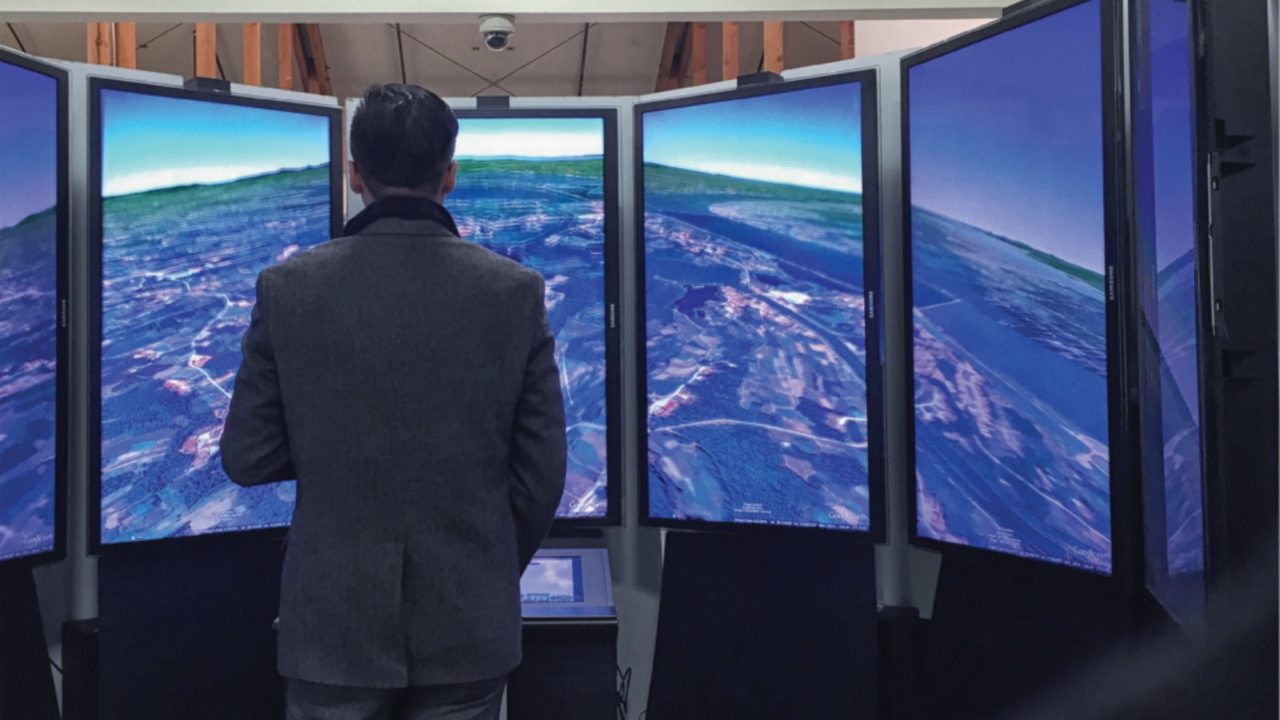 First-year MBA Winston Ling views Earth from an outer space point of view while visiting Google headquarters in Mountain View, California. “Googlers” can spend 20 percent of their time working on side projects related to the business. One of Google’s engineers created the viewing booth—an interactive toy essentially—so people could use it to go around the Earth from space. Google’s Heather Webb, MBA’07, hosted the Vanderbilt visit. Photo Credit: Samantha Levine
What lies behind Owen’s growing presence in the tech industry? 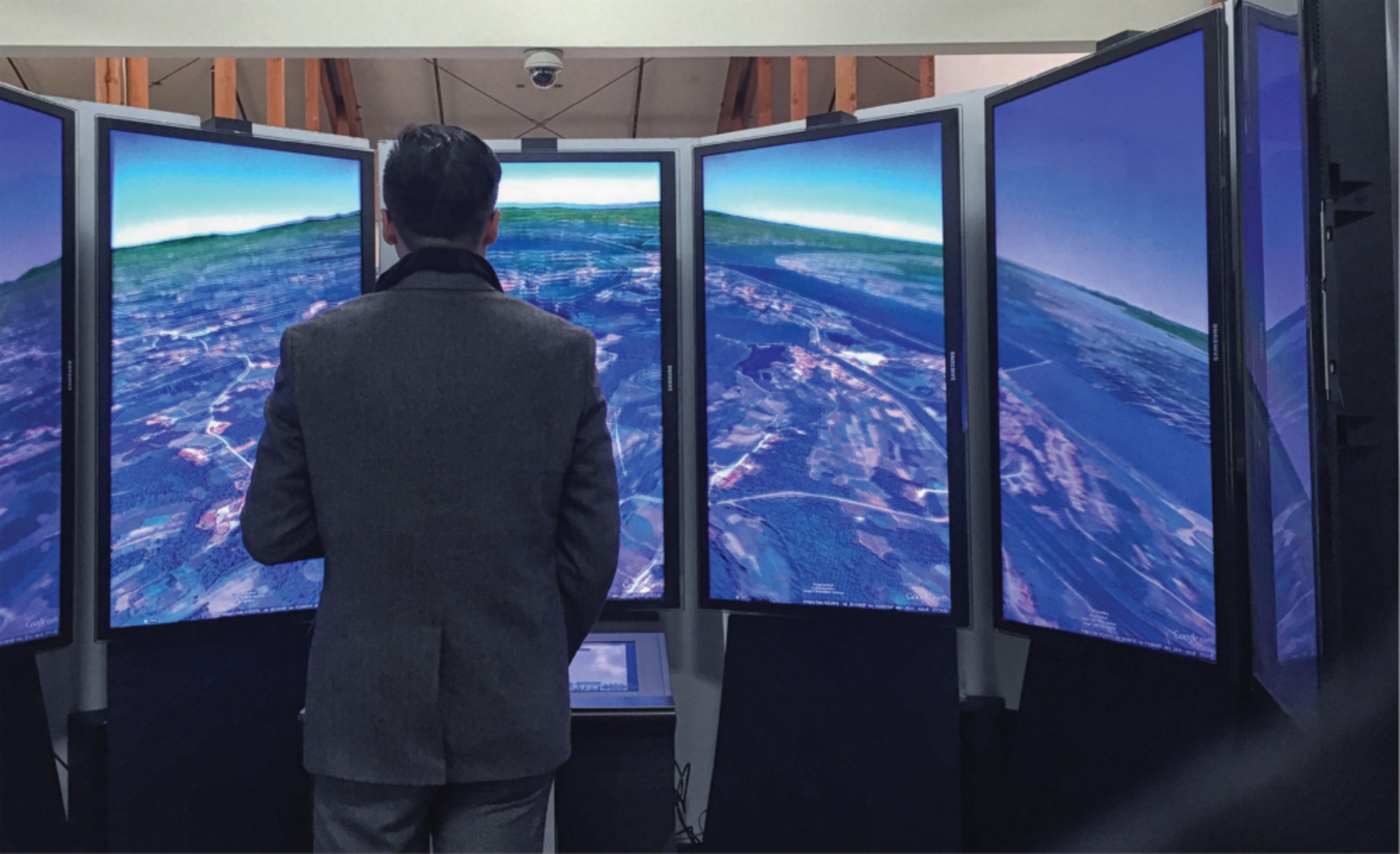 First-year MBA Winston Ling views Earth from an outer space point of view while visiting Google headquarters in Mountain View, California. “Googlers” can spend 20 percent of their time working on side projects related to the business. One of Google’s engineers created the viewing booth—an interactive toy essentially—so people could use it to go around the Earth from space. Google’s Heather Webb, MBA’07, hosted the Vanderbilt visit. Photo Credit: Samantha Levine 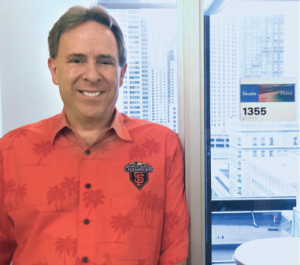 Janes took the dean’s words to heart. When he joined FedEx after graduation, the company was just starting to track packages digitally. Little more than a decade later, as its first VP of e-commerce, his division had emerged as one of the company’s fastest growing segments.

By 1998, Apple snatched him away as the first VP and general manager of the tech giant’s global online retail operation, working for now-CEO Tim Cook. After Apple, he moved on to senior executive roles at StubHub, FanSnap, and is now chief marketing officer at the startup Vacatia, which has attracted significant Silicon Valley investment to launch an AirBnB-like resort marketplace for vacationing families.

For all his success in the tech industry, Janes says he continues to enjoy innovating, disrupting and creating value. “I like to lay the tracks. I don’t want to drive the train,” he says.

In many ways, Janes’ career path has also foreshadowed today’s explosion of interest in tech jobs, both among Vanderbilt business school graduates and vast new companies that either didn’t exist, or barely existed, a generation ago.

In 2015, Amazon hired more Vanderbilt MBAs than any other company, and a full 19 percent of the class reported going into the technology sector with salaries roughly equal to financial services. By comparison, 11 percent of Vanderbilt graduates accepted technology jobs in 2007, often at lower starting pay than other fields.

Dean Eric Johnson, himself a well-known presence in Silicon Valley, says Vanderbilt’s management programs are well-positioned to teach the skills necessary to thrive in the tech sector. “Technology is changing not only how business is conducted but how it’s taught,” Johnson says. “The learning styles of millennials are pushing them toward experiential, immersive curricula.”

The school has added curriculum including marketing analytics and optional seminars where students can learn to use developer tools, like the popular Ruby on Rails, to create their own web apps. And this year, Vanderbilt is offering a class called Innovation Realization, which brings together students from law, engineering and business to develop a commercialization strategy around a new technology that’s been developed at the university.

Outside the classroom, an annual Tech Trek—a whirlwind week of visits to Google, Amazon and other tech titans on the west coast—has been growing more popular each year, often leading students to first-year internships, and ultimately, full-time jobs.

Despite the move to help prepare students better for a career in tech, it’s impossible to fully keep pace with the industry. “You’re always innovating, trying to be on the cutting edge,” says Brad Rosenfeld, MBA’13, general manager of Amazon’s publishing venture. “In tech, you’re building and launching rather than sustaining and maintaining.”

Speed is one trait that sets technology apart from other industries. There’s always pressure to be ahead of the curve, says Keith Whitman, MBA’11. He says he forecasts multiple industry outcomes about the future of tech on a regular basis in his job as a manager in long-range planning at Intel.

Intel maintains massive portfolios of intellectual property—game-changing technologies still years away from turning into tangible products. “There’s a huge risk that you will miss a major find, which may not become apparent until years, decades even, after it’s missed,” Whitman says. At Intel, he is constantly looking out for the impact of global trends on technologies that aren’t even to market yet. “For better or worse, I think we’re always looking forward.”

Along with the fast pace and future focus of the tech industry, it is uniquely diverse, Whitman adds. Companies that build hardware versus those that create software, for instance, differ tremendously in their day-to-day operations. Also, he says, overlap within the industry is common. Fortune 500 tech companies are enmeshed—Apple is one of Intel’s largest customers, for example.

While many tech companies are intent on speeding towards the future, their organizations often have to play catch up in traditional business functions like finance and HR—sometimes putting their own twist on things.
Latia Harris, MBA’13 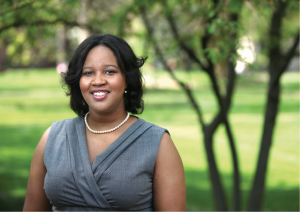 That’s what led Latia Harris, MBA’13, to Hewlett Packard Enterprise, where she jumped into human relations work in the company’s new customer advocacy department. Harris says she’s essentially a storyteller—communicating how HPE can strategically solve problems for customers. “There aren’t clear-cut answers,” she says, since each customer brings unique challenges to the table. To be good at her job, she says she must be comfortable doing what she calls “living in the gray.”

Harris credits her Vanderbilt education for helping her navigate this role. “I didn’t learn ‘how to do HR,’ I learned how to think through messy things,” she says. “I apply that every day in this role because we’re learning it as we go.”

HP’s customer advocacy department is an example of a major player in tech reinventing itself internally. In fact, tech companies of all sizes must constantly adapt—though blue-chip companies like Intel, Cisco and Hewlett-Packard do so differently than Box, Pinterest, Salesforce and Snapchat.

“Tech’s kind of a monster on its own,” Intel’s Whitman says, adding, “in a good way.”

The common thread is people. Amazon’s Rosenfeld says the most important skill in the industry is the ability to connect well with others who see the world differently. Vanderbilt is very good at developing those traits in students, he adds, because the school is fundamentally collaborative rather than cutthroat. “In the tech space, it is critical to be able to relate to individuals who have different incentives. To reach a common goal, you must have that ability to form human connection,” he says.

Frank Lawrence, MBA’99, chief compliance officer at Facebook and an alum of Google and Coinstar, says at most tech companies you’ll never be in some office by yourself clicking away on a computer. “Everything happens though relationships and collaboration. At any of the Silicon Valley giants, you have got to get that skill set down.” 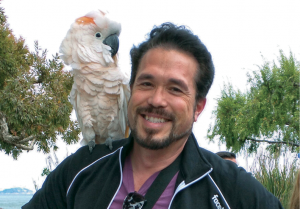 Lawrence says top minds at tech-centric companies understand how to leverage the strengths of a diverse team. “Leaders in tech are not very hierarchical. They think in flat terms,” he says. “They want input from people no matter what level they are.”

A strong team, he says, is a diverse one, which is why graduates from Vanderbilt, with its collaborative culture, do so well in these flat organizations. Good companies like Facebook and Google are looking for diverse employees who solve problems in unique ways.

The ability to communicate and work well, and quickly, with people from many different backgrounds, makes Vanderbilt graduates stand out, says Dean Johnson. The school’s long-established collaborative culture develops graduates well-suited to thrive in the massive, unusually diverse and breakneck-paced technology industry.

“The skills we teach and the way we live here are centered on collaboration, which fits in well in the technology sector,” he says. “Those companies all live and breathe that—it’s very much the way they see the world.”

Google, for example, is famous for its collaborative culture. They really do walk the walk, according to Heather Webb, MBA’07, who moved to Google as a human relations manager nearly a year ago. Much of her career has been spent at GE, and throughout it, her job has involved coaching corporations through major transformations. She says that one of the tools from business school that sticks with her and remains on her desk is The Heart of Change, a book Professor Dick Daft assigned to read at Vanderbilt.

The trick to change, she says, is to understand that people are driving it. “I think people will tell you they’re very data-driven, but at some point, you have to have add a human heart and touch to everything,” she says. “At the end of the day, people are people, and they want to know there’s someone there to listen to them.”