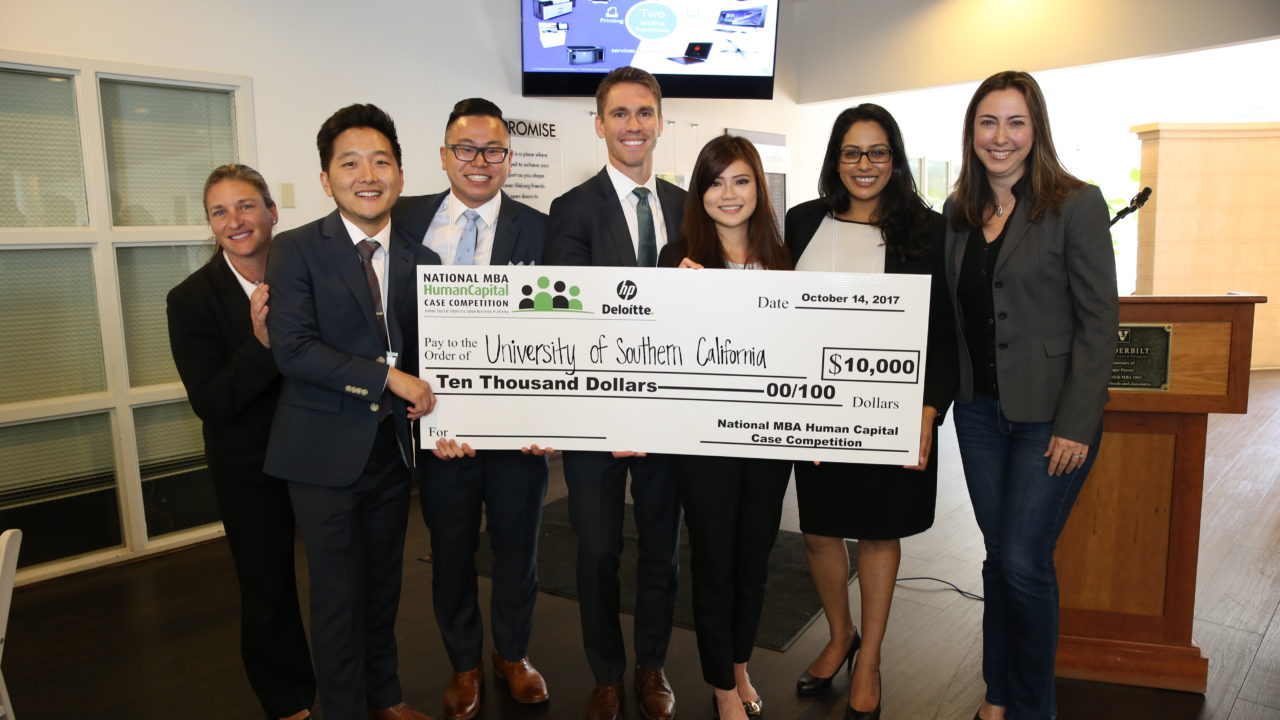 The USC team poses with the judges and their winnings
Teams from 12 business schools around the country competed for $14,000 in prize money

Now entering its 11th year, the National MBA Human Capital Case Competition (HCCC) challenges participants to come up with solutions to complex hiring, staffing, and performance issues. The competition gives MBA candidates from around the country a chance to think critically about human resource issues and network extensively with corporate sponsors Deloitte Consulting and HP Inc. A combined total of $14,000 in prize money is distributed between the top three teams.

“I think it’s important to have (the competition) to show that human capital and human resources…are just as important to business as finance and accounting and marketing,” said Daniella Gafen (MBA’18), Director of the HCCC. “It’s a great way to get hands-on (experience) thinking about real problems…If you don’t have great people in the right places in the right organizations with the right support, you’re not going to be able to do anything.” 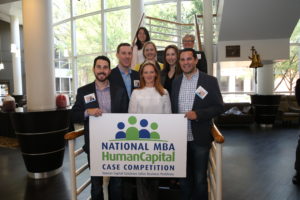 Representatives from HP Inc. (pictured here) as well as Deloitte networked with participants throughout the weekend

The Case: A national company that provides at-home care for the elderly is looking to hit $3 billion in revenue by 2025 by expanding its operations domestically and abroad. These plans for growth come as the home health care industry faces high turnover and a projected shortage of workers. Teams were tasked with coming up with a strategic plan to retain employees and reorganize the business for expansion.

Teams were given the case a week in advance. However, 1.5 hours before they were supposed to present on Friday, they were confronted with a sudden twist: a major data breach, which they had to incorporate into their final decks.

On Saturday, the three finalists had to trim their decks to just five slides and present again. Teams were assigned country-themed code names during the competition so they would be rated anonymously.

The Winner: The team from USC (a.k.a Stomp’N’Slide) walked away with $10,000 in prize money for its idea to open a new service division, which would provide help around the home for elderly adults, such as lawn care. Boston University took the second-place prize of $3,000, while Cornell placed third and received $1,000. 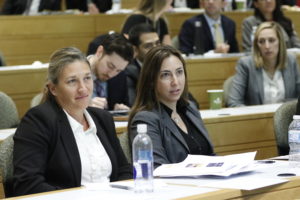 The Judges’ Feedback: “I really appreciate the time and investment you all made into this,” Lesko thanked participants at the end of the competition. “We learned a lot, and we had such a great experience being here as judges. We hope you can say the same thing.”

“The growth mindset has been particularly incredible over the past couple of days,” added Duarte. “We actually took into account not only the (final) performances today, but also the performances over the last couple days…and that’s how we ultimately arrived at our decision (and declared a winner).”

The Students’ Feedback: Whether they win or not, students see the case competition as a valuable way to prepare for human capital recruiting. “These case competitions really offer the best simulation of what it’s like to work with a client and (address) a business problem where you’re trying to use human capital to solve the issue at hand,” said Ricky Chan (MBA’18), who competed in the HCCC last year and served as team captain for the Owen team this year.

The case competition doesn’t just help students prepare for interviews, but also to critically analyze human resource strategies in general. “It’s not just the case interview, it’s thinking about the larger human capital issues, because there are trends and themes that come up no matter if the case is health care or (another industry),” said fellow Owen team member Penny Dolan (MBA’19).