A Design for Happiness

The real complaints began in October 2017. Neighbors didn’t like the sight of the vent sticking out of the window, not to mention the smell. The sound of the machinery bothered nearby residents, even during the middle of the work week. Eventually, her landlord gave Taneisha Gordon (MBA’18) an ultimatum: shut down the laser cutter, or find a new place to live. 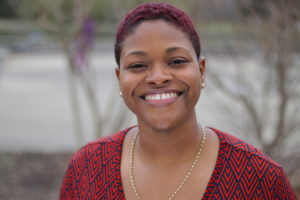 The second-year MBA and founder of Sukhino Designs chose the former — but she wasn’t deterred. She found space at a local coffee shop to run her machinery, which she uses to cut designs for a variety of wood-based products, such as notebooks, pins, and wine butlers. To sand the pieces into final form, she uses a storage facility, or a field near town.

The pursuit of “Sukhino,” or happiness, has taken Gordon across the country and back, into empty fields and coffee shop basements, to help her find a spark that will benefit herself and others in turn. “My business is my light,” she says. “I can’t be a light in other people’s lives if I’m not a light in my own.”

It’s a tenant of a philosophy close to her heart and tattooed on her leg — Lokah Samastah Sukhino Bhavantu: “May all beings everywhere be happy and free, and may the thoughts, words, and actions of my own life contribute in some way to that happiness and to that freedom for all.”

Gordon first took up wood cutting as an undergraduate student at Tuskegee University. The Architecture major used the school’s laser cutter to make paddles, keychains, and other branded paraphernalia for fraternities and sororities. It was a side business, but a pretty successful one (and not without residential challenges — “I did everything in my apartment, my roommate hated me,” Gordon recalls with a chuckle).

After graduation, Gordon joined a construction company in Colorado, working as an estimator. “It was the worst best time of my life,” she says. The Macon, Georgia native had never lived so far from home and didn’t know anyone in the Centennial State. She didn’t enjoy her job, and being the only black female under 25 at the office left her feeling isolated. “People didn’t know how to talk to me, so it was really awkward,” she says.

I can’t be a light in other people’s lives if I’m not a light in my own. – Taneisha Gordon

Health problems began popping up. She was diagnosed with a degenerative disc disease in her neck; in late 2015, she contracted an extended case of pneumonia, compounded by a previously undiagnosed case of asthma, triggered by stress and anxiety from her job.

The asthma diagnosis was the last straw — Gordon was already applying to business schools, but she ended up submitting her letter of resignation in April. “The stress immediately went away,” she recalls. Gordon received her acceptance to Vanderbilt a week later.

Gordon had no doubts about her entrepreneurial intentions heading into Vanderbilt. “I knew I wanted to own my own business,” she says, “but I didn’t know what it was going to be.”

After exploring several concepts ­— water bottles, gyms, and rental apps, among others — she took another look at laser cutting. As a student ambassador at the Wond’ry, Gordon found herself in an atmosphere of creativity, surrounded by industrial equipment at the center’s makerspace.

Roughly a year after leaving her job in Colorado, she purchased a laser cutter and started developing designs. She made her first sale in May 2017, at the Wond’ry’s “Muster Across America” event. 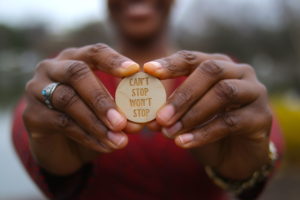 Help has come in other forms as well. Mario Avila, Director of the Turner Family Center for Social Ventures, has been “a sounding board and a business mentor, the person that tells me the truth when I don’t want to hear it,” she says with a chuckle. Librarian Rahn Huber assists with research. She also received financial recommendations from fellow MBAs (Radhika Salve [MBA’18]) and Ashish Gupta [MBA’18]) and marketing strategy from a Master of Marketing student (Amanda Twitty [MMark’17]).

“It was cool to see that other people saw my passion and vision and believed in it,” Gordon says.

From a marketing prospective, the two Ps that seem to occupy Gordon most these days are Product and Placement. 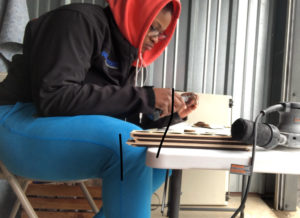 The laser cutter, logistical issues aside, offers tremendous flexibility with form and design. Gordon can create a seemingly endless list of products. She began with spiral notebooks, then moved to pins, wine butlers, and desk plates. Recently, she’s come out with a line of wall art that features renderings of Greek letters.

Gordon is also working on identifying her priority distribution channels. Sukhino Designs has a presence in retail (Hillsboro Village’s Tennessee Chic) and has been featured in trade shows, and the company’s website offers products as well.

The biggest placement on the young entrepreneurs mind these days might be her own. Her coffee shop is considering a move, so Gordon must consider transplanting her operation again, preferably to a location that can house her entire supply chain. She’s looking at Nashville and Atlanta for possible locations but hasn’t made up her mind yet. At the moment, she’s starting a crowdfunding campaign to fund a workspace. 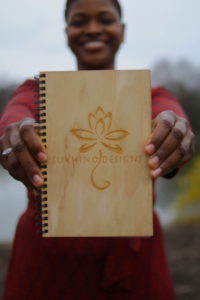 Coming into her final mod at Vanderbilt Business with many questions unanswered, Gordon’s focus on positive affirmation remains consistent. “The biggest reason why my pins and notebooks touch people is the messaging,” she explains. “As I move more into ecommerce, it’s going to be motivational-driven. I think it’s important, to have that positivity around.”

Gordon admits that her current situation makes her nervous — “working in the corporate world, it was nice to have guaranteed money” — but she knows that entrepreneurship is the path she’s supposed to follow. “It’s something I’m excited about,” she says, “and it allows me to create and use my hands.”

Moreover, in the spirit of the mantra inked on her leg, she wants to impart that excitement to others like her. “At the end of the day, owning my own business is what I’m supposed to be doing. I’m here to spread that to other girls who look like me, who want to be creative. I want to be able to eventually mentor girls, to show them you can take your creativity and make it into something, and you’ll be fine.”