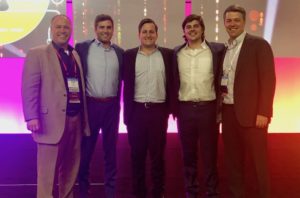 The Vanderbilt team — Burke Wiggins, Roger Mecham, and Joseph Cavicchi (all MBA’21) — learned about the competition through an email from the Owen Real Estate Club. An Owen alum and CoreNet member, Ian Prunty (MBA’11), had reached out to the club to notify leadership of the competition. The club leaders then passed the opportunity along to its members, and the three first-year MBAs decided to apply for it. “We thought, let’s put our name in the hat and see what happens,” Mecham said.

The competition challenge asked students to “play the role of an internal corporate real estate team in order… (to) develop a proactive strategy to: (a) ‘Recession-proof’, to the extent possible, the corporate real estate portfolio, (b) continue to support the business objectives of the corporation and (c) ensure that such a strategy does not negatively impact the company in the unlikely event that a recession does not materialize.”

The competition is open to undergraduate and graduate students all over the world. Forty-two schools from 35 universities across 18 countries applied to the first round. A few weeks later, the Vanderbilt team was notified they were one of three finalists selected to fly to Anaheim to present at the conference. The other finalists were teams from the University of Washington and the Breda University of Applied Sciences in the Netherlands.

“There are a lot of heavy hitters in the industry there,” Mecham added. “Before we went on out there, we said ‘Our biggest goal is to network, shake hands, get business cards, and then our second goal is to actually win the whole thing.’” 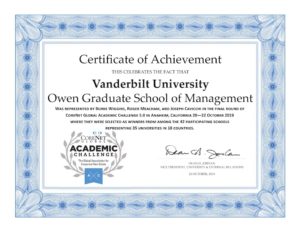 The certificate the winning team received

The team presented to an audience of more than 150 people for about 15 minutes, followed by five minutes of Q&A. Judges included directors of real estate for major corporations such as Oracle, Airbnb, and Kraft-Heinz.

Later that day, the judges announced the outcome of the competition and named Vanderbilt the winner. The team received $5,000 in prize money as well as a certificate from CoreNet. “When they announced our name, we felt ecstatic. It was really surreal,” Mecham said.

CoreNet Global is a non-profit association, headquartered in Atlanta, GA, representing more than 11,000 executives in 50 countries with strategic responsibility for the real estate assets of large corporations. The organization’s mission is to advance the practice of corporate real estate through professional development opportunities, publications, research, conferences, designations and networking in 46 local chapters and networking groups globally. Visit the website to learn more.

The Owen Real Estate Club is organized to foster understanding of the role of real estate, share knowledge of careers in real estate, provide opportunities for students to exhibit knowledge and skills to employers, and encourage and facilitate development of relationships among Owen students and real estate companies in the Nashville community and across the country. The club hosts informational meetings, sponsors guest speakers, and encourages students to get involved with real estate projects with companies in the greater Nashville community. For more information, visit the club’s website or contact President Benjamin Dachille at benjamin.dachille@vanderbilt.edu.