The Business of Governing

Steven Reed wins a historic victory as Montgomery’s mayor during a time of crisis.

By Kevin Jones is a Seattle-based writer who writes for corporations, nonprofits and universities. His work often focuses on sustainability, corporate social responsibility and higher education. 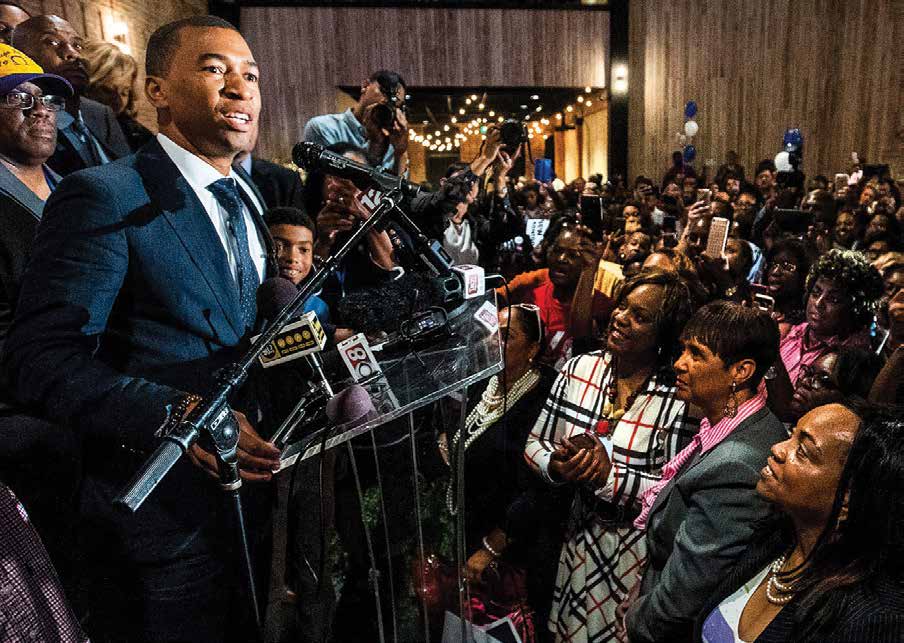 In the early weeks of COVID-19’s arrival in the U.S., Steven Reed, MBA’04, the newly elected, 46-year-old mayor of Montgomery, Alabama, peered into the future and did not like what he saw. Studying epidemiological charts and listening to public health experts, he understood that the novel coronavirus had the potential to hit his city hard. He understood that testing levels in his state were insufficient, especially among African Americans and rural residents. He saw that, like most cities in America, Montgomery was hamstrung by a lack of test kits. And he bet that a frantic scramble for kits would take place among governors. So Reed picked up the phone and dialed not FEMA, not the CDC, but Hyundai.

“I went to Seoul in the fall and got the chance to visit with some of Hyundai’s executive leadership,” Reed explains. “When I read about the steps South Korea had taken to flatten the curve [of COVID-19], I thought it was well worth the effort to ask Hyundai to send us tests and equipment, not only for Montgomery, but also for the state of Alabama.” Hyundai, whose only U.S. factory is in Montgomery, agreed to send 10,000 kits. The company also provided face masks and food for health care providers.

Reed cites his decision to contact the automaker—in which he reached across lanes, called on a relationship, and was thinking several steps ahead—as just one example of how he applies his education from Vanderbilt’s Owen Graduate School of Management.

“Every day I draw on that knowledge,” says Reed, who still has the numbers of some of his Vanderbilt professors in his phone. “Whether it’s the discussions we had as classmates, or working as teams on projects, or the lessons we got from professors, there’s not a day in this office that I don’t apply a takeaway from that experience.”

Steering his city through a pandemic is just Reed’s latest encounter with history. Last November he became Montgomery’s first African American mayor. It’s a weighty honor in a city whose population is 60 percent Black and whose history is the story of American race relations in microcosm. Montgomery has, through time, been a nexus in the slave trade, the first capital of the Confederacy, a violent exemplar of Jim Crow, and the site of some of the civil rights movement’s best-known triumphs.

It is a city where young Black men and women still graduate from a high school named for the only president of the Confederacy, Jefferson Davis, as Reed did. It’s a city that, like many in America, still wrestles with socioeconomic disparities that break down along racial lines.

Anyone can lead when it’s sunny and blue skies. Leaders who can lead you through a crisis are the ones who prove their worth.

Reed ran on an ambitious agenda that stressed unity and proposed transforming virtually every aspect of civic life—education, public safety, economic opportunity, health, culture and more. He is intent on changing the world’s perception of Montgomery as a city mired in the Old South. More than two-thirds of Montgomery’s voters cast their ballots for him. It is safe to say that expectations for the new mayor are high.

“I think Steven deserves to be put on the same kind of pedestal that we put Owen School alumni who are CEOs and company founders,” says David Owens, professor of the practice of management and innovation at Owen and the Evans Family Executive Director of the Wond’ry, Vanderbilt’s Innovation Center.

“We were founded as a ‘management’ school very deliberately, without regard for what type of organization was to be managed.
And so, his becoming a mayor—especially a frame-breaking one who is a champion of social justice—is a huge win, both for the school and him personally. … Steven is a real success story and a model of leadership.” 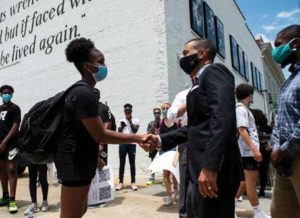 Organizer Grace Jackson shakes hands with Reed at a racial injustice protest June 3, 2020. Unlike in some other cities, protests in Montgomery have been largely peaceful. 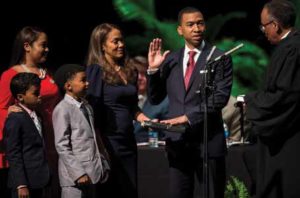 Reed is sworn in as Montgomery’s first Black mayor Nov. 12, 2019. His wife, Tamika, and their three children stand with him as the oath of office is administered.

The politics of change are in Reed’s DNA. His father, Joe L. Reed, is a bona fide civil rights hero, a longtime activist and Democratic Party leader who, among other achievements, took part in sit-ins as a college student to integrate Montgomery lunch counters, was among Montgomery’s first class of African American city councilmen in the 1970s, and later sued to redraw Alabama’s legislative map so that it better reflected racial demographics. The elder Reed was an associate of Martin  Luther King, Jr. His son keeps a photo of the two men in his office. Even so, breaking down barriers in public service was not the role a younger Steven Reed initially envisioned for himself. After majoring in business at Morehouse College, he planned to break down barriers in corporate America instead.

“I fully expected to be CEO of a Fortune 500 company,” he says. “I went into business because I thought the next challenge in the country was bringing about more economic parity. I did not see African American leadership in corporate boardrooms or C-suites.”

But after holding financial analyst positions with American Airlines and a consulting firm, Reed caught the bug of entrepreneurship. It was while studying at Owen, hungrily reading Black Enterprise and its stories of African Americans launching successful companies, that he decided to try making his own way. MBA in hand, he departed Nashville to become managing partner in a Roly Poly Sandwiches franchise in Montgomery, with hopes of opening several locations. He says the four years that followed were like a second round of grad school.

“I learned as much as a small business owner in the restaurant industry as I did at Owen,” Reed remembers. “This was about the School of Hard Knocks, and learning that what you project in your business plan is not always the way things work. I think some of my fellow alums can probably identify with that. The foundation I got at Owen was great, but you learn a lot out there on your own.”

Partly as a result of that experience, small businesses have been at the front of Reed’s mind from the start of his planning for COVID-19. Among other measures, he created two committees focused on economic and community recovery early on, and he set up a conference call with the regional administrator of the U.S. Small Business Administration so business owners could better understand relief available under the CARES Act. When he issues an order or holds a press conference, he says, he is particularly mindful of how his actions and words will affect the business community.

“When we got to where it looked like businesses were going to have to close, I thought, man, if I were in business now, what would I need?” he says.

It was while working as a restaurateur that Reed experienced a second revelation regarding his career path, thanks to another brush with history. In 2007 he was part of the congregation at Brown Chapel AME Church in Selma, Alabama, that heard presidential candidate Barack Obama commemorate the legendary voting rights march that originated in that city.

“Obama said, ‘There’s a poverty in ambition in doing things just for money,’” Reed recalls. “And everything I was doing was about, ‘How much money am I going to make? Where is this going to get me financially?’ I wasn’t considering the indirect impact of being in business. And I started thinking more about public service and how I could make an impact.” Inspired, Reed started a government relations firm before serving as senior aide to Alabama’s lieutenant governor. Frustrated by entrenched politics and the apparent inability of elected officials to innovate in the face of intractable problems, Reed voiced his dissatisfaction to a friend, who challenged him to run for office. In 2012 voters chose Reed as probate judge of Montgomery County, the county’s highest elected office. He was the youngest person to hold the post and the first African American.

In Alabama, county probate judges oversee a variety of public records administration, including marriage licenses. In 2015, Reed made national news by issuing licenses to same-sex couples in defiance of an order from state Supreme Court Chief Justice Roy Moore. The famously conservative Moore had instructed probate judges to ignore a federal court’s ruling that struck down Alabama’s ban on same-sex marriage. Unlike most of his fellow judges, Reed issued the licenses anyway, while also taking Moore to task in interviews. He called the chief justice’s rhetoric “dog whistles” and tweeted that the order was “sad and pathetic.”

Moore’s order contributed to his eventual removal from the bench. Looking back, Reed says his response to it was an easy call to make. “I didn’t think it was enough just to make a stand,” he says. “I thought [my disagreement] needed to be communicated and shared because I thought Justice Moore needed to be shamed. You have to call bigotry what it is.” 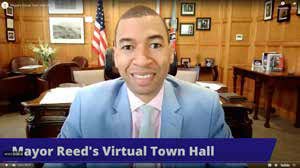 Reed has led a series of virtual town halls for the citizens of Montgomery throughout the COVID-19 crisis.

Asked what the experience taught him about the confluence of politics and principle, Reed says, “It taught me that not everyone is a leader. I saw that we have more managers than leaders. Not a lot of people are willing to show courage. It’s easier to do things out of political expedience than to do things for a just cause.”

Four years later Reed again made headlines by winning Montgomery’s mayoral race. In a term that kicked off with a historic public health crisis and, in the wake of George Floyd’s murder, a national conversation about the transformation of policing, opportunities for Reed to show courage will not be in short supply. As once more he looks a few moves ahead, the Owen grad says he does not expect the demands of COVID-19 to sideline his bold agenda.

“It’s possible some things may have to be re-prioritized, but I don’t believe you give up on what you pledged to people,” he says. “We’ll just have to be innovative in our approach to accomplishing those things in spite of the adversity we’ve been dealing with.

“It’s kind of like in sports,” muses the former Morehouse cornerback. “You can’t control the weather, but you still have to do your job, and you still have to make sure you’re accountable. But how you win might be different.”

Reed, a father of three wed to Tamika Reed, a lawyer for the Alabama Education Association, doesn’t rule out going back into business one day. He says he’d still like to help make corporations more inclusive, both in who runs them and in whose lives they improve. But for now, he feels like he’s where he should be, with marching orders that are clear. And hearing him talk about leading his iconic, 200-year-old city into uncharted territory of all kinds, it seems that no one’s expectations of Steven Reed are higher than those Steven Reed has set for himself.

“Anyone can lead when it’s sunny and blue skies,” he says. “Leaders who can lead you through a crisis are the ones who prove their worth.”

Written By
Kevin Jones is a Seattle-based writer who writes for corporations, nonprofits and universities. His work often focuses on sustainability, corporate social responsibility and higher education.