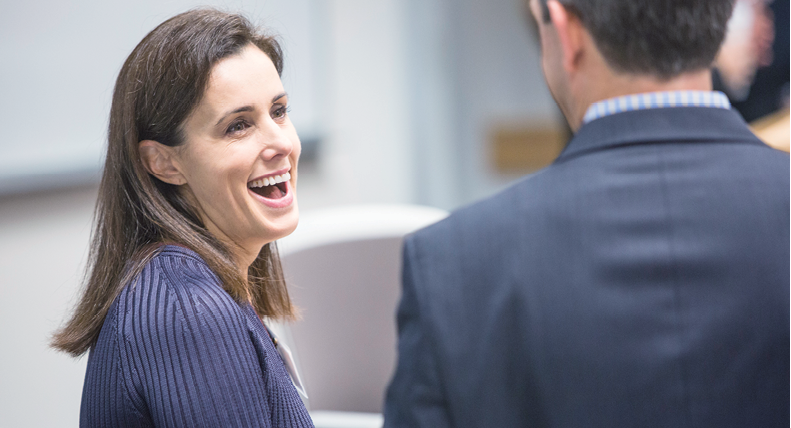 Maria Renz spoke on campus in October at an Opening Bell networking breakfast. She was in Nashville as a member of the Owen Alumni Board.
An Owen grad is one of the top women in tech

Maria Renz spoke on campus in October at an Opening Bell networking breakfast. She was in Nashville as a member of the Owen Alumni Board.

In 1957 a high school counselor told Maria Renz’s mother that her ambition to be a nurse was too lofty.

“As a result, my mom always said—with so much conviction—that you can be whatever you want to be,” says Renz, MBA’96. “And I believed it.”

Today Renz holds a coveted job in the business world. She is the technical adviser to Jeff Bezos, CEO of Amazon, the largest web-based retailer in the United States. Informally known as Bezos’ “shadow,” the technical adviser has the ear of Amazon’s legendary founder and contributes to both daily and big picture decisions.

“It’s similar to a chief of staff position,” she says. “I spend my days with Jeff and my goal is to make him an even better CEO.”

Typically, Amazon technical advisers hold the position for 18 months to two years before moving on to another prominent position within the company. Renz, the first woman picked for the job, started in marketing at Amazon 16 years ago. In the time since, she helped launch Amazon’s game-changing free shipping policy, launched several retail categories such as Health & Personal Care, Beauty, Shoes, and Groceries; led Physical Media and Canada; and held various leadership positions at Amazon subsidiaries.

“I’m viewing the technical adviser position as a chance to step out of my usual territory and take stock of all the different facets of the company,” Renz says. “I haven’t figured out where I want to go next but I’m definitely enjoying the view.”

Curiosity about how the various parts of a business worked together is what propelled Renz away from her original career in interior design. After graduating from Drexel University, the New Jersey native’s first assignment was remodeling a corporate headquarters.

“As preparation, I met with everybody from the security guard to the front desk to the CEO,” she says. “I saw that all these different departments come together to create something of value to consumers.”

After a few years, Renz decided to change her direction by earning an MBA. “I was convinced that having a background in creative problem-solving was great preparation for a career in business,” she says. Some business school admissions officials, however, had reservations about her interior design education and work history. Not Vanderbilt.

“When I met with Vanderbilt, they embraced that. They were so open and so supportive,” Renz says.

A combination of hard work and family grit led to her success, Renz believes. The tradition will hopefully continue through her two children with husband and Vanderbilt alumnus Tom Barr, MBA’98, a former Starbucks executive and current president of Sono Bello, a national leader in body contouring and facial rejuvenation.

“My father is an engineer but he was the first in his family to go to college,” Renz says. “My mother didn’t get the opportunity to go to college. They had an expectation that school was really important and that you carry yourself as a member of the community not only on behalf of yourself but on behalf of your family. I don’t know if that is necessarily ambition, but it empowered me.”

Renz and Barr recently acknowledged the importance of school and family by launching a new scholarship named after their mothers. The Carol Barr and Margaret Renz Scholarship will support female students attending the Owen school.

You can almost hear Margaret Renz say, “You can be whatever you want to be.”