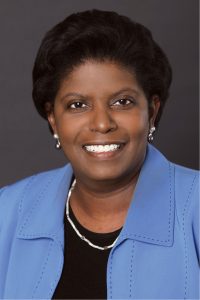 Belinda Grant-Anderson, BE’83, MBA’90, earned a Vanderbilt School of Engineering degree and is in leadership at one of the world’s largest telecommunications companies. So what does the engineer say is her company’s top advantage? People. “People are the greatest asset we have,” she says, “and diversity makes us a stronger, more competitive company. Research has shown that a diverse workforce is more innovative and able to come up with better solutions to problems.”

As vice president for diversity and inclusion at AT&T, Grant-Anderson works both to create a supportive environment for employees from a variety of backgrounds and to help the company build a heterogeneous pipeline of talent. “Diversity helps us recruit the best workers,” she says. “Look at how the world and the demographics of our country are changing. People come here and see a lot of employees like themselves. We want our leadership to reflect a variety of backgrounds, and we hold them accountable for diversity and inclusion initiatives in their areas.”

“All companies use technology and need their employees to be computer-savvy,” she says. As a Fortune 500 telecommunications company, AT&T also needs employees with technical skills or aptitude. That can be a challenge when seeking people of diverse backgrounds. STEM jobs (science, technology, engineering and math) are in demand throughout the nation, but interest in technical careers is low among women, people of color and others who make up a diverse workforce.
“The good news is that AT&T is able to attract talented people from different backgrounds because of our record of inclusion. We’ve been on the journey since 1968,” she says.

Her job includes partnering with groups such as the Society of Women Engineers, the National Center for Women and Informational Technology, INROADS and other organizations for African-American, Hispanic and Asian students and those with disabilities.

“We’re also investing in our future employees in middle and high school through organizations like the Girl Scouts and Girls Who Code,” she explains. “In addition, AT&T has a mentoring program called ASPIRE, which helps to keep at-risk students from dropping out of school.”
The company also invests in its current, nontechnical employees to move them onto the tech track. “We help employees transform themselves through certification programs, online learning platforms and online master’s degrees in technology,” she states.

A native of Jacksonville, Florida, Grant-Anderson followed her father’s advice to study engineering, earning a bachelor’s degree in chemical engineering from Vanderbilt. Following graduation, she worked for Proctor & Gamble’s research and development division in Cincinnati for five years. Realizing that she needed an MBA to become a decision-maker who could influence a company’s future, she decided to return to her alma mater and enroll in Vanderbilt’s Owen Graduate School of Management. 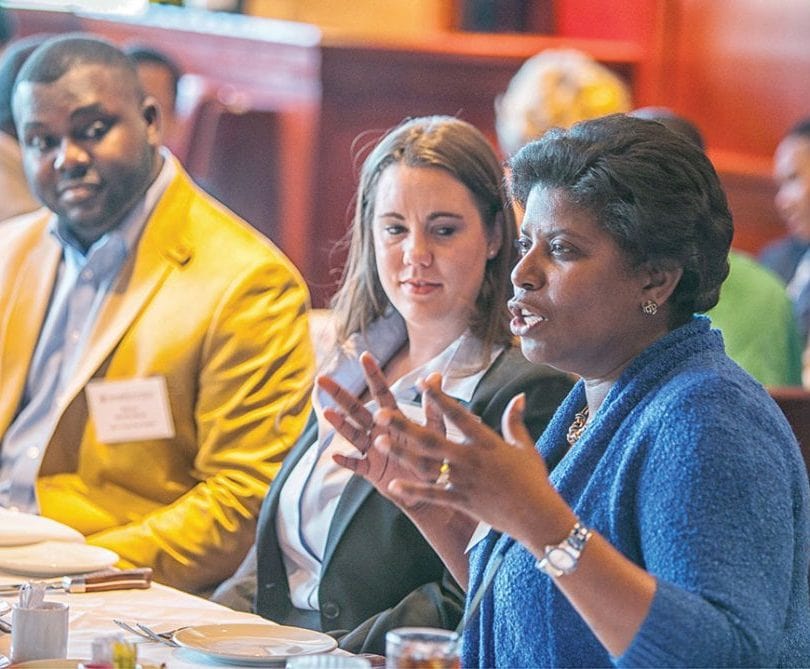 Belinda Grant-Anderson is a past member of Owen’s Alumni Board and a current Board of Visitors member. In 2013, she was the keynote speaker at the school’s Diversity Symposium.

“I looked at a lot of programs,” she remembers. “Owen had a great reputation, and they focused on team work. That’s what I wanted—to be part of a team, learning from my peers in a cooperative environment.”

With her MBA in hand, Grant-Anderson became a consultant with the Atlanta office of McKinsey & Company, a global management consulting firm. During her eight years with McKinsey, she rose from associate to senior engagement manager.

In 1998, she joined the former Bell South, which later merged with AT&T. She has served as executive director, division president and vice president in several different areas, including people development, regulatory and external affairs, operator services and strategic management.
Her current role includes partnering with company business units to achieve their annual diversity goals, overseeing the diversity and inclusion awards submission process and managing AT&T’s relationship with external research partners.

“My personal formula for success includes consistently exceeding expectations, taking measured risks, being a team player and helping others develop,” she says.

Outside measures of diversity

During her tenure, AT&T has received numerous awards, including being named a Top Company for Diversity by DiversityInc, No. 1 Company for Diversity by Hispanic Business Magazine, a top 40 company by Black Enterprise, DiversityMBA’s Company of the Year and a top company for executive women by the National Association for Female Executives. It also has received a perfect 100 percent score on the Human Rights Campaign’s Corporate Equality Index for 12 consecutive years.

Grant-Anderson credits the company’s top leadership with making those accolades possible. “You absolutely have to have support at the top of the company,” she says. “Our chairman and CEO, Randall Stephenson, and his officer team understand the value of diversity. They drive the support throughout the organization.” 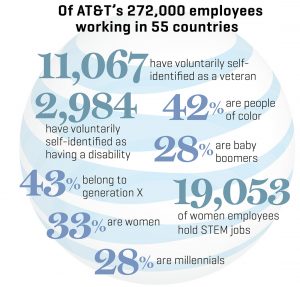 Grant-Anderson and her staff of 10 oversee a dozen employee resource groups (ERGs) composed of 110,000 employees. The groups support African-American employees, Hispanics/Latinos, Native Americans, Asian/Pacific Islanders and Asian Indians. There also are groups for military veterans, people with disabilities, the LGBT community and employees of different generations. All ERGs are open to all AT&T employees.

Currently a resident of Dallas, Grant-Anderson and her husband of 21 years are the parents of two daughters. As a 10-year survivor of breast cancer, she stresses the importance of annual mammograms and encourages others facing the disease. She is a member of the Owen’s Board of Visitors and a past member of Vanderbilt’s alumni board.

“I think Vanderbilt University is one of the best schools in the country,” she says. “I had a great education in a supportive, win-win environment at Owen. Whatever I can do to help the school, I’ll do it.”