The ties that bind

As the inaugural member of a new corporate partnership program at Owen, Cardinal Health’s relationship with the school has moved beyond year-to-year hiring. 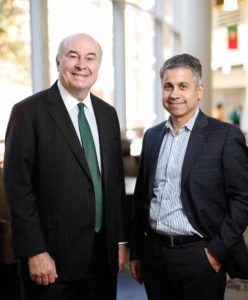 Read McNamara, MA’76, (left)
assistant dean for corporate
partnerships at Owen’s Career
Management Center and Sam
Samad, senior vice president
and treasurer at Cardinal
Health and a member of
Owen’s Board of Visitors

As the inaugural member of a new corporate partnership program at Owen, Cardinal Health’s relationship with the school has moved beyond year-to-year hiring.

Just over a decade ago, when Jeff Greer, BA’94, MBA’00, decided to leave the world of management consulting, he called a contact at Cardinal Health, one of the world’s leading global health services and products companies, to explore new career opportunities. Having worked on past engagements at the Dublin, Ohio-based company, he’d come to appreciate Cardinal Health’s rare combination of maintaining a collegial, collaborative feel within the setting of a company consistently ranked in the top 25 of the Fortune 500.

“One of the things I’ve loved about Cardinal Health is that it reminds me of the atmosphere at Owen,” says Greer, who is now vice president of enterprise architecture and IT strategy at Cardinal Health, and believes he was the first alumnus from Vanderbilt’s MBA program to land at the company. He has been a member of the Owen recruiting team ever since. “In business school, I never felt like there was cutthroat competition among classmates, nor were there barriers to getting access to the people or resources you needed,” he says. “I find that things are very much the same at Cardinal Health.”

Greer isn’t the only one who has recognized the similarities between Cardinal Health and Vanderbilt’s Owen School. This fall, Cardinal Health became the inaugural member of a new corporate partnership program at Owen designed to deepen ties between the school and companies that recruit Vanderbilt business talent. “This partnership formalizes a lot of what we were already doing with Owen, but takes it to the next level,” says Sam Samad, senior vice president, and treasurer at Cardinal Health and a member of Owen’s Board of Visitors. “It puts the things we’re doing together in a bit more of a strategic context.”

Read McNamara, MA’76, assistant dean for corporate partnerships at Owen’s Career Management Center, says Cardinal Health is an ideal company to help launch the new initiative—a program he hopes to grow to about 25 companies. The genesis for the idea came in 2013 around the time M. Eric Johnson was named dean of the business school. “I’d begun to network with my peers at other top-25 business schools and learned about engagement programs they had with corporate recruiters,” McNamara says, citing Harvard Business School’s longstanding partnership with P&G as an example. “There are many different routes a program like this could take, but Dean Johnson and I decided that developing qualitative engagements—things like mentoring opportunities with executives, speaker opportunities, case competitions, joint research projects— would be the cornerstone of our partnership program.”

The primary goal is to attract companies to campus in a way that goes “above and beyond” the cyclical, transactional nature of simply recruiting graduates, McNamara says. That’s a trajectory Cardinal Health has followed since the company began recruiting Owen graduates on campus in 2011, Samad says, noting that the lone Vanderbilt graduate who went to Cardinal Health that year, Eric Messinger, MBA’12, continues to thrive at the company. In the years since then, Cardinal Health has extended its ties to Vanderbilt in numerous ways that go beyond hiring—though that role is growing too as the company has augmented its internship program and broadened its MBA recruiting pool from strictly finance majors to graduates concentrating in areas like strategy and marketing. 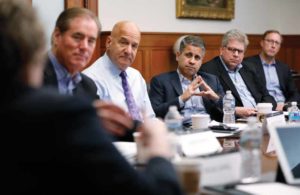 Samad participates in his first Owen Board of Visitors meeting with Dean Eric Johnson in November.

Some of those nonrecruiting activities included former Cardinal Health CFO Jeff Henderson joining the Board of Visitors (Samad has taken over his place on the BOV); Cardinal Health CEO George Barrett delivering a keynote address in 2014 for the student-run Vanderbilt Health Care Conference; and Cardinal Health partnering with Vanderbilt’s Executive Development Institute to develop courses for high-potential executives within the company. “The foundational element in all of this is that you need people who enjoy working with each other,” Samad says. “Once we started working with the team at Owen, we realized we had a very strong cultural fit. We saw that from day one.”

A Good Deal for Both Sides

The partnership between Owen and Cardinal Health is not just about mutual admiration, however. Like any good business deal, both sides stand to gain. One big advantage for Cardinal Health’s involvement with Owen is that it helps sell the students on the company. That’s important, Samad says, because in the next year alone he hopes to double the number of interns from Owen, as well as the number of graduates coming into full-time roles at Cardinal Health. 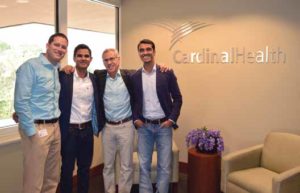 One other critical benefit: diversity. “Cultivating a diverse and inclusive work environment is crucial to our success,” says Samad. “In our efforts to ensure diversity in the workplace, Cardinal Health strives for a workplace that accurately reflects the communities where we live and do business. As I look at the list of Vanderbilt MBAs that we’ve hired, there is a lot of gender and ethnic diversity, which helps us thrive as an organization.”

Internally, Cardinal Health has been exploring ways to put more structure around its internal leadership development efforts to foster a pipeline of homegrown executive talent, and MBA recruiting plays an important role in that. “If we attract somebody into finance, if we attract somebody into strategy, we want them to have the expectation that they’ll be rotating,” Samad says. “They need to understand that they’re not coming into a strategy firm. At the end of the day, they’re joining a health care company.” The other key area for Cardinal Health is tapping into Owen’s teaching and research. Samad says the company wants to continue to develop customized learning programs for the company’s internal use, as well as access to cutting-edge research around the health care industry, especially now that Cardinal Health has operations in Nashville that include a distribution center and a recently acquired health care services company, naviHealth.

For Owen, having high-quality companies on campus regularly recruiting graduates is a key motivator for entering these kinds of partnerships, McNamara says. Developing a stable group of top companies with which Owen has formalized partnerships helps recruit students for admissions, and ideally helps guard against severe hiring dips during economic downturns.

These partnerships also create opportunities for students and companies to get a much better feel for working together before either side commits to a full-time job. McNamara says case competitions offer a good example. “They are perhaps one of the most productive forms of the kind of qualitative engagement we have in mind,” he says. “Over a two-day period, the company—which ideally provides the judges for the competition—will get a really good look at our talent.” Even watching how the students organize, market, and run the competitions offers employers valuable insight, McNamara says. Similarly, case competitions let students get a good feel for a company’s culture and values in a way that an hour-long interview in a library conference room can’t replicate. McNamara says Deloitte’s annual Human Capital Case Competition, hosted at Owen, has been a great success for students in the Human and Organizational Performance track. He’d like to see those efforts replicated with other companies in different management concentrations, such as finance, health care, marketing, and operations. One other key outcome Vanderbilt hopes to see emerge from the corporate partnership program is the creation of an executive-in-residence position. McNamara and Melinda Allen, executive director of the Owen School’s Leadership Development Program, are putting the final touches on that initiative. 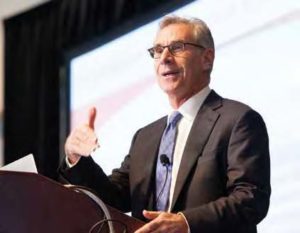 “This would involve a senior executive from a corporate partner spending anywhere between 48 and 72 hours here on-campus meeting with small groups of students, faculty, and administrators,” McNamara says. “That would give the company a terrific look—at a very senior level—at the range of talent and research Vanderbilt has to offer.” For students, it would also help reinforce the school’s close-knit, collaborative culture.

McNamara says each organization that becomes a corporate partner should include a few common components, such as a history of recruiting Owen students in good times and bad; a willingness to hire international graduates; a leadership development program at their organization; and a willingness to engage with Owen through things like speaker series or case competitions. In exchange, companies designated as corporate partners will receive preferential timing for on-campus interview and information sessions; priority for event sponsorship; and invitations to participate in an annual dean’s dinner for corporate partners that will offer an inside look at Owen’s plans and priorities.

“Companies like Cardinal Health—and many others Owen has had fantastic relationships with over the years—have expressed a real desire to be involved with the school, whether it’s related to curriculum, hiring students, or working with faculty on teaching and research projects. Usually, it’s all of those things and more,” Johnson says. “Read and the executives he is talking to for this corporate partnership program have done a wonderful job putting a structure and strategy around a set of mutually beneficial engagement activities. I look forward to seeing this grow into a meaningful, productive program that leads to long-term Samad participates in his first Owen Board of Visitors meeting with Dean Eric Johnson in November. success for everyone involved.