Skip to main content link
Home
From the Service to School: Veterans and the MBA Transition
Apply
News & Events

From the Service to School: Veterans and the MBA Transition 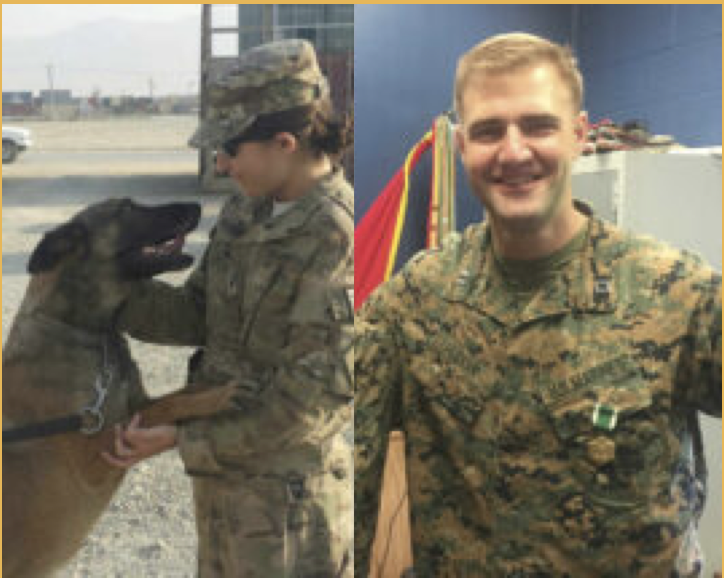 Not all veterans start business school the same day they leave the military — some use military contract positions as a stepping stone. After serving as a Cryptologic Linguist in the Air Force for six years, Chris Salas (MBA’18) became a Senior Arabic linguist for several contractors around D.C. While he enjoyed putting his foreign languages skills to use, after almost 15 years of studying or working in Arabic, he was ready for a change.

“(I asked myself) ‘What would give me the ability to make myself more marketable?’ And business school just really stood out as the prime option for me,” he said.

Many veterans enroll at Owen to gain those marketable skills, even if they already have civilian work experience. After spending four-and-a-half years in the Navy (which included a round-the-world tour), Spencer Betts (MBA’19) found a job at an online lending startup, where he worked for about three years. 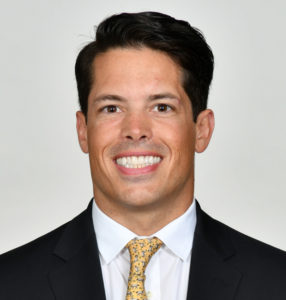 Betts started applying to business schools just as the startup began to take off. Friends and family wondered if he should stay with the company. Betts reasoned that it might take him 5 to 10 years to gain the necessary general business knowledge if he kept working full-time, or he could learn it all in two concentrated years at business school.

Most veterans leave the military in their early or mid 30s, adding to the appeal of business school’s accelerated timeline. “You can get to the same place (either way)…I’d rather frontload it,” he said. “I’ll be starting a career when I’m 35. That’s a little different.” 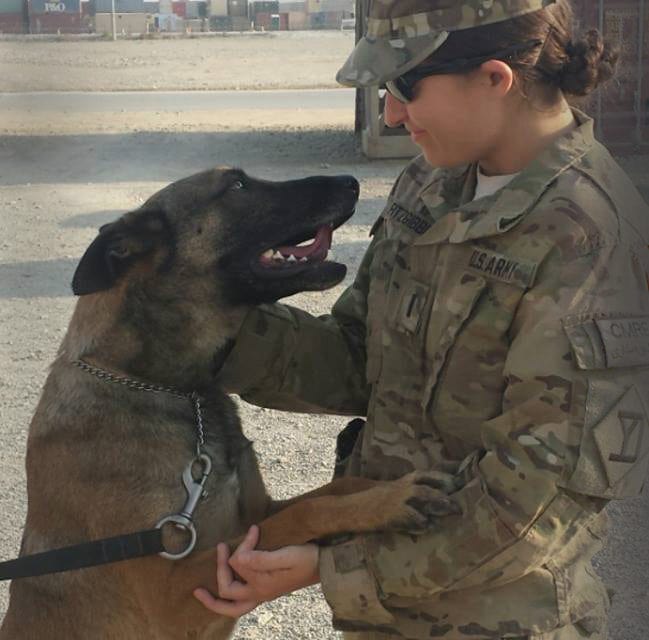 Fitzgibbons plays with a military service dog during her Afghanistan deployment

Stacey Fitzgibbons, a mechanical engineer at Harvard and a National Guard member (a commitment that included an 11-month deployment in Afghanistan), describes business school as a “crash course” in life after the military.

“You’re introduced to so many different people that you get the experience it would probably take years to get otherwise if you just went into the civilian world,” she said.

Admissions staff are highly involved in the process for every Owen applicant. Military veterans require special considerations, especially if they’re training or deployed during the application process.

Fitzgibbons had to go off the grid for an entire month — no internet or cell phone access — for military training while she waited to hear back on her business school applications. She notified each school about her absence, and received form replies from every school, except one.

“Then I got (an email) from Vanderbilt, and it was like ‘Stacey, that is so awesome. We support you entirely. Congratulations on this opportunity,’ and (the admissions staff) signed it with their names,” she recalled. “I was like, ‘That school! Forget everyone else!’”

Christie St. John, Director of Admissions for the MBA Program, acts as the point person for veteran applicants. She works with the Armed Forces club to pair interested applicants with current veteran students who can answer the prospective’s questions directly.

“Christie called me personally to tell me I was accepted into Owen. Little gestures like that really made a big impact on me,” said Jon Cobb (MBA’18), President of the Armed Forces club. “She is one of the reasons why Owen is such a veteran-friendly community.”

That level of support makes Owen a frequent top pick for prospective military students — and even if it’s not their first choice from the beginning, the personal touch can change their minds.

“I was looking at other schools to see if any of them could top Vanderbilt, but none of them did. As soon as I got into Vanderbilt, I immediately accepted,” said Jeff Lenar (MBA’19), who came directly to Owen after seven years in the Marines. “You could have given me acceptance letters to any number of top MBA programs, and I still would have picked Owen.” 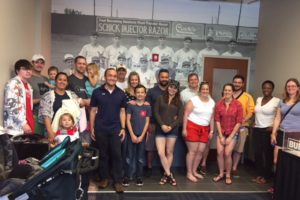 Once veterans are enrolled at Owen, the Armed Forces club works with them to ensure the transition to business school goes smoothly. The club offers recruiting support alongside the Career Management Center, such as military-specific resume reviews. They also host social and volunteer events for student veterans throughout the school year.

“I was moved by how many people helped me, and I wanted to give back (by leading the Armed Forces club),” Cobb said. “We’re in a position to help veterans find out what they want to do with their lives and to help them succeed. That’s something I’m really excited about.”

Beyond official social events, veterans recommend connecting with each other informally, since they can draw upon a shared background that civilian students don’t have.

While getting an MBA is the right choice for many veterans, the transition to business school world can be tough. The first step is coming to terms with the academic workload, as many veterans have been out of school for years. 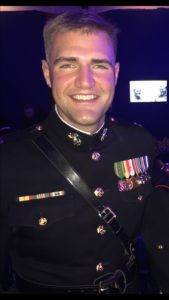 “I was working crazy hours doing something that I knew very well (in the Marines), and now I’m working crazy hours doing something that I don’t know very well,” Lenar said. “There’s this preconceived notion that they’re going to get out of the military and it’s going to be relaxing…(The work) is very quantitative and academic heavy, and (prospective students) really need to be aware of that.”

Veterans do value the competitive nature of business school, and appreciate that their peers are pushing themselves to excel academically.

“That’s what I like about people at business school: They will persevere, they will keep going through…instead of (saying) ‘Oh, this isn’t my subject,’” Betts said.

However, veterans can also have a different perspective on classwork, because they’re used to working under such extreme stress. While this calm demeanor can help them perform well under stress, it can also make it difficult to relate to non-military students at times.

“Business school has to be such a bubble. It’s such a great learning opportunity, but…it’s kind of hard to see people get so worked up over things like grades and finals…no one’s dying,” Fitzgibbons admitted. 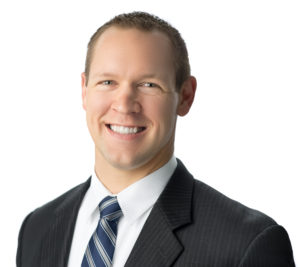 The complications from that perspective extend to the business school environment at large. Many veterans joined the military in order to help others, and some worry that business school is too focused on making a profit or securing the highest salary. However, the veterans at Owen say they can continue helping others and making a difference in their post-military careers, and encourage other veterans to keep an open mind to the possibilities.

“A lot of veterans worry about having a meaningful impact on the world as an MBA, but there are incredible opportunities at Owen to do just that,” Cobb said. “Getting an MBA has helped me meet inspiring people and gain the skills I need to lead positive change on a large scale.”

A lot of veterans worry about having a meaningful impact on the world as an MBA, but there are incredible opportunities at Owen to do just that. -Jon Cobb

Most veterans are, by circumstance, career switchers, using business school as a transition time from the military to the civilian world. Vets at Owen are seeking work in diverse industries, including investment banking, health care, consulting, and engineering.

Some leverage their military experience into internships and full-time jobs. After serving as a Marine, Cobb worked for a security firm that provided diplomatic security for politicians, including former Vice President Joe Biden and Senator John McCain. He used his military background to secure an internship with Deloitte’s federal practice, where he will return full-time after graduation.

“Being able to speak to my skill set in a way that related to the business world was extremely difficult,” Salas said. “I would highly recommend finding a way to quantify the skills that one brings to the table as a veteran in terms that are more familiar to business people.” 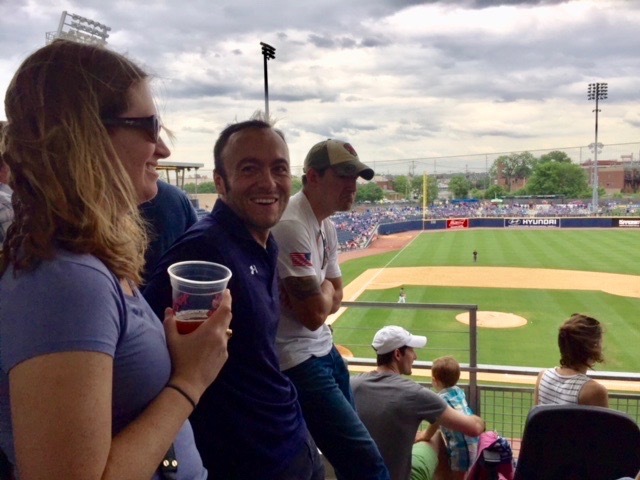 Transitioning to the Civilian World

Once veterans secure internships and jobs, they’re faced with a very different leadership hierarchy than they’re used to. Veterans who once led a platoon of 60 soldiers in a war zone may now find themselves reporting to an executive who has never managed more than five or six people at a time, which can cause friction. Some leaders may be receptive to veterans’ leadership insights, while others may not.

“The military gives you so much experience so young. The majority of the Army is under the age of 30,” Fitzgibbons said. “I think that a lot of people struggle realizing that when you go into the civilian world, you’re going to have more experience than the person you’re working for, even though you’re younger.”

Veterans must also adjust to the lack of structure in the civilian world, which can have both positive and negative impacts. They are used to a highly regimented lifestyle, and adjusting to the more flexible nature of business school can be a challenge. Civilian students may show up late to group meetings, or propose unorthodox ways to tackle assignments, neither of which is encouraged in military environments.

“Veterans are taught to do things a certain way, and that’s how they do it for however many years they are enlisted. A lot of those habits are ingrained,” Salas said. “I had to manage my expectations (upon coming to business school), and that was tough.”

On the other hand, many veterans appreciate managing their own time again, as well as the less systematic nature of the business world. Cobb enjoys working more directly with business leaders and executives, which in turn makes it easier to learn from their actions.

“There’s a lot less hierarchy in the business world, which most veterans appreciate,” he said. “Developing personal relationships with professors and business leaders is deeply rewarding.”

Above all, students say that fellow veterans shouldn’t discount their military background, because many of the lessons they learned in the military do apply to civilian life.

“Coming from the military, you’ve already been tried and tested. I wouldn’t overlook that,” Fitzgibbons said. “You already know who you are, you know what matters to you…You don’t have to start from scratch, because all of that experience does transfer over.”