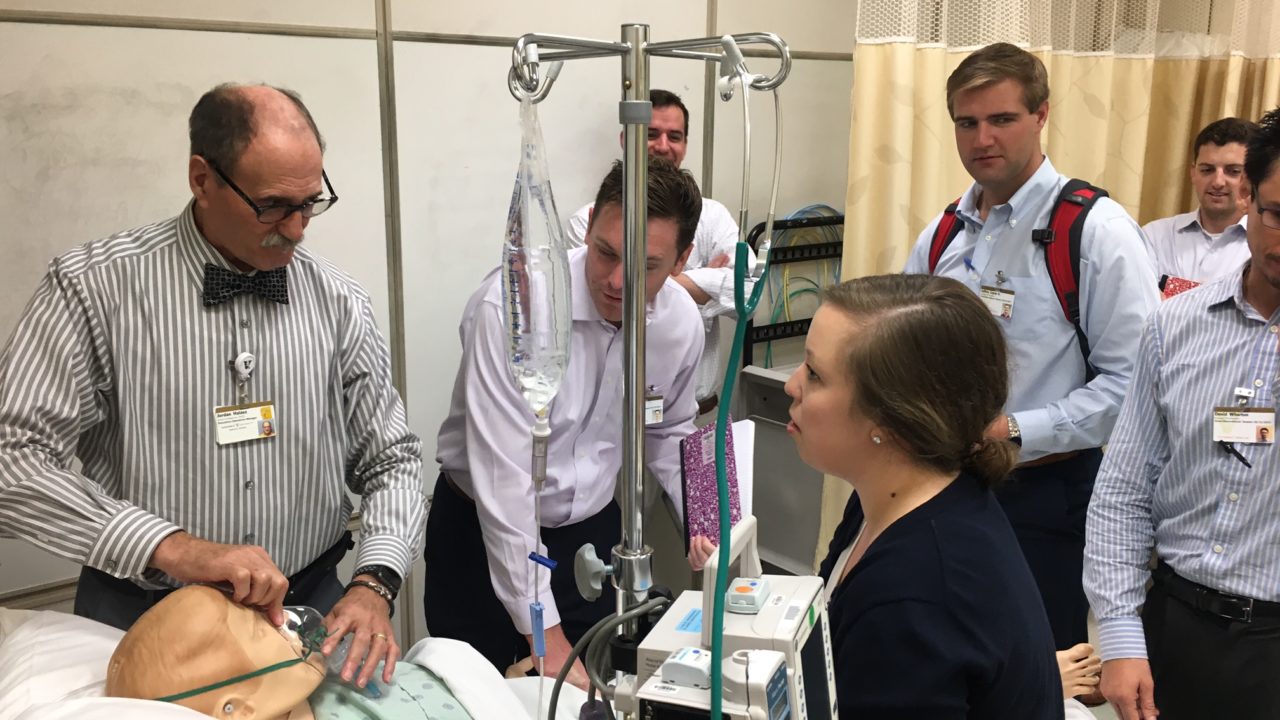 The Simulation Operations Manager shows students around the lab
Students shadowed the operating room, visited a simulation lab, learned from the TN Commissioner of Health, and more

Davis Rand (MBA’19) spent part of his fall break standing in the back of an operating room, watching the surgeon search for an intestinal blockage.

“I was in the room, scrubbed up, and I was staring at this guy’s intestines,” he recalls. “That’s incredible. Not too many people get to go in an operating room and be five feet from someone like that.”

Davis’s operating room shift sounds like training at medical school, but he’s hardly a physician-to-be. In fact, Davis had essentially no experience in health care before participating in Health Care Immersion over fall break.

“With no medical background, all I knew about an emergency room or an operating room environment, I had learned from shows like ‘House.’ And it’s not really like that,” he said.

Health Care Immersion was the highlight of my Vanderbilt experience so far. -Raj Majumder

Health Care Immersion is designed to help the first-year Owen MBAs with a health care concentration build their knowledge of the complex industry. Students get two hours of credit for participating in Immersion, which is a requirement of the concentration and prepares them to take Professor Larry Van Horn’s Mod II class on Health Care Economics and Policy. 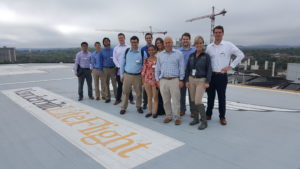 Students pose on the LifeFlight helipad

“Not a lot of times do business (people) go down to the actual caregiving level and sit with them,” said Burch Wood, Director of Health Care Programs. “They get to see that perspective and the nurses get to share their thoughts and opinions.”

Even students with extensive experience in the medical field say they find the shadowing experiences eye-opening. One of these students is Raj Majumder, who worked as a medical researcher at several major hospitals and an adjunct professor of biology before coming to Owen.

“Coming at it from a business standpoint is an entirely different thing. I admit that I was wrong about it,” he said. “I thought (shadowing) was going to be a bit like ‘I’ve seen this already,’ but not even close.”

Getting to Know the Health Care Space

Students also listened to speeches and panels from 31 executives at various health care companies and took a day trip to Franklin to visit some of them in person.

“Larry Van Horn had a parade of fantastic guests come through, from practicing physicians to hospital administrators to CEOs of large provider networks,” Rand recalls.

In particular, students gave rave reviews to Travis Messina (MBA’08) and his company Contessa Health, which seeks to provide hospital-level care in patient’s homes, reducing readmissions and emergency department overflow. Lauren Holroyd, a joint MD-MBA candidate who already has three years of medical school under her belt, says she appreciated getting to hear about non-traditional companies such as Contessa.

“This is not really a concept I had heard of (before), and it affects the way medicine would be practiced in the future from a physician standpoint,” she said. 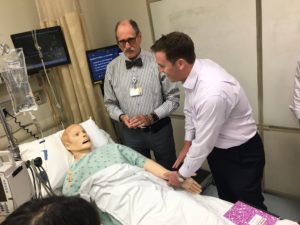 A student learns how to take a patient’s pulse

Other highlights included John Dreyzehner, the Tennessee Commissioner of Health, who spoke about public health’s responsibilities and how they differ from the health care industry’s. Weston Smith, former CFO of HealthSouth, talked about blowing the whistle on his company’s $2.8 billion accounting fraud and the role of modern corporate ethics.

Why Immersion is Worth It

Health Care Immersion may happen during fall break, but it’s no vacation: days routinely last 10 or 11 hours, and students must add a four-hour shift in the emergency department to one day as well. “It was grueling, but it was absolutely worth it,” Rand said.

“I’m not aware of any other place that has a health care program like us that does anything quite like (Health Care Immersion). It’s a unique experience,” Wood said. “It allows (students) to understand whether they’re really interested in health care, and then it gives them good stories.”

Despite the grueling days, for most students, Immersion only confirmed their passion for the health care industry, even as they were confronted with its many complex problems.

“There’s an inherent bias you have when you’re a physician: ‘I want to do every single thing possible for this one individual (patient),’ and that may not make the most financial or business sense,” Holroyd said. “You have to have different, more business-minded tactics to progress forward and make the system as a whole better.”

“Obviously, every bright-eyed MBA student wants to change the status quo (in health care), but you can only say that if you’re very intimately aware of what the status quo is,” Majumder added. “Health Care Immersion was the highlight of my Vanderbilt experience so far, honest to goodness.”