Teams having more experience a prior practice learn new tasks quickly, though their performance lags less-seasoned counterparts immediately after a new practice is implemented, according to new research by Megan Lawrence, assistant professor of Strategic Management at Vanderbilt’s Owen Graduate School of Management.

Lawrence’s findings help reconcile the notion of “competency traps,” in which more experienced practitioners face difficulty learning new tasks, with more positive associations of experience, including a stronger ability to communicate and coordinate. 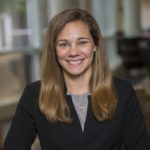 “Together, these findings support the notion that differences in the composition of team member experience…have a meaningful impact on the performance of and improvement in new practice execution.”

The study looked at data from a Fortune 100 retail firm making changes to its store restocking process in 2014. Specifically, the chain consolidated the number of departments supporting the restock, changed key aspects of the system from being driven by individual employee preferences to more collaborative efforts. The retailer also shifted all of the process to take place overnight. All 294 stores implementing the new process did so identically, providing employee teams with training materials, timelines, and practice spaces well in advance of implementation.

Lawrence’s analysis found that, initially, teams of employees having proportionately more experience with the old process generated significantly more errors in the new process than their less experienced counterparts. However, those same teams also reduced their error rates at a much faster clip in subsequent weeks. Learning rates for all team types eventually converged to approximately the same rate.

With firms looking for ways to maintain competitive advantage by implementing sweeping strategic changes in process, policy, and products, Lawrence’s findings underscore the importance of applying a similar level of strategic thinking to an organization’s fundamental practices.

“It may seem like it should be relatively easy to modify practices,” she writes, “but evidence shows that it is actually quite difficult for firms to adjust their practices over time.” Prior experience is not universally good or bad, according to the study. But instituting new practices, even if they are just modifications of old practices, requires thoughtful effort and planning.

Crossing the Line to Communicate Power
Read More >
How Do Psychological Disorders Affect Consumer Behavior, and How Should Marketers Respond?
Read More >
Is Media Hype Behind the NFT Market Growth?
Read More >