MSF Alum Powers Up a Career in Renewable Energy

Ask Master of Science in Finance alum Robert Bray (MSF’15) how he got to where he is today, and he’ll probably use words like “non-traditional” and even “strange” to describe his educational and career paths.

“At first, I didn’t have any idea (my current job) existed when I was at Owen, much less did I think I would have anything do with this certain career path,” he confessed.

Bray works as a product manager at T-REX Group, a company that offers a SaaS (software-as-a-service) platform with financial modeling tools for valuation, risk analysis, and structuring. The platform is specifically tailored to businesses working in the renewable energy sector.

Pursuing a Passion for Renewable Energy 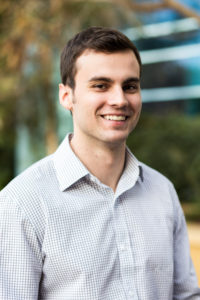 Bray originally started down this career path because of his interest in renewable energy. Ever since high school, he has been passionate about the biggest problems the world is facing. “I saw moving towards cleaner sources of energy as one of those challenges,” he said.

He graduated from Tulane University with a B.S. in economics and began his career at a boutique consulting firm in New Orleans. While there, he worked on a small renewable energy project that involved a lot of financial challenges. The project helped Bray refine his professional ambitions.

“Once I started working on this project, I started realizing that the most interesting challenges — and the challenges that would have the biggest impact — were solving the financial complication around renewables, getting these projects to the point where they’re cheap enough and the economics look good enough that they can really be deployed at scale,” he said.

Bray did have a background in economics, but he decided that he needed more quantitative financial skills to supplement the theoretical knowledge he had gained during undergrad. “I don’t know if I opened up an Excel file until I graduated from college,” he said.

Searching for the Perfect Opportunity

Bray felt that he didn’t have enough work experience to pursue an MBA quite yet, so he began researching Master of Science in Finance programs. He did look at other schools besides Vanderbilt Business, but talking with coaches at the Career Management Center (CMC) narrowed his scope.

“It really came down to the Career Center and the conversations I was having with (Senior Associate Director Blake Gore), which just really put (Owen) miles head of any of the other programs I was even considering,” Bray said.

Even though Bray wasn’t pursuing jobs in investment banking or another traditional finance path, Gore worked with him to lay out a recruiting timeline and identify relevant opportunities. He also encouraged Bray not to accept a job that didn’t align with his interests in renewable energy finance.

“Through my work with Blake, his advice was, ‘while you should be open, you don’t have to settle for something if it’s not what you want to do,’” Bray said. “I had to tell a couple offers that I had that I wasn’t interested just because I wanted to hold on and wait and see what happened.”

Bray’s patience paid off when he found a job opening for T-REX on Vanderbilt’s online job posting portal. The startup billed itself as trying to solve the biggest problems in renewable energy finance, which immediately resonated with him.

“A light went off, because that was exactly what I was trying to get into,” he said. “For this specific role, I never would have found it without Owen.”

I never would have found (this job) without Owen. -Robert Bray

Pivoting Alongside the Startup

Bray interviewed with T-REX and accepted a job offer to become an associate in November 2014. When he interviewed with the company, the job description mostly involved working on investment deals within the renewable energy sector. By the time Bray started his job in May 2015, the company had pivoted to focus on building their financial modeling technology.

Bray’s initial work looked a lot like an associate’s job at a bank, even though his models were being incorporated into a technology platform instead of an investment deal. “For me,” he says, “all the modeling work that I was doing was ultimately going into a product that I was trying to build.”

As time went on, Bray began taking on more strategic work beyond model building, serving as a go-between for customers and the software engineers building the platform. He was promoted to product manager and now flies to Tel Aviv, Israel, every few weeks to consult directly with T-REX’s engineers.

Bray says he still refers back to the financial knowledge he gained at Owen, including modeling, accounting, and more. “My background from the MSF program is relevant, (because) at the end of the day, we’re selling a financial product. A lot of what I do requires financial analysis,” he said. “I’m in an Excel file basically every day…it would have been much more challenging to do that without the foundation that Owen gave (me.)”

Bray encourages fellow MSF students to keep an open mind as they job search and says that even if they’re looking to land in a niche industry like he did, degrees such as the MSF program can help set them on that path. He also advises them to look at the career trajectories of MBA students to see how people with finance backgrounds can end up in different roles.

“I had a type of industry I was trying to get into, and then trying to understand what roles might exist in that industry that are outside of just typical paths,” he said. “It is important to keep an open mind. Even if you want to get into something non-traditional, you can still get there even from routes that might be traditional at first.”