Launching the Venture Brings the Reality of Entrepreneurship to the Classroom

Vanderbilt EMBA and MBA students have long raved about Launching the Venture. Owen entrepreneurs often cite Michael Burcham’s course as the first step in bringing their concept to life. Alumni at corporations large and small talk about the impact it’s had on their careers. To Burcham, Professor and Faculty Director of the Center for Entrepreneurship (C4E), a former HCA Vice President who has started, scaled, and sold multiple businesses over the last three decades, the class offers a valuable experience for any working professional, regardless of their aspirations. 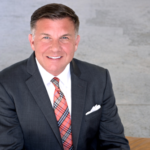 “We want the students to have an experience of what it means to take a concept from idea to being in front of an investor,” he says. “I think framing a concept is an important skill, whether you’re starting a company or working inside a larger company, pitching a new product line, or service area, or market expansion.

“Ultimately, someone has to frame a concept, get research in place, justify their position and defend it in front of a person with the authority to approve or deny.”

That challenge – to build a concept and justify it to an authority – fully manifests itself on the final day of class, when teams present their business plans to a panel of investors, but every session challenges teams to justify their concepts to Burcham and their classmates. Teams build out a different component of the business plan each week and then present it to the class, where they are ranked by their peers and Burcham himself.

For Casey Hill (EMBA’18), whose team concept Uppraisal (a solution designed to improve the real estate appraisal process) finished 2nd in the final presentation round, the design lends itself to the student body. “That’s what you get at Vanderbilt, a lot of very driven people that are very competitive,” he says. “(The peer review) puts real-world pressure on you from the start, and makes you not only critical of your peers, but yourself.” 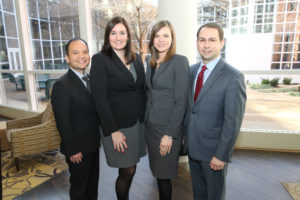 Those teams that score the best and worst each week present are examined in further detail. “It’s a fantastic way for students to learn beyond lecturing,” Burcham explains, “and it’s not critical. It typically lifts all boats, and usually by the following session, everyone has already improved.”

Week 3, or the “pivot point,” as Burcham likes to describe it, is the first significant milestone for a team’s concept. With a market assessment and business model in hand, teams conduct a series of validation interviews with potential customers to determine if their idea has traction in their market. Teams that don’t find interest have to rework their idea and re-validate.

“They get the highs of excitement and the lows of frustration,” Burcham says.

“Really having an understanding in the interview process of who our customers really were, and what the pain points were in those customer segments, gave us a much deeper understanding of what we needed to address,” Hill adds.

With a viable concept in hand, teams spend the final weeks building an operating plan, sales and marketing strategy, and financial plan before presenting to the investors. Students rely on their other coursework to inform their plans, even reaching out to professors for assistance and feedback. “To me, that’s probably the strongest part of the program,” Hill notes, “you have professors that are accessible, not just when you’re in their class. 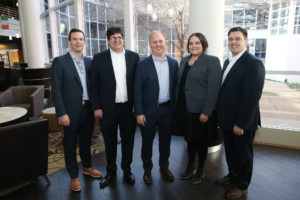 For some teams, the pivot isn’t the most challenging aspect of the course. Nate Hartmann (EMBA’18), whose team venture Brighthorn Health (a new offering in the substance abuse area) took 1st place in the final presentation round, describes the week on operations as a “watershed moment” for his team. “We had this idea, and we had to draw out how this complex process works. That was probably the most intensive work we did,” he says.

Launching the Venture distinguishes itself from traditional entrepreneurial classes in several ways, starting with the man at the front of the classroom. Burcham has enjoyed tremendous success as an entrepreneur. He was instrumental in building the Nashville Entrepreneurship Center. Through his decades of work in Nashville, he has built an extensive network within the investment community. “We provide resources that are hard to find elsewhere,” he says.

Burcham also credits the Music City, which pops up frequently on lists of best places to start a business. “Nashville is a very friendly city, so it’s easy to get appointments and meetings, whether it’s an advisor or potential investor,” he explains.

Finally, the course’s experiential format stands apart. “Most entrepreneurship courses, it’s a lecture story,” Burcham says. “If you think about the assignments and challenges I put students through every week, it’s like a mini-competition every week in preparation for a launch. Adults learn faster by seeing and doing than by listening.”

The combination of Burcham’s design and experience lends an authenticity to the class that students feel prepares them for the real-world challenges of launching a business.

“He gives you a really great taste, even in his interactions in class, of what the questions and presentations are going to be like — what you’re going to run into if you take the money, and how that factors into your management of the company and what the venture capitalist is going to expect of you,” Hill explains. “To have that background makes the process so much easier to stomach once you get to those points.”

Members from both Hartmann and Hill’s teams plan to explore their respective concepts further in the coming months. Both have secured follow-up meetings with investors from the judges’ panel and have discussed the next steps with Burcham.

The second-year EMBA compares the experience to a marathon – an undertaking of incredible effort that, once accomplished, gives you the confidence to run another.

“We took an idea and refined it over and over again, to the point where 12 investors in a room thought it was a viable business model,” Hartmann says. “I never would’ve guessed the amount of effort and refinement it would take to arrive at that point. I have that now, and nobody can take that experience away from me.”