Four Lessons in Leadership from the Former Mayor of Flint, MI

After the City of Flint switched water supply sources from the Detroit water system to the Flint River in April 2014 while under a state-appointed manager, local residents began complaining about the smell, taste, and color of the water, and claimed it caused skin problems. Eventually, health issues emerged, including an outbreak of Legionnaires disease and signs of lead poisoning in children.

During the first months of the crisis, then-mayor Dayne Walling tried to respond to complaints and address the known problems. As the crisis continued, Walling lost his mayoral re-election campaign in November 2015, ending his two terms in office. Eventually, the water was found to contain high levels of bacteria and lead due to insufficient water treatment and corrosion prevention. 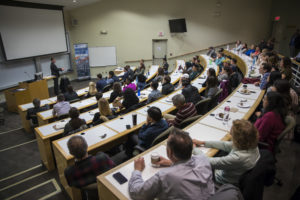 Walling spoke to a packed auditorium at Vanderbilt Business last week as part of the Distinguished Speakers Series (DSS), a student-run initiative that coordinates regular presentations from big-name business leaders. Hosted by Dean Eric Johnson, the talks are open to all students, faculty, and staff at Owen. Past speakers include Donald Kohn, Former Vice Chairman of the U.S. Federal Reserve; Dan Cathy, CEO of Chick-fil-a; and Reese Witherspoon, actress and founder of Draper James.

“While the circumstances in Flint were extreme, I think the lessons from the city are pretty widely applicable. The resilience of our community can be inspirational,” he said.

Here are Walling’s top four leadership lessons from his time as mayor of Flint, MI.

1. All crises are multi-dimensional.

While Flint is most infamously known for its water crisis, a host of other issues led up to (and exacerbated) the situation. By the time Walling was sworn in (August 2009), the city was already in the midst of a financial plight, with a rapidly growing deficit and unemployment nearing 30%. These other emergencies further constrained the city’s resources and contributed to the factors that caused the water crisis.

“In some fashion, every true crisis is really multiple crises that have happened to coalesce into the crisis. It may mostly appear to be an economic crisis, a political crisis, a water crisis, or a PR crisis, but I think every one of these is really a multi-dimensional phenomenon,” he said. “Try, as much as you can, to figure out all those dimensions on the front end.”

Walling said the original plan was to stay on the Detroit water system for several years until the pipes to Lake Huron were finished, but Detroit only gave Flint one year, prompting the switch to the Flint River. Because the switch was intended to be temporary, officials did not properly investigate the Flint River and the pipes for bacteria, corrosion, and other health risks. Compounding the problem, outside experts weren’t called in until the situation had escalated to a true crisis.

“You might find yourself in a business executive position where you don’t have some of these formal check-and-balance kinds of requirements, so you’re going to have to figure out some ways to do that for yourself, your team, and your organization,” he said.

For 18 months, the Michigan Department of Environmental Quality insisted that Flint River water was safe to drink and bathe with, while residents continued to complain and brought bottles of discolored tap water to public meetings. Walling credits the vocal citizens with helping to uncover the problem and says their tenacious protests were one of the first signs that something was wrong.

“If a problem persists, then it means there’s something underlying that hasn’t been diagnosed, that’s not being properly treated,” he said.

Governor Rick Snyder declared a state of emergency and appointed an emergency manager to the City of Flint in December 2011, effectively handicapping Walling’s authority as mayor and significantly limiting the action he could take in office. As a result, Walling had to partly shift his focus to more long-term issues that would last beyond any emergency manager, such as systemic inequality and lack of safety.