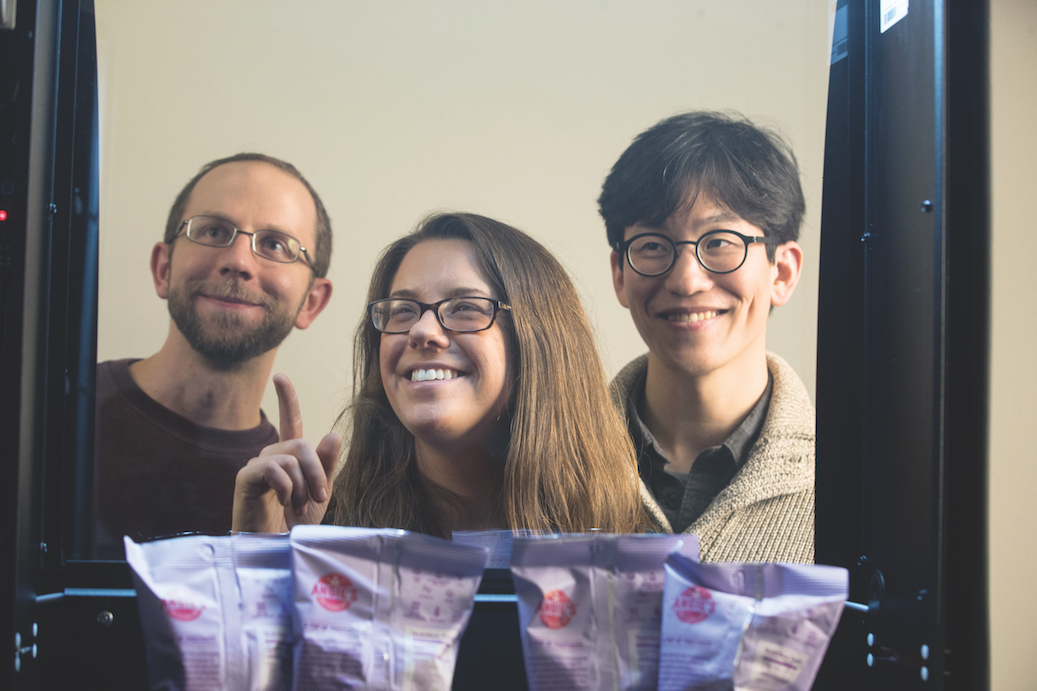 Senior Research Associate Ryan Corser (left), who manages the Behavioral Lab, along with Owen postdoctoral fellows Meredith Whoehler and Brian Park, are helping researchers study consumer snack choices and the broader implications those choices may have. Photo by Joe Howell.

Poke your head into the back office of the Behavioral Lab, and you’ll likely find bags of popcorn, chips and other tasty snacks strewn over the tables. The snacks may look like anything you’d find on the shelves at the grocery store, but they’ve actually been carefully selected by the lab’s researchers based on calories, serving size and other factors.

The snacks are for the lab’s newest addition, a vending machine, which Kelly Haws purchased last year with funds that came with her being named a Chancellor’s Faculty Fellow. The professor of marketing focuses her research on consumer choice and self-control, particularly when it comes to food, so the vending machine purchase made sense.

“We as consumers do find ourselves in front of vending machines, making choices,” she says. “As researchers, we feel like the vending machine is a better choice indicator than hypothetically choosing between two snacks (in an online study). You’re actually getting the product and consuming it.” Next to the vending machine room is a large, open space that fellow researcher Jessica Kennedy uses for her studies on organizational behavior. Kennedy is an assistant professor of management and one of the inaugural recipients of a Brownlee O. Currey Jr. Dean’s Faculty Fellowship, which recognize young assistant professors whose research has a significant impact. Kennedy’s research focuses on power and status hierarchies, ethical behavior and gender, looking at how these dynamics play out in organizations and groups. The new Behavioral Lab space, which was renovated in summer 2016, provides enough room for her to study several groups at a time, significantly reducing the time needed to complete a study.

“As organizational behavior scholars, we’re really interested in how people actually behave in organizations, rather than how they should theoretically behave,” she says. Both Haws and Kennedy also conduct experiments on the lab’s 15 computer terminals. While online studies are easier to administer, they can’t truly replicate real-world dynamics, such as choosing and eating a snack or working together as a group. The Behavioral Lab allows the researchers to more closely mirror those dynamics while still tightly controlling for experimental variables.

“There’s still a demand in the review process for real people, in person, in a controlled environment,” Haws says. “Almost every paper I write needs to have at least one study, if not more, that is conducted in that kind of (lab) environment.” While researchers like Haws and Kennedy design the studies, Senior Research Associate Ryan Corser actually manages the Behavioral Lab on a day-to-day basis. Corser makes sure that experiments run smoothly and monitors participants whenever they are in the lab. He also acts as a liaison with other professors, since the lab mostly draws participants from undergraduate marketing and business courses.
“The purpose of the lab is to try to answer those questions about why we choose the products we do, and if we can predict what you’ll choose based on the setting or the conditions,” he says. Because Corser directly oversees each research session, he must keep his reactions constant so he doesn’t affect participants’ responses, even if they do something unintentionally funny. For example, one study he administered looked at how many cookies people ate when they were given more than they asked for. “One person ordered nine cookies, and he was in the double condition (so he received 18). I think he finished them, too,” he recalls. “It was almost like a challenge for him. He was like, ‘Let’s do this.’”

Having a dedicated research associate like Corser means that researchers get on-demand support for each study. Professors can often start research within days or weeks, instead of having to reserve lab time months in advance as often happens at other schools. To revise a paper, Kennedy needed to run new studies that looked at deception during salary negotiation. Thanks to Corser’s help, she was able to design and implement the new research within the deadline.

“I needed to add some pretty complex data in a short period of time,” she says. “The lab was really open and responsive to getting the new studies done quickly on a timeline that many labs would not have been able to meet.”
While professors at the Behavioral Lab can only measure a few specific variables at a time, they stay focused on the larger implications of their cumulative research. After all, their findings apply to anyone who has ever worked in a team, or decided between a healthy and not-so-healthy snack. “That’s why we study what might seem to be the minutiae of inconsequential individual decisions, because we think responses to these details represent patterns of behavior,” Haws says. “And patterns of behavior are what ultimately lead to better or worse health.”