The first-ever Vanderbilt Entrepreneurship Conference welcomed students, faculty, and alumni from the Vanderbilt entrepreneurial community for a day of learning and networking on November 9. Hosted by the Center for Entrepreneurship at the Owen Graduate School of Management, the conference featured a packed schedule of speakers from both the business and investor sides.

The day kicked off at the Student Life Center with a series of short talks from individual entrepreneurs and investors, including Brian Kasser (BA’90), Partner at Lightspeed Venture Partners; Justin Ishbia (JD’04), Founding Partner of Shore Capital Partners; Sherry Deutschmann, Founder and CEO of Sunset Ventures; and Ryan McGrath (BA’06), President of Asset Plus Companies. The individual speakers were followed by a series of panels on venture capital, campus innovation, design, and startup founders.

“This is a very, very exciting place…Folks in Nashville don’t even realize what they’re sitting on,” Kasser said of the business climate in Nashville. 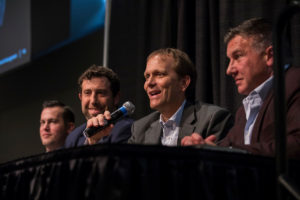 The highlight of the day was the keynote discussion from Ishbia and John Ingram (MBA’86), Chairman of Ingram Industries Inc., who spoke on their efforts to bring Major League Soccer to Nashville. The two originally came up with the idea at a reception Ishbia was hosting to announce the opening of a new Shore Capital Partners office in Nashville. Ishbia mentioned that he was thinking about making an investment in a sports team, and Ingram eventually convinced him Nashville should be the place.

“Luck is the intersection of preparation and opportunity…The lesson is you never really know where some opportunity will show up…This was certainly a case of that,” Ingram said.

Ishbia seconded Ingram’s point, citing the song “The Room Where It Happens” from the musical Hamilton and noting that nothing will happen if you don’t show up to events and meet new people. “My rule is get out there, shake hands, have fun, and follow up,” he said.

The keynote talk was followed by Aaron Dorn (MBA’17), Founder, Chairman, and CEO at Studio Bank, who spoke about launching his second bank after graduating from Owen. (Dorn also helped launch Avenue Bank, which sold to Pinnacle in 2016.) Dorn spoke about the many people who advised and backed the Studio team as they were preparing to start the new bank, and told attendees they would need both experience and connections in order to succeed at starting their own businesses. “I hope I can leave with that message, that social capital is just as important as any other kind,” he said. 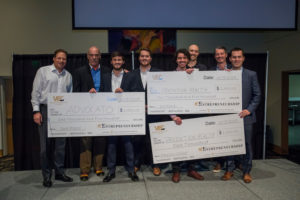 The pitch competition winners show off their celebratory checks

The afternoon featured TED-style talks from individual entrepreneurs as well as a pitch competition for student startups. PredictionHealth, a software that automates documentation and cuts down on paperwork for doctors, took home both first place ($2,500) and the people’s choice ($1,000) awards. Avocato — an online platform that allows users to crowdsource funds, contract with advocacy firms, and monitor their results all in one place — secured the second-place prize of $1,500. The conference concluded with a networking reception at The Wond’ry, Vanderbilt’s center for cross-disciplinary collaboration, innovation, and entrepreneurship.