How I Got the Job: Senior Financial Analyst, Amazon 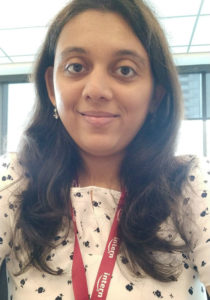 Radhika Karve in the Amazon office

Radhika Karve (MBA ‘19) began her career in her home country of India, starting out in audit before transitioning into tax consulting. Eventually, she decided it was time to make a change both professionally and geographically, and she began looking at MBA programs that could help her make the leap to working in the U.S. in corporate finance.

As she researched schools, Karve was inspired by the story of Rosangela Merchor Santana (MBA’17), an Owen grad who originally came from Peru. Merchor used her time at Owen to start a career in corporate finance at one of Amazon’s U.S. offices. Karve was “very excited” when she read Merchor’s story, and decided to model her career search on it. “She had a similar background to me (as a female international student), she did her internship at Amazon, and now is a full-time employee there,” she said.

Karve successfully secured a summer internship at Amazon in corporate finance, and performed so well the company extended her a full-time offer at the end of the summer. After graduation, she will return to Amazon’s Seattle headquarters as a Senior Financial Analyst in the Finance Leadership Development Program. “(At Amazon), they really care for you and what you’re doing, so that really helped me make that decision fast,” she said.

Click through Karve’s timeline below to find out how she landed the offer.