How I Got the Job: Analyst, Jefferies Group 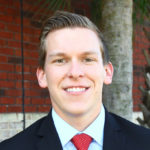 Kevin Hoffman (MSF ’19) began his career in private wealth management at Merrill Lynch after graduating from Coastal Carolina University with a Bachelor’s of Business Administration. As he neared the two-year mark at Merrill Lynch, he decided it was time to take his career in a new direction. Having developed an interest in investment banking, Hoffman tried networking his way into an analyst position, only to discover that few firms considered candidates from non-target universities. In order to successfully transition into investment baking, he decided to return to school.

As he began researching potential programs, Hoffman found himself in a unique position: He had more work experience than the typical MSF student, but less experience than the typical MBA. “MBA is more of final profession degree, whereas MSF gives you a lot more flexibility in terms of what you want to do,” he said. Because he wanted to enter investment banking with his options wide open, Hoffman decided to pursue a Master of Science in Finance degree at Vanderbilt Business.

“Coming (to Vanderbilt) opens up so many doors for you, as far as networking, (and) the coursework you’re exposed to hitting the ground running is just night and day from somewhere like my undergrad,” he said.

Thorough networking and leveraging his prior experience, Hoffman successfully secured a full-time analyst position at Jefferies Investment Bank in New York, and he looks forward to starting work after graduating in May. “Part of the reason why I was so drawn to investment banking to begin with was the people that you get to work with are pretty incredible,” he said.

Click through Hoffman’s timeline below to find out how he landed the offer.