A team of six Vanderbilt Business students took first place in the Venture Capital Investment Competition (VCIC) central regionals, held at the McCombs School of Business at the University of Texas at Austin this year. The team will advance to the global finals competition, which will be held at the Kenan-Flagler Business School at UNC – Chapel Hill on April 12-13.

“We were just excited to compete, so coming away with a victory was a great feeling,” said Michael Splittorf (MBA’19), one of the students on the team.

The Vanderbilt team consisted of Chris Iannacone (MBA’19), Matt Pringle (MBA’19), Luke Sagaser (MBA’19), Michael Splittorf (MBA’19), and Hunter Thornton (JD/MSF’19), with Jon Reene (MBA’20) as their observer. The team advocated for investing in an artificial intelligence startup that monitors driver behavior in vehicles. They argued that the startup was a good choice because of the founder’s experience as well as the market’s future outlook.

“We felt that in addition to a large potential market with multiple pivot and exit opportunities, the founder’s previous startup experience and success gave him a level of credibility that was hard to match,” Sagaser explained. 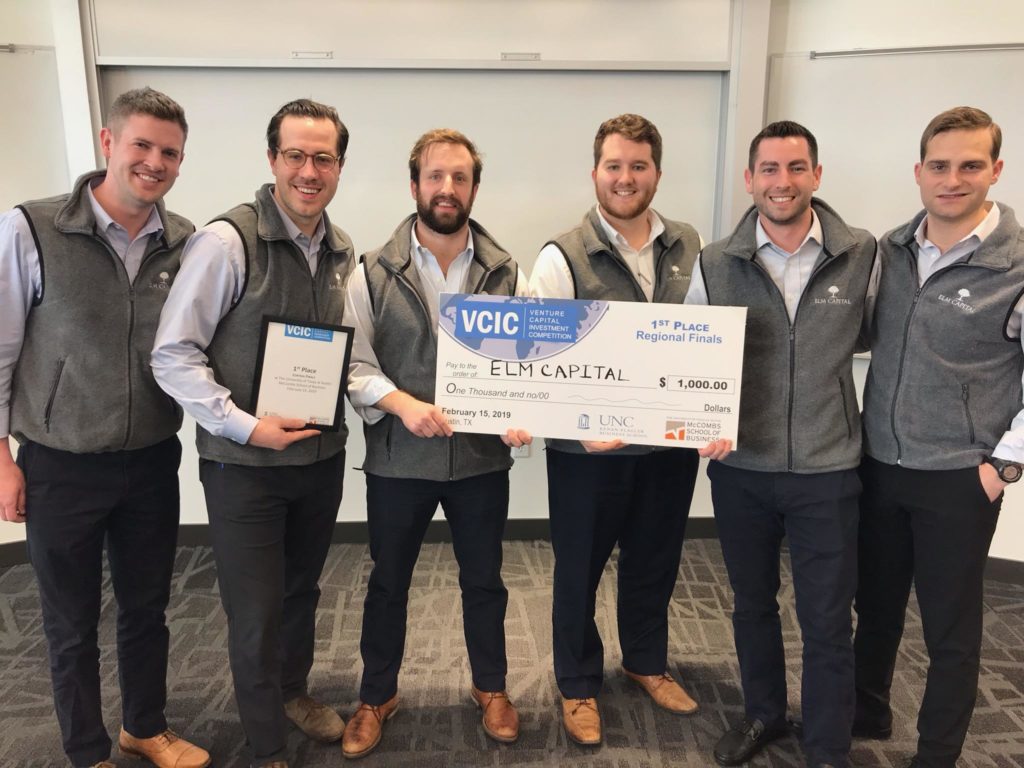 The team won over the judges with their sound logic, securing a spot in the global finals as well as some prize money, which they spent on team vests emblazoned with their VC firm name, Elm Capital (see photo above).

A total of 72 teams competed in the 12 regional competitions, with the winner of each round moving onto the global finals at UNC. Teams from business schools around the U.S. as well as Canada, Europe, India, and Southeast Asia will compete in the global finals.

“We were able to make some incredible contacts at this event, from other MBA competitors, to the local Austin venture capitalists,” Sagaser said. “We’re looking forward to preparing again for another round of intense due diligence sessions, term sheet creation, and partner meetings.”

“The caliber of talent and the prestige of the judges is exponentially more at the next stage of the competition,” Splittorf added. “It will absolutely bring out our best efforts and allow us to network with truly influential venture capitalists.”

For more information on the Venture Capital Investment Competition, visit the official website.