Intellectual Capital: Bringing Out the Best 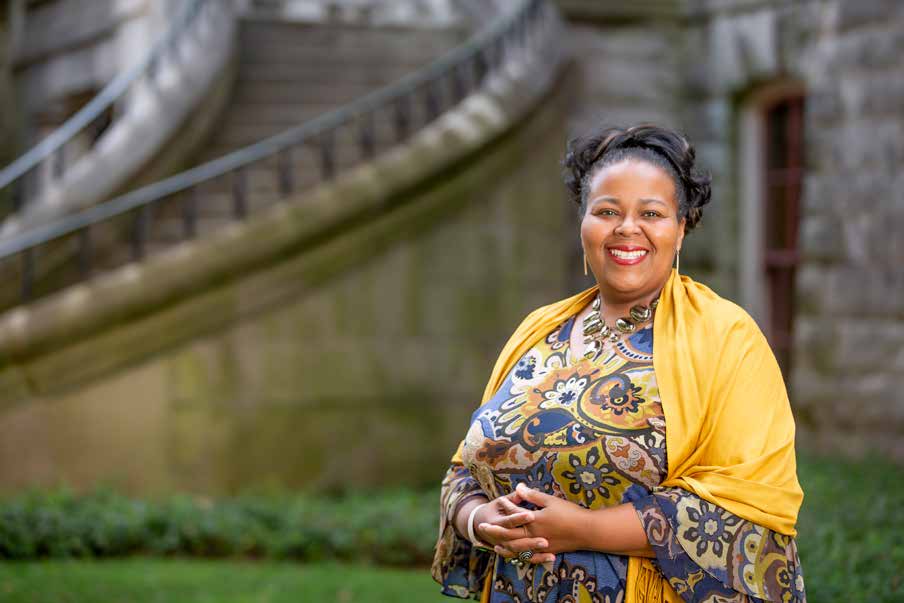 Melissa Thomas-Hunt studies the many dimensions of people’s status—particularly gender, race and ethnicity—to see how they affect teams and organizations, as well as their ability to achieve success

Who: Melissa Thomas-Hunt, a professor of management and the vice provost for inclusive excellence at Vanderbilt University, joined Vanderbilt in July 2017. She earned a bachelor of science in chemical engineering from Princeton and a master of science and Ph.D. in organization behavior from Northwestern University. Her long and distinguished teaching career includes professorships at Washington University’s Olin School of Business, Cornell University’s Johnson School of Management, the Stanford Graduate School of Business and, most recently, UVa’s Darden School of Business, where she also served as senior associate dean and global chief diversity officer. The vice provost began her career after Princeton working for IBM, and her experiences there began to shape what would become her academic interests. “Pretty quickly into my career, I discovered that I was really interested in teams,” she explains. As a marketing representative working on a large account, Thomas-Hunt navigated team dynamics at IBM and on the client side. She found herself captivated by the interplay of people with different roles, responsibilities and goals. “Looking at status dynamics and power dynamics was really fascinating to me, even though I wouldn’t have been able to articulate it like that at the time,” she explains. Another interest—negotiations—drew her to a Ph.D. program at Northwestern University, where she noticed a growing academic interest in the efficacy of teams. Studies to that point had shown that more organizations were using teams to better leverage individuals’
expertise, but the concept was better in theory than in practice. “Teams weren’t actually very good at using the expert information that individuals had,” she says. “In fact, there was this propensity to focus on what we had in common.” Thomas-Hunt noticed an assumption in much of the research that teams were “flat,” which ran counter to her own professional experiences. “In any team, even those in which people had the same nominal title across different functional areas, there was some type of hierarchy,” she explains. She sought to reconcile the inability of teams to utilize individual expertise with this status hierarchy.

What She’s Researching
Thomas-Hunt’s research examines the various dimensions of status to see how they affect teams, organizations, and the ability for organizations to achieve the full use of their talent. Her work across these dimensions—gender, race and ethnicity in particular—pinpoints obstacles to realizing a team’s potential. An early study comparing teams with male and female experts found that male-expert teams performed better on assigned tasks because the men exerted more influence over their groups’ decision-making processes. This
disparity arose from the nature of the tasks themselves; Thomas-Hunt and her co-authors deliberately selected “male-type” assignments, ones historically associated with men instead of women. Male-type tasks, which include those that tend to be more rational and logical, comprise most core organizational tasks, putting female experts at an inherent disadvantage. “When a female contributed information that was different from other members of the team, she was construed as being wrong, whereas when men did that, it was more plausible,” Thomas-Hunt explains. She’s also looked at the dynamics of race and ethnicity and their impact on people’s experiences. In one study, Thomas-Hunt and her co-authors found that individuals gave a lower valuation to firms with African American founders with high-prestige backgrounds than firms with white founders and similar backgrounds. Participants assumed the African American founders received preferential selection into their undergraduate institutions and therefore weren’t as competent. When the researchers eliminated the possibility of preferential selection, African American-founded firms were valued higher. More recently, Thomas-Hunt has been looking into unconscious bias, a well-established research stream with many findings and tests to measure that bias. “There’s this notion that we are all biased,” she says, “which we are. Researchers were excited by this finding because people often reject the notion of being biased … but if everyone’s biased, then [the perception is] they aren’t bad individuals. Researchers believed giving people this information would motivate them to work against these biases.”

For Thomas-Hunt, the truth behind unconscious bias came to her while attending a lecture at Stanford about descriptive norms. “We tend to do what other people are doing,” she puts it simply. “The more we identify with other individuals, the more likely we are to do what they do. And now that we have the promulgation that everyone is biased, we have no motivation to work against it.” In a series of studies, Thomas-Hunt and co-authors were able to elicit more stereotyping behavior by telling participants that the vast majority of people stereotype, versus telling them that very few stereotype. “In some instances they stereotyped more than if they’d been given no information at all,” she says. “Unconscious bias is real, and the vast majority of us have it, but promulgating that fact isn’t the panacea people were hoping for.” So how can a well-intentioned individual mitigate unconscious bias? “They would have to devote themselves to it on a 24/7 basis,” she says. “And we all have a lot of other things we need to be doing.” At an organizational level, however, she believes instilling fully articulated processes will help teams and individuals make the decisions they really want to make despite these unconscious biases. For Thomas-Hunt, her role as vice provost is “where my scholarly work meets my applied work,” she says, as she leads the development and implementation of a vision for equity, diversity and inclusion across academic affairs. She collaborates with the provost’s direct reports and key stakeholders, especially the university’s deans, to advance priorities that directly impact academic, faculty and student affairs. “In this role I end up being a bridge and communicating processes that are in place but have been lost sight of,” she explains. She’s worked on revamping and rolling out faculty search training processes and creating healthy cultures and climates in which people feel valued and contribute their expertise. “Collaborating with colleagues is really about understanding differentially what people care about and how to frame what we’re trying to achieve in a way that people can see how it adds value to what it’s doing.”