While gender parity in the workplace has yet to be achieved, great strides have been made in the past decade alone, with women accounting for 28% of chief executive positions in 2018. That number will only grow in the next couple of years as more women step up to lead and start successful businesses. Here at Owen, the Women’s Business Association (WBA) prepares women to become future leaders in their organizations through professional development, community building, and open discourse equipping students for the challenges they will face.

What sets Vanderbilt’s WBA apart is its inclusivity: All female-identifying students are automatically members and there are no dues or fees. “We try and create an empowering and inclusive community for all the women at Owen,” said Cally Biagini (MBA‘19), outgoing president of WBA.

WBA takes inclusion one step further by including men in the conversation through the organization’s Men as Allies arm. “Our mission is to help educate the men and other people of Owen where men fit into that part as allies or partners in the gender equity spectrum,” said Jim Henshaw (MBA‘19), outgoing director of Men as Allies.

Learning by Leaning in 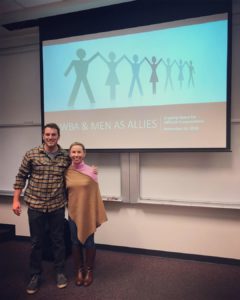 WBA is not afraid to ask hard questions. The group has tackled issues ranging from feminism to intersectionality at their signature Lean-In events, which seek to foster open conversation around difficult subjects. Lean-Ins usually begin with a presentation on research on the topic at hand before breaking attendees into smaller groups to continue the conversation. At the end, each group shares their main takeaways in order to leave the Lean-In with a more comprehensive understanding of the issue.

The first Lean-In hosted by the 2018-2019 executive board centered on feminism and opened up the discussion to diverse perspectives. “The point of it was to bring people who normally didn’t show up at WBA events and maybe it’s because they don’t really identify as being a feminist,” Biagini said. “That was our first way to say, no matter what you think about the feminist spectrum, you’re still a woman in business and that’s really the point of this club.”

While conversations may become heated at times, all participants leave with fresh perspectives and, ultimately, respect for their classmates. Chase Wilson (MBA’19) attributes the willingness to tackle controversial topics to Owen’s close-knit community. “It’s a smaller school, so I always try and think of it in a way that…we’re all Owen classmates, and peers first and foremost… I think there’s a shared level of respect and appreciation for your peers for just coming in to the room and deciding to have the conversation.”

For Laura Maguire (MBA’20), incoming president of WBA, trust is the key to discussing hard topics in an open, honest way. “Trust is such a big thing, too, because if we only thought about the fear of messing up or the fear of hurting somebody’s feelings, then we would never be able to have the conversation,” she said. 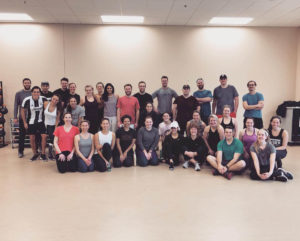 WBA often brings in female leaders from Nashville’s business community, such as Jenneen Kaufman, CFO of the Tennessee Titans, for Lunch-and-Learns. Kaufman shared the unique issues she faces as a woman in an extremely male-dominated industry, including being mistaken for someone’s spouse at NFL events. “Whether you agreed with some of the things she said or not, it made you think about what you would do in a similar situation and how you would react,” Biagini said.

WBA also seeks to grow its community by attracting more top female applicants to Owen. In tandem with the admissions committee, WBA has launched a new initiative to reach out to prospective women prior to their visits in order to establish a more informal relationship and provide candid answers to questions concerning life at Owen.

During Discover Weekend for prospective applicants, the organization also hosts a Women in Business Symposium to expose future female leaders to the challenges and opportunities of a business career. “It was really fun to see the prospective students getting engaged with the alums and it’s a nice networking event, not just for the prospectives but for the current students,” said Radhika Karve (MBA‘19).

In addition to addressing more serious issues surrounding women in business, WBA and Men as Allies engage in enjoyable, stress-relieving activities that build community, such as Kettlebells and Brunch. Kate Moore, owner of getFIT615, a local fitness studio, led a group workout and discussed her work in body positivity and female empowerment before members headed off to a delicious brunch at the Ainsworth, a popular sports bar. “We definitely cover a lot of serious issues, but we also make time just to have fun with one another and get to know people a little bit better,” Wilson said. 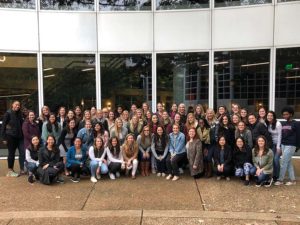 The women of Owen’s WBA club

WBA and Men as Allies hope to reach beyond just Owen in the coming years. The organizations want to support alumni as they branch out into full-time positions and develop programming that will allow alumni to share their real-world experiences with students. Additionally, the WBA also hopes to act as a resource for younger students. Several WBA members serve as mentors for Vanderbilt’s undergraduate Women in Business (WIB) organization, and they hope to increase partnerships with the undergraduate community.

As incoming president, Maguire also hopes to expand WBA’s model of openness and inclusivity beyond Owen. “I feel like we are best in class in how we are approaching this subject and I want to be able to expand that reach to other business schools,” Maguire said. “I want them to see what we’re doing here and come to us… because I know there are organizations like this at other schools, but I feel like we’re really tackling it in a great way.”