Pride in Business: Out & Allied Club Empowers the LGBTQ+ Community at Owen

While the South may not be the first place that comes to mind in terms of LGBTQ+ friendly destinations, Nashville is noted for its burgeoning LGBTQ+ scene, and was listed as one of “6 L.G.B.T.-Friendly Places to Visit” by the New York Times. As Nashville’s premier business school, Owen is proud to welcome highly qualified LGBTQ+ students seeking to make an impact on the business world. 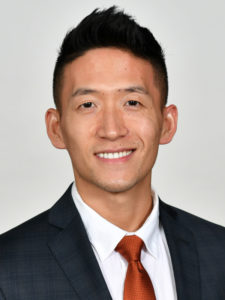 Through scholarship initiatives like the Reaching Out MBA (ROMBA) fellowship, Owen is able to attract top LGBTQ+ candidates like Yang Zhang (MBA’19). When Zhang began looking at MBA programs, he specifically sought out business schools with a supportive LGBTQ+ community. “No matter where you go, you always want to find somewhere there are people that look like you or that make you feel like you fit in,” Zhang said. He quickly became involved with the Out & Allied club, Owen’s LGBTQ+ affinity group, taking on the role of president for the 2018-2019 school year. From drag brunches to lunch-and-learns, Out & Allied provides many opportunities to engage with the LGBTQ+ community at Owen and beyond.

One of the most significant ways through which Out & Allied empowers LGBTQ+ students — who are often underrepresented in business leadership — is by sending members to the annual Reaching Out MBA Conference (ROMBA), which provides opportunities for LGBTQ+ MBA students to connect with recruiters at top companies. At this past year’s conference in Minneapolis, Owen students were able to network with companies like Boston Consulting Group (BCG) and 3M, kickstarting the networking process and even securing some interviews. 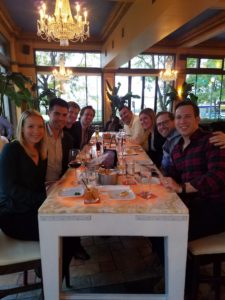 Attendees from Vanderbilt bond over dinner at the 2018 ROMBA Conference

In addition to working with ROMBA, Out & Allied also coordinates career-focused events on campus. This year, the club co-hosted a lunch-and-learn featuring Cynthia Per-Lee, the Corporate Vice President of Human Resources at Microsoft and a happily married lesbian woman. Per-Lee spoke about her experiences overcoming the challenges she faced as an openly gay female leader in the male-dominated tech industry, inspiring students to pursue their business aspirations, no matter the obstacles that stand in their way.

Aside from providing professional development opportunities, Out & Allied seeks to foster LGBTQ+ pride at Owen. The club hosted the first Closing Bell of the academic year, treating students to drinks and a drag performance during the traditional weekly happy hour. “(The drag queen) was really fantastic, the vibe was excellent, and people were loving it,” Zhang said. “We wanted the LGBT Closing Bell to be the first one that is sponsored by a club, so it is kind of a signal to the first-years… that we have a strong presence here and we’re making an effort to get better (at outreach).”

Out & Allied collaborated with OUTLaw, the LGBTQ+ affinity group at Vanderbilt Law School, to host the Closing Bell, and the club often opens its events up to other graduate schools as well as the wider Owen community. In fact, law school students and allies joined the group for Out & Allied’s signature drag brunch at Suzy Wong’s, a trendy Asian-fusion restaurant. “People had a great time,” Zhang said. “What surprised me was a lot of (allies) showed up as well. I really appreciate that.” 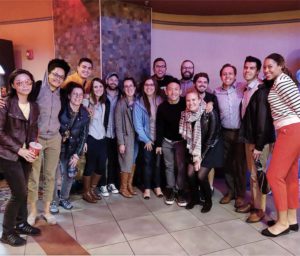 Out & Allied and OutLAW club members at the Boy Erased screening

This year, Out & Allied hosted an advance screening of Boy Erased, starring Nicole Kidman and Russell Crowe. The film chronicles the struggle of a small-town Baptist pastor’s son to embrace his identity as a gay man when he is urged to undergo a conversion therapy program. Through watching the film, members were able to reflect on their own coming out experiences and the challenges facing members of the LGBTQ+ community.

Currently, Out & Allied has around 30 members, some of whom are allies, and one of Zhang’s biggest hopes for the future is growing the LGBTQ+ presence at Owen. “I think the future largely depends on how many LGBT students are going to be here… Building up a recruiting pipeline will be very important,” he explained. Currently, the primary method of recruiting LGBTQ+ candidates is through the MBA Expo at the ROMBA conference. Zhang also works with the admissions office to reach out to high-potential LGBTQ+ students in order to share his experience and answer any questions.

“There are some things you can only relate to people who share the same identity, so having that kind of robust LGBT community put me at ease and also made me feel like this is home, this is where I belong,” Zhang said.