Owen was humming at the beginning of its fourth decade. In 2000, the MBA program welcomed its largest class: 232 students. The faculty numbered almost 70; it now seemed quaint to recall that, in 1969, there had been twice as many professors (12) as students.

Financially, the school was more secure than ever. An indefatigable fund-raiser, Dean Martin Geisel had helped secure more than $29.5 million for Owen as part of a university-wide giving campaign. In addition, the estate of Ralph and Lulu Owen bestowed the largest single gift — $33.5 million — that any business school had ever received.

During Geisel’s tenure, Owen had assembled an internationally renowned faculty, developed a global orientation, brought innovative ideas to life, and cemented its place as an elite school. It looked to build on all these strengths in the looming new century.

But in February of 1999 Owen suffered a tragedy. While giving a presentation at Owen on the school’s recent successes and plans for new growth, Geisel fell ill. When his heart failed three days later, the community was in shock.

His loss was felt personally. At the time of his death, more than half of the school’s roughly 4,000 alumni had attended during his 12-year tenure. Geisel’s strong, supportive presence embodied the camaraderie that was becoming identified with Owen’s brand. He often took students to the old Bluegrass Inn near campus and drank beer with them at San Antonio Taco Company. He attended practices of Owen’s startup (and upstart) rugby team. “Marty was one of the guys,” remembered Peter Veruki, Owen’s Director of Corporate Relations. “He was accessible and there was nothing pompous about him.” 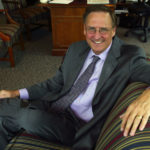 If it was any consolation, Owen at least was positioned to absorb the loss of such a charismatic leader. Under the interim leadership of Joe Blackburn and then Dean Bill Christie, Owen’s reputation and momentum continued to grow. In 2001, The Wall Street Journal ranked Owen 16th in its list of Best Business Schools in the World — and second as a “hidden gem,” a category defined as “lower profile schools whose graduates sparkle.” Business Week ranked Owen’s Executive MBA program 17th globally, and Industry Standard, writing about the “new economy,” counted Owen among the “Ten Business Schools That Get It.” That same year, amid several wins at national or international case competitions, Owen students beat teams from Wharton, Yale, MIT and the London School of Business (among others). The MBA class of 2004 arrived with the highest average GMAT score (648) in school history. 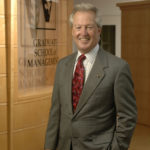 Jim Bradford, who became dean in 2005, ushered in a renewed spirit of innovation and expansion. A CEO in the glass fabrication industry, Bradford possessed more corporate experience than any dean since Ansoff. As an adjunct and then full-time, he had taught global strategy at Owen since 2002. Now, he focused on strategy for the entire school.

In the second half of the decade, Bradford presided over the launch of a succession of market-driven, immersion-based programs. The one-year Master of Finance and Master of Accountancy programs attracted recent college graduates. The Health Care MBA leveraged Owen’s relationship with Vanderbilt’s world-class medical center and Nashville’s burgeoning health care community. Accelerator, a highly successful summer business boot camp, reached a new audience for Owen: undergraduates.

A common thread running through these new programs involved partnerships with the business community, which became more closely engaged with Owen and its students. As part of this strategic outreach, Bradford also established a Board of Visitors, comprised of leading corporate executives, and advisory boards for the health care and accountancy degree programs. 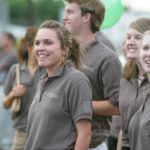 Administrators were far from the only drivers of innovation. Relative to other schools, students had always enjoyed an important shaping voice at Owen. In 2006, they launched Owenbloggers, a site where students wrote frankly about their day-to-day experiences at the school. No other business school had ever given its students such official sanction to create a communication channel with prospective students. But that freedom and trust also became valuable elements of Owen’s distinctive identity.

That same year, students influenced by the work of Muhammad Yunus — a Vanderbilt graduate and Nobel laureate — launched an effort aimed at alleviating global poverty. The Pyramid Project, as it was called, engaged others from across the Vanderbilt campus. As it grew, it influenced not just the way Owen students organized their time but even how they thought about their careers.

Two years later, the Graduate Management Admissions Council named Owen the winner of it Team MBA Award for Community Service. Owen students had long been involved with the wider community. But now, it seemed, social responsibility was becoming a distinguishing hallmark — and a drawing card.