Fifty years ago, Vanderbilt launched its graduate business program with an ambitious, and perhaps unprecedented, goal in mind: To build a world-class management school that would defy hidebound academic tradition. What began as a rock-the-boat experiment, however, ended a decade later with a determined pivot to a more conventional course, narrowly averting the school’s demise.

At first, what became the Owen School wasn’t called Owen. That changed in the first decade. One thing that did endure was calling it a school of management instead of a business school.

Instead of MBAs, the Vanderbilt Graduate School of Management initially awarded a Master of Management degree. The emphasis reflected the philosophy of the school’s first dean, Igor Ansoff, whom The Economist remembers as “one of the world’s most influential management thinkers, past and present.” A time of political and social ferment, Ansoff believed, required managers of change who could help address societal problems as well as business challenges. So the school would produce managers of “purposive organizations,” starting with businesses but encompassing all sectors. “If we couldn’t do something innovative,” recalled one original faculty member, “we might as well fold our tents and go home.”

Perhaps unsurprisingly, the first tiny cohort of students arriving in 1969 for classes at a repurposed funeral home were as likely to have come from the Peace Corps, or from military service in Vietnam, as from business backgrounds. They studied a nontraditional curriculum that focused on organizational behavior, promoted experiential learning, and organized courses into modules of indefinite length.

From the start, the setup was controversial. Faculty split between innovators and traditionalists. The business community, as some university trustees had feared, was confused about the GSM’s program, especially when so many of the students planned to enter fields other than business. Fundraising became a challenge, and then, a crisis.

Ansoff stepped down in 1973, marking the end of the school’s experimental phase. However, replacing him proved difficult—and not just because Vanderbilt sought a particular set of talents. The precarious financial situation made leading the school a riskier proposition than many potential candidates would entertain. (It made expanding the small faculty difficult, too.)

At a meeting in early 1975, Chancellor Alexander Heard warned the Board of Trust that the GSM was in “very grave condition”; Vanderbilt must either close the school or significantly boost its financial support. Sixteen of the 34 trustees voted for closure. By two votes, and the persuasive powers of trustee Madison Wigginton, a 1922 Vanderbilt graduate and tireless champion of the graduate business program, the school survived.

In the role as interim dean that wound up lasting three years, Professor Jim Davis not only kept the school afloat but achieved some enduring gains. He lured Admiral Elmo Zumwalt to the school and, in a coup with lasting implications, persuaded Dewey Daane to leave the Federal Reserve and join the Finance faculty. New trans-institutional degree programs began with Vanderbilt’s Schools of Law and Engineering. 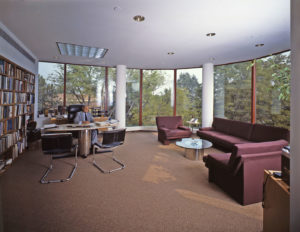 Sam Richmond in his office

The school steamed steadily forward after Sam Richmond arrived as the new dean in September 1976. With 30 years of teaching experience at Columbia, Richmond was steeped in business education, bringing top-level experience and boundless energy to address the GSM’s numerous challenges.

Richmond became freer to address the other priorities when he was liberated from the most pressing one: the school’s financial solvency. In 1977, Ralph “Peck” Owen,’28, and Lulu Hampton Owen made a series of sizeable gifts to the school that now bears their name. The close association with Ralph Owen, president of Equitable Securities, and the one-time chairman of American Express, made other donors feel secure, further helping solidify the institution’s future.

Richmond immediately worked on redesigning the curriculum, modeled on what he had helped shape at Columbia. It was in place within six months. He also focused on recruiting students with more traditional business backgrounds—and greater numbers of them. Within a year, enrollment in the MBA program (there was no longer a Master of Management) had grown to 85 students—a 60 percent increase —and by the end of Owen’s first decade the student population stood at 150. Meanwhile, eight new professors joined the faculty (among them was a newly minted Ph.D. named Bob Whaley, who now is now Valere Blair Potter Professor of Finance and Director of the Vanderbilt Financial Markets Research Center). The new Executive MBA program welcomed its first students in 1978.

The dramatic growth, while stabilizing the school, created challenges of its own. Henry Clay Alexander Hall, as the old mortuary was rechristened, was now too small. Finding a new and bigger home was Richmond’s next priority—and part of the story of Owen’s second decade.