Growing a Global Mindset at the Big 4

The opportunity to live abroad for a short period of time is an exciting prospect for most people: It offers the chance to expand your horizons and develop a global mindset while immersing yourself in a different culture. While many associate this chance with studying abroad during college, graduates of the Vanderbilt Master of Accountancy (MAcc) program are able to pursue these opportunities while working at one of the Big 4 companies.

Big 4 firms offer employees the chance to participate in development programs or rotations at their international offices, usually when the employees reach the manager and senior associate levels. While the work is similar in both the U.S. and international firms, the different lifestyle and unique cultural experience are what draw domestic employees out of the country for anywhere between three months and two years. Below, three MAcc alumni share their stories from their time working at an international Big 4 firm. 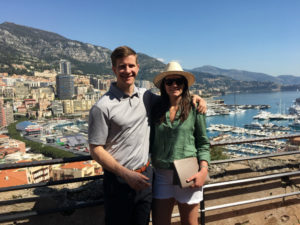 Working at KPMG, Blackburn had the opportunity to work at a London firm for two years. Many major banks have headquarters in London, making the city an ideal choice for Blackburn, whose specialty was U.S. banking. He was able to leverage his experience there because those banks also had U.S. locations, and since KPMG has major operations in London, his transition was smooth.

The London firm was a melting pot for the employees from all over the world, including Malaysia, South Africa, Holland, and Japan. Blackburn had the chance to interact with people with different ethnicities and backgrounds and learn from them. “You have all these different cultures leading to everybody having a different way of working. In Nashville, I was pretty much always working with Americans all the time. So that was beneficial for me — it seems to be a little more worldly,” he said.

Blackburn’s experience abroad was also memorable for personal reasons, including a big event in his family. “There’s other (benefits) like being able to travel, and there’s a lot of stuff outside of work that’s great over there. Also my wife and I had our son over there,” he reminisced. Blackburn was also able to observe the British economy and how Brexit affected it firsthand, which interested him greatly.

Hsu had the opportunity to live in two different countries outside of the U.S. during her time at PwC. She spent two years in Singapore and then another two years in Switzerland. These international firms wanted her specific skills and background. “Foreign firms borrow you from the U.S. firm with the idea that you’re bringing something specific that they couldn’t source locally. It was most likely that I had knowledge of the client,” Hsu said.

While working abroad, what stood out to Hsu the most were the different cultures. For example, in Switzerland, shops and offices closed around 7 p.m. “The idea behind that is that they want people to be spending time at home. (The idea that) people need time with their families and time at home permeates throughout the work culture,” she said. In Asia, she noted that there was much more deference for senior leaders.

In addition, her thought processes became more flexible after working abroad. “I think it’s really common for Americans to expect that everybody conforms to our best practices. But that’s not always the thing that makes the most sense. (This experience) really trained (me) to have more flexibility in (my) mindset and to look for how certain fact patterns may or may not hold true,” she said. 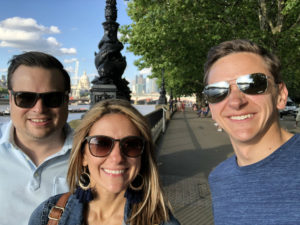 Yates was interested in international opportunities as soon as he entered EY. “The chance to be immersed in a different location, a different country, a different culture, far more than just taking a week or two trip, but really being there and living it for some length of time — that was really interesting to me from the very beginning,” he said.

Yates got his opportunity this year when he was chosen to participate in EY’s Global New Horizons Program. Along with around 30 other people, he was placed in a London firm for three months. During his time there, Yates made sure to maximize his time in a new environment. He and his fellow employees did day trips across England and even attended the Royal Ascot Horse Race. “That was probably the most British thing I did that summer,” he said with a laugh.

Not only did he make fun memories, Yates also got the chance to work on a globally integrated oil and gas client that had operations all around the world. During his time in England, he developed a different kind of understanding of how companies and clients operated. “That was a new experience… for me to do this, to go work for a client like this, and be able to bring that knowledge and experience (and) perspective back to my team here,” he said.

Want to earn a Master of Accountancy?