How I Got the Job: Quality Engineering Specialist, Toyota North America 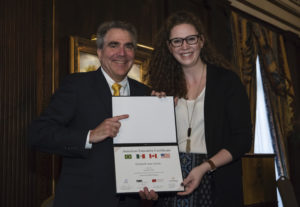 After graduating from the University of Mississippi with a degree in Chemical Engineering, Elizabeth Taylor (EMBA’18) launched her career as a Quality Control Manager at Contract Fabricators, Inc. She eventually transitioned to working at Cooper Tire & Rubber Company, where she began considering internal promotion opportunities.

Taylor turned to business school as a logical next step in her career trajectory. While she considered enrolling in an online program, advice from a family member convinced her to commit to the Vanderbilt Business Executive MBA program.

“What really swayed where I went was (when) he said, ‘Do you want to go to a program where you get a gold star for doing it? Or do you want to actually learn something?’ That kind of solidified Owen for me,” she recalled.

Having never traveled outside of the country, Taylor was particularly drawn to the international travel opportunities offered by the EMBA Global Immersion Track. During her second year of business school, she completed residences in Canada, Brazil, Mexico, and the United States.

“I’ve only ever worked within Mississippi, with people that are American and mostly from Mississippi,” Taylor said. “Going to Owen and especially doing the Global Immersion Track helped me learn how to effectively work with people who are different from me.”

As Taylor progressed through the EMBA program, she realized that a company with greater internal mobility would be a better fit for her long-term career goals. During her second year, she began searching for positions that would leverage both her technical expertise and her business education.

While in Mexico for the third Global Immersion residency, Taylor applied to a role as a Quality Engineering Specialist at Toyota. Toyota ultimately extended her an offer, and she began work just a few short weeks after graduation. “I get to use my engineering background, but I also use a lot of the things that I learned at Owen every day,” Taylor said.

The international business skills Taylor gained through the EMBA Global Immersion Track have proven integral to her role at Toyota. On a recent business trip to a supplier in Mexico, her EMBA residency at Instituto Tecnológico Autónomo de México (ITAM) helped her establish a valuable cultural connection.

“I remember the first time I went to this plant, it was kind of ‘us versus them,’” Taylor explained. “But then you get to know them and talk to them, and I remember telling them that I went to school in ITAM and I have a lot of friends in Mexico City. As soon as I said that, it’s like something switched in their brains like, ‘Okay, she’s one of us and that’s something we can relate to.’”

Click through Taylor’s timeline to find out how she landed the offer.

Want to learn more about the Executive MBA program?