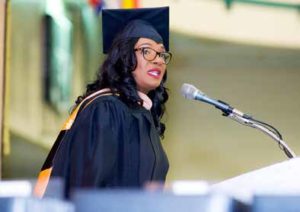 Chancellor Emeritus Nicholas S. Zeppos awarded the Founder’s Medal for the Owen School to Matthew Davis, MBA’19, at the university’s main Commencement ceremony. Owen Commencement speaker Cindy Kent, MBA’99, MDiv’01, Best Buy board member and longtime health care executive, spoke about the keys to living “your best, wild and precious life.” “The truth of the matter is, all of us have something within us that is whispering and wanting more—to be more, to do more,” she said. “Some call it purpose. Others, vocation. I do not care what you call it … just allow it. Amplify it with intentionality, and in so doing, you will live a life that is bigger and better than anything you could have ever imagined.” To bolster Owen’s commitment to diversity and inclusion, Kent recently made an endowed gift that will establish the Cindy (Smith) Kent Legacy Scholarship, with an awarding preference for students who are historically underrepresented in business education and management. She hopes to mentor the scholarship recipients.

The Owen Graduate School of Management celebrated Commencement Day ceremonies for its Class of 2019 on May 10. Gathered in the Vanderbilt Student Recreation Center, 165 students received the MBA degree; 66 received the master of finance (MSF) degree; 32 were awarded the master of accountancy (MAcc) degree; 22 students were awarded the master of marketing (MMark) degree; and 50 students were awarded the executive MBA (EMBA) degree. Students from the Master of Management in Health Care program also participated in the ceremony. M. Eric Johnson, the Ralph Owen Dean and Bruce D. Henderson Professor of Strategy, opened the day’s ceremonies with a celebration of the school year and a call to students to stay involved after graduation. “We can help you throughout your career, and you can help us,” he said. “We crave your ideas, your experience, your energy; they are the very lifeblood of our community.”

The Owen MBA program’s finance concentration has been designated a STEM degree program, allowing international students to extend their postgraduate Optional Practical Training (OPT) in the U.S. by 24 months. “This STEM designation is a direct result of the leadership team here listening to what our students are saying, specifically our international students,” says Sue Oldham, MBA’93, associate dean of MBA programs operations. “Under the leadership of Dean Eric Johnson, we were able to work with our faculty to ensure that this STEM designation in the finance concentration is one that would have an immediate impact, not only for our current students but for all prospective students.” Under the OPT program, international students who graduate from colleges and universities in the United States are eligible to remain in the country and receive training through work experience for up to 12 months. With the STEM designation, international graduates on F-1 visas are eligible to remain in the U.S. for an additional 24 months, giving them a total of three years to work in the U.S. “For the student, the three years of OPT offer a level of security and peace of mind,” Oldham says. “For the hiring companies, attracting and retaining better quality international students is always top of mind from a recruiting standpoint.” 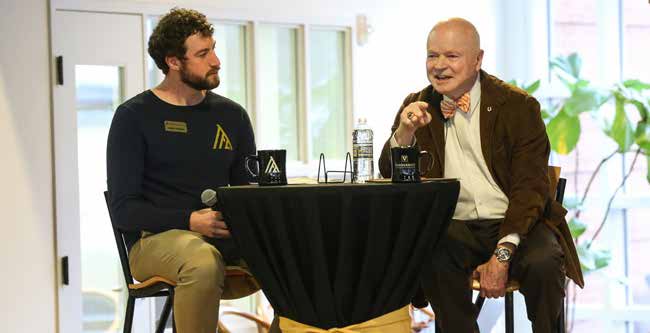 The Cal Turner Family Foundation has announced a gift of $2 million to expand the mission and impact of the Turner Family Center for Social Ventures at Vanderbilt University. In 2015 the foundation established the Turner Family Center as a student-driven, interdisciplinary organization focused on developing entrepreneurial, market-based solutions to alleviate poverty around the world. The center is housed within the Owen School, but serves undergraduates, graduate students and faculty members from multiple schools across Vanderbilt. “The Turner Family Center for Social Ventures brings together talented individuals from every corner of the university seeking creative solutions to help lift people out of poverty around the world,” says Interim Chancellor Susan R. Wente. “Vanderbilt welcomes the Turner family’s continued generous support of the center to help sustain important programs like Project Pyramid—which combines classroom learning with global immersion experiences—and student participation in the internationally renowned Hult Prize.” The new $2 million commitment is aimed at expanding the Turner Family Center’s Social Enterprise Consulting services and fellows program, both of which place graduate students with partner organizations to gain real-world experience in social ventures. Another new area of focus will be identifying and implementing processes to measure social impact. “These Owen students seem to be kids to someone my age,” says Cal Turner Jr., BA’62, chairman of the Cal Turner Family Foundation. “Yet my time with them convinces me that amazing, much needed future leadership for the world is now being formed in their creative lives.” Turner, the former CEO, chairman and president of Dollar General Corp., is committed to community development and theological education and actively supports other programs at Vanderbilt, including the Cal Turner Program for Moral Leadership in the Professions.

The Owen School’s Executive MBA program has awarded its first Reaching Out MBA (ROMBA) fellowship to Greg Geffre, a current executive MBA student and compliance analyst at UBS in Nashville. Owen has an established partnership with ROMBA, a nonprofit whose goal is to educate, inspire and connect the next generation of LGBTQ leaders. The fellowship is available to MBA students who self-identify as LGBTQ. As a partnership school, Owen has awarded ROMBA scholarships for several years, but this is the first time the EMBA program has awarded the fellowship. “Diverse voices in the classroom are critical to the EMBA student experience, and the Executive MBA program is pleased to expand Owen’s partnership with ROMBA, improving our ability to specifically recruit LGBTQ students,” says Sarah Fairbank, director of recruiting for EMBA programs. Originally from Phoenix, Geffre worked most of his career in the financial crimes division of Wells Fargo until about a year ago, when he moved to Nashville to be with his partner. His position with UBS is in the financial intelligence unit. “After the MBA, I’m hoping I’ll be able to start transitioning into more of a senior leader and move into a higher-level decision-making role. An advanced degree is necessary to do that. Stereotypically, [the business world] is pretty conservative. But I think businesses as a whole are now recognizing the benefits of diversity and are really trying to exemplify that they’re a welcoming place.”

Vanderbilt alumna Sue Oldham, MBA’93, has been appointed associate dean of MBA program operations at the Owen School. In this new role she oversees departments across the MBA program: Admissions, Academic Programs and Student Life, Shared Services, Extracurricular Learning, and the Career Management Center (CMC). “Working closely with colleagues in the dean’s office, faculty, staff and student leaders, she will work to enhance the end-to-end student experience from the moment a prospective MBA student becomes interested in Owen until they graduate,” says Owen Dean M. Eric Johnson. Oldham joined Vanderbilt from the Jones Graduate School of Business at Rice University, where she had worked since 2008. Most recently, she had served as the school’s executive director of alumni engagement, external relations, and for eight years as executive director of recruiting and admissions. Before joining the Rice staff, she had a 10-year career in information technology consulting, spanning several companies and cities, including Los Angeles, Dallas and Charlotte, North Carolina. “I’ve watched—with great pride—this program grow over the years,” Oldham said. “I’m most excited about working alongside an amazing team filled with die-hard Owen passion to see how we can transform the prospective-student experience to truly showcase what so many of us know and have experienced as a transformative and lifelong endeavor.” 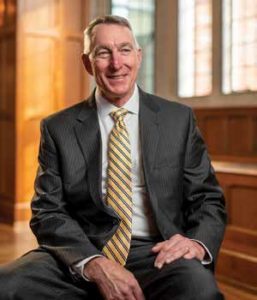 Gary H. Cheek, a retired U.S. Army lieutenant general with extensive experience mentoring and leading teams, has been named director of the Bass Military Scholars Program at Vanderbilt. “Gen. Cheek’s deep understanding of the strengths of our military servicemen and women and his remarkable leadership experience make him the ideal leader for this transformative new program,” Chancellor Nicholas S. Zeppos said at the time of his appointment in January. “Our entire academic community stands to grow and benefit from the perspectives that the Bass Military Scholars will bring, and he will be the perfect mentor to support these students and to recruit future cohorts.”

The new program will support up to 40 scholarships and programming for honorably discharged military veterans pursuing graduate and professional degrees at the Owen School, Vanderbilt Law School, Peabody College of education and human development, the School of Medicine, and the School of Nursing. The program was established in 2018 with a $25 million gift from the Lee and Ramona Bass Foundation to honor the leadership traits and commitment to service embodied by current and former members of the U.S. military. “This program not only will benefit veterans seeking advanced degrees, but also will allow them to impart their character, work ethic and mission focus into the rich and collaborative learning environment that exists at Vanderbilt. It is a classic win–win,” Cheek said. “I am deeply honored to lead this unique and important program, and look forward to working with faculty, students and administrators across the university to make Vanderbilt the premier destination for veterans—both officer and enlisted—seeking graduate and professional degrees.” The first class of Bass Military Scholars will enroll this fall, providing six scholarships for veterans beginning with the 2019–20 academic year. In addition to scholar recruitment, Cheek is responsible for the design and implementation of programming to engage the students in the life of the Vanderbilt community as leaders and mentors. Scholars will meet regularly as a group as they work toward degrees in different schools. They also will participate in a range of campus service activities designed to foster military–civilian exchanges and mentorship opportunities within the broader Vanderbilt community. Cheek’s extensive military career spanned both international and domestic service. Before retiring in 2018, he served as director of the Army staff in Washington, D.C. In this role he integrated and directed strategic-level actions for the Department of the Army and represented the Army in government, public and congressional engagements, and coordinated and resolved sensitive issues and requirements with field commanders, other government officials and the media. 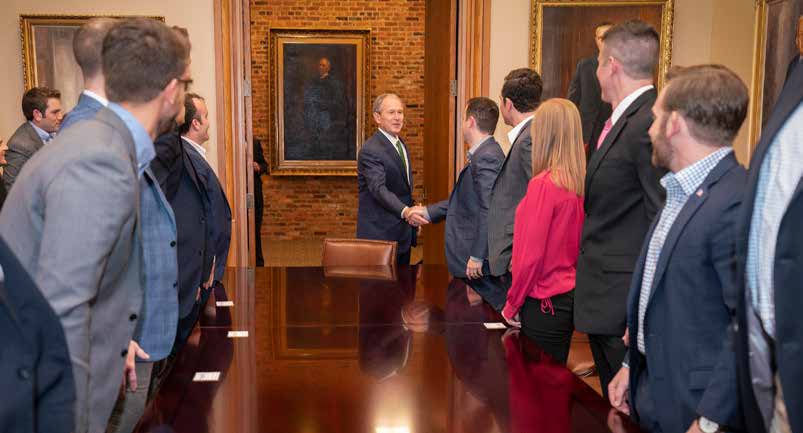 Former President George W. Bush meets with members of the Owen Armed Forces Club, a group of military veterans currently earning their MBA degrees at the Owen School, as part of his visit to Vanderbilt University on March 11. He was on campus as part of the Chancellor’s Lecture Series. 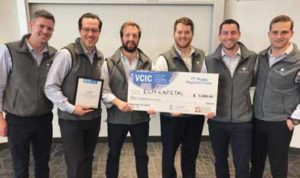 A team of six Vanderbilt Owen School students took first place in February in the Venture Capital Investment Competition (VCIC) central regionals, held at the McCombs School of Business at the University of Texas at Austin. “We were just excited to compete, so coming away with a victory was a great feeling,” said Michael Splittorf, MBA’19, one of the students on the team. The Venture Capital Investment Competition (VCIC) is the world’s largest venture capital competition, with more than 70 universities competing. During the competition, students play the role of venture capitalists who have around $100 million to invest in one of the startups presenting. The student teams assess the investment opportunities and pitch their investment strategy to the competition judges. In addition to Splittorf, the Vanderbilt team consisted of Chris Iannacone, MBA’19; Matt Pringle, MBA’19; Luke Sagaser, MBA’19; and Hunter Thornton, JD/MSF’19, with Jon Reene, MBA’20, as their observer. The team advocated for investing in an artificial intelligence startup that monitors driver behavior in vehicles. After winning the regionals, the Owen team went on to compete in April in the global finals competition, which was held at the Kenan–Flagler Business School at UNC–Chapel Hill. Georgetown’s McDonough School emerged the winner there.