Why Some Rules Are Meant to Be Broken

In every type of business, rules and regulations guide a variety of practices and processes to ensure the business operates safely, fairly, ethically and so on. Virtually all research into why businesses fail to follow these rules has focused on the organizations themselves.

A new study by Vanderbilt professors is one of the first to approach the problem from the other direction.

“What we wanted to know was whether there was something about the rules themselves that makes an organization more or less likely to violate them,” says Rangaraj
Ramanujam, the Richard M. and Betty Ruth Miller Professor of Healthcare Management at the Owen School.

The paper, “The Effects of Rule Complexity on Organizational Noncompliance and Remediation: Evidence from Restaurant Health Inspections,” has just been published in the Journal of Management. Ramanujam’s co-authors are Bruce Cooil, the Dean Samuel B. Richmond and Evelyn R. Richmond Professor of Management at the Owen School, and University of Virginia professor David Lehman. Lehman is the first author. 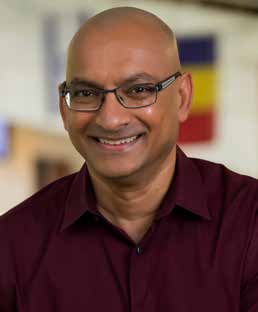 The researchers theorized that complexity could make rules harder to follow. They defined “complexity” in two ways: by the number of components a rule had, or the number of connections it had to other rules. They then hypothesized that rules with both features—many components and many connections—would be especially vulnerable. Furthermore, they proposed that complexity not only would make a rule harder to follow, but it also would make violations harder to fix.

Using an unusually detailed data set that tracked 1,011 restaurant inspections of 289 restaurants in Santa Monica, California, the researchers were able to observe more than 80,000 instances of rule compliance and noncompliance, including repeated violations, during the course of three years.

Perhaps unsurprising, they found that complicated rules were violated more often, and the combination of the two types exacerbated the problem further. “The interaction is super-additive,” Cooil says. “You don’t just add the individual effects of components and connections together. It actually makes things even worse.”

They then looked at the impact of complexity on remediation. The first thing they found was that a rule that had been broken before was more likely to be broken again.

Even more surprising, they found that while the presence of both forms of complexity made a rule much harder to follow, they were not that much harder to remediate. Essentially, the combination had an unexpected braking effect. Those violations were still harder to fix than average, but they weren’t as hard to fix as the researchers expected.
The researchers say their findings suggest that encouraging compliance may require a more holistic look at how organizations engage with the rules they’re given.

“The takeaway here is that the way rules are designed matters, too, and they should be a subject of study in their own right,” Ramanujam says.