Most MBAs use the summer between their first and second years to intern at a company in the hopes of earning a full-time offer — but not every student wants a traditional corporate job. For MBAs interested in a more entrepreneurial path, Vanderbilt Business offers the chance to compete for the Summer Grants. Each year, up to three first-year MBA student entrepreneurs are awarded $15,000 to launch their business during the summer instead of taking an internship.

This year, one student received the grant: Teddy Dinker (MBA’20). We caught up with Dinker to learn more about his entrepreneurial background, his initial startup idea, and how the grant helped him further develop his company. 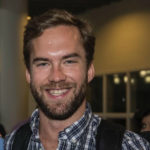 Dinker was set on being an entrepreneur even before he entered the MBA program. Working summers in his dad’s company — which personalized financial card products for banks and credit unions — helped him learn the ins and outs of running a business. “I feel like once you kind of get a taste of (entrepreneurship), it’s hard to do anything else. I like the idea of… building a culture, building an identity. I think I have a much easier time doing that than I do fitting into something else or coming to work in a cubicle from nine to five,” he said.

After working in sales for a bit, Dinker decided to go back to school to develop a deeper understanding of the technical parts of a business, such as finance and operations, for his entrepreneurial career. During his first year of the MBA program, he gained a lot of knowledge from not only his classes but also discussions with professors like Jon Lehman and chats with alumni. “If you want to get mentorship, if you want to find experts on what you’re trying to do, you can get them here or through the alumni network,” Dinker said. “I feel like I’ve gotten more out of the (Vanderbilt Business) experience than what I paid so it’s always good.”

Dinker’s idea for his grant proposal started with his friend, who managed several vacation rentals in Nashville. The concept, called Hostmost, is like a TripAdvisor for vacation rentals and alternative lodgings such as Airbnb. Travelers can use the platform to book tours, activities, experiences, and restaurants while vacation rental managers use it to offer deals and increase brand awareness.

To test their idea, Dinker and his friend launched a dummy website to see whether guests would use it to figure out things to do in Nashville and leave positive comments in their reviews on his friend’s listings. There was positive data for both, which encouraged Dinker and his friend to reach out to other Airbnb groups nearby.

After realizing that there was broad interest in the idea across the market, Dinker went to Michael Bryant, the Director of the Vanderbilt Business Center for Entrepreneurship. “I said, ‘Hey, look, this is this is where we are. We have a user base. We can understand where we want to go with the revenue model,’” Dinker said.

Working with Bryant, he refined his grant proposal and got it approved by Dean M. Eric Johnson. Dinker used the grant money to work on the idea during the summer and into his second year, focusing on companies that manage from 50 to 100 vacation rentals. The grant helped cover legal fees, the process of setting up an LLC, and the operating agreement. It also helped Dinker hire a professional design team to build out a real website.

Looking forward, Dinker will be launching the Hostmost website later this month and also just announced a partnership with Nashville Area Short Term Rental Association. “We’re trying to go after a channel that we feel hasn’t really been explored yet,” Dinker said. “I think we’ve gotten to that point where we feel like we have enough momentum. (The grant) has been immensely helpful.”

Thinking about an MBA?