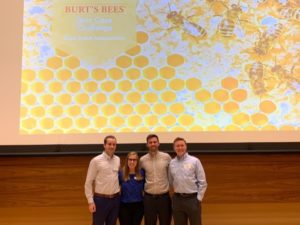 “We were excited to represent Vanderbilt in a competition featuring many of the other top MBA programs, and to deploy what we have learned from Owen’s marketing and communications faculty to Clorox’s challenge. The competition also served as a way for us to continue challenging ourselves while in business school, so we can ultimately provide more value to our future employers,” said Thomas Cleary.

The first qualifying round of the competition included a new-product-innovation-related deliverable due the first week of October. While the team was on fall break at the time, they were able to collaborate remotely and put together a deliverable. A few days after submission, they were notified that they had made it to the next round alongside nine other teams MBA programs at Harvard, Northwestern, Michigan (two teams), UNC, Howard, Indiana, Notre Dame, and Rice.

“Looking back, we’re thrilled that we decided to take a chance and enter the competition. It emphasized just how much taking advantage of opportunities at Owen can add to the business school experience. It was also great to see that even though all of the MBA students were clearly there to compete, everyone also wanted to learn from each other and see each other succeed,” said Emily Murray.

The teams convened at Ross for the next challenge. On Saturday morning, they were given their prompt — design a digital marketing strategy for the rollout of a new product with a sustainability component — and had five hours to put together their strategy and presentation. Each team then presented to the Clorox judges.

That evening, the top three finalists were announced: Vanderbilt, Harvard, and Northwestern. Each team took the stage in front of the Clorox team, Michigan faculty, and the other MBA competitors. The three finalists gave their presentations again, followed by a rigorous Q&A session.

“We learned that the judges greatly valued a thoughtful, nuanced, and robust response to each of their questions. They particularly commended our approach to the target persona for the product,” said Robbie Hickey. “We (also) learned the power of leveraging the distinct strengths of different members of the team in order to enhance the end product.”

“We were honored to make the final 10 and remained cautiously optimistic as the competition progressed, due to our different work experiences prior to business school as well what we have learned while at Vanderbilt. It was incredibly exciting to shift through the various rounds of competition and ultimately be named winners!” said Scott Luvin.

How I Got the Job: Program Manager II, Twitter
Read More >
Coast to Coast: Where the MBA Class of 2019 Is Working
Read More >
Can You Get into Consulting Without an MBA? Three Degrees to Get the Job
Read More >