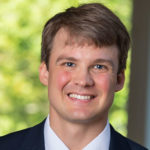 Hunter Land started his career in industry, not academia. After earning bachelor’s and master’s degrees in accounting from the University of Notre Dame, the assistant professor of accounting worked in the forensic advisory practice at KPMG’s Indianapolis office, investigating fraud and examining high-risk clients. He later followed his now-wife to Louisville, Kentucky; while she completed medical school, he worked in EY’s audit practice.

During his time at EY, Land began to think about the next step in his career. He’d been considering the idea of eventually entering academia since his master’s program, where one of his classmates planned to become a professor. “That was the first time where (getting a Ph.D.) entered my realm of possibility. I loved what accounting could teach me about business, but I also knew that eventually I didn’t really want my boss’s job,” he said.

“I had managers and people I worked closely with who I really self-identified with in terms of natural, inquisitive minds and wanting to keep learning…and those guys entered into Ph.D. programs,” he continued.

When his wife began matching for residencies, Land decided it was time to make the leap and go back to school. They applied at the same time, Land to accounting Ph.D. programs and his wife to residencies, and they both ended up at the University of Rochester in New York. “Everything all worked out. I felt like we hit the jackpot,” he said.

Land’s dissertation focused on disclosure statements and how constraints affect reporting. He’d felt these constraints himself during his time in the industry and the Ph.D. program, when he and his wife started a family.

“There’s kind of this traditional trade off in disclosure about the timeliness of disclosure versus the accuracy of information that’s presented,” he explained. “Being in the profession and understanding how it affects accountants, and then being in the Ph.D. program and having to make those priority choices myself, were the underlying motivators for my research topic and my dissertation.”

Land’s dissertation specifically looked whether accounting firms choose to report by the SEC reporting deadline or go beyond it. If they chose to report by the deadline, he also assessed whether those financial statements were later restated (because errors in the original version were corrected later on).

He used the NCAA Basketball Tournament, a.k.a. March Madness, as a constraint placed on accountants. All the big accounting firms are headquartered in areas where many alumni from successful March Madness teams live. The tournament also falls during busy season in the lead-up to the April tax filing deadline, which creates competing priorities.

“When firms are headquartered in areas where there are a higher population of alumni from schools that are successful in the tournament, meaning they reach the Final Four, then those firms actually are more likely to file late or restate, but it seems to be one or the other,” he said. “So it seems like firms are choosing which is more important,” i.e. filing on time or getting it right.

Land is excited to teach Essentials of Financial Reporting in the undergraduate business minor starting in January. He’s also spending a lot of time with his family; he and his wife welcomed their third child this summer. As for his research, he plans to continue looking into accountants, reporting, disclosure, and related topics.

“A lot of the accounting and finance literature has really applied it to investors themselves, and not necessarily people who are responsible for producing the information, whether it be accountants or analyst or other information intermediaries. I’m very fascinated about this kind of reveal preference,” he said.

‘Tis the Season to Be Stressed (And Why You Don’t Have to Be)
Read More >
When Making Small Donations, We Prefer Anonymity
Read More >
It Doesn’t Matter How Nicely You Wrap That Gift — Except When It Does
Read More >