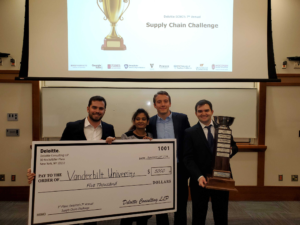 Vanderbilt initially hosted a four-team on-campus regional event on November 1, with the winning team advancing to the finals, hosted at Ohio State on November 21.

“OSU was very hospitable, and I am thankful to them for hosting us,” said Rastogi. “I enjoyed working alongside a great team and am thankful for the opportunity.”

In the regional event, teams were given 48 hours to design a solution for GE Healthcare to optimize processes and reduce costs at production facilities located around the world. Judges included Vanderbilt professors and representatives from Deloitte. The winning teams from each participating school convened in Columbus at the end of the month, where they were given 12 hours to solve a logistics issue for a fictional corporation modeled after Caterpillar. Deloitte Representatives from Caterpillar and Deloitte judged the final presentations.

“It was extremely fast-paced,” said Sanford. “When we turned in our recommendation (with 5 minutes to spare) we all remarked that it felt like a 12-hour sprint, after which we were completely exhausted.”

In the end, judges cited the Vanderbilt team’s digital-based solution, focus on financial impact, and presentation flow as factors in their first-place finish. The team also credited their breadth of functional and industry expertise. “We wanted a diverse group in terms of our backgrounds in the workforce,” said Russo. “Matt and I come from manufacturing/supply chain backgrounds, whereas Neha worked in Healthcare, and Ryan had a tech background. We thought because of our backgrounds, we could kind of cover all potential aspects in terms of what kind of case we could get.”

This was Vanderbilt’s first year to participate in the annual event, which made the first place finish sweeter for the team.

“I thought it was a really exciting opportunity to represent Owen and see where we stand within a competitive field,” said Barbar. “The fact that this is Vanderbilt’s first time in the competition…it was cool to go in there and show well for Vanderbilt.”

“We were honored by the opportunity to represent Vanderbilt in the championship round and are excited to bring the trophy home to Owen,” added Sanford.