Skip to main content link
Home
How I Got the Job: Consultant, BCG
Apply
News & Events

How I Got the Job: Consultant, BCG 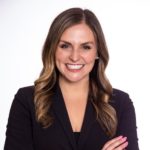 Katie Smigelski (MBA’20) originally looked at getting an MBA as a way to advance her marketing career. She believed her work at Walgreens in the area of supplier direct marketing for the company’s loyalty team would make her a good fit for a brand management role.

However, a manager who had previously worked in the consulting field encouraged Smigelski to consider that career path as well. The more Smigelski looked into it, the more excited she became about starting a career in consulting. “I realized I wanted to start off in consulting and get that wider exposure to skill sets and industries,” she said.

She applied to and interviewed at multiple consulting firms, ultimately landing an internship offer at BCG. After a fulfilling summer based out of their Atlanta office, she received and accepted a full-time offer to become a Consultant.

Smigelski says she really looks forward to getting to know more of her teammates. “So far, everyone I’ve worked with I really liked, not only on my team but I also loved meeting the whole intern class. I think it will be fun to be able to have a few more Fridays to be in the Atlanta office to meet more people and get a better sense of the firm overall,” she said.

Click through the timeline below to find out how Smigelski landed her offer.