How I Got the Job: Administrative Director of Clinical Integration, Vanderbilt Health Affiliated Network 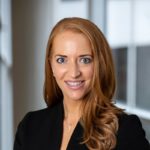 Esther Smith (MMHC’16), who has been working in healthcare since 2009, knew that she wanted an advanced degree in healthcare management that would open doors to further opportunities. While working at Ascension Care Management, her colleagues encouraged her to pursue a graduate program, which led her to enroll in the Master of Management in Health Care program in 2015.

“At some point, you need an advanced degree to propel you to the next level of your career. And the experience of earning the degree helped set me apart from my peers and prepare for the challenges we face in healthcare today,” Smith said.

New doors began opening for Smith while she was still enrolled in the program. Her Healthcare Strategy classes were taught by executives from the medical center, and they asked that she consider exploring opportunities within Vanderbilt. The executives connected Smith with their colleagues, and she began networking.

“Networking is essential to helping connect our physician leaders with key strategic planners, so that we can tackle new healthcare obstacles,” Smith said. “A master’s degree from Vanderbilt prepared me to navigate those obstacles, understanding that we are changing the current philosophies surrounding areas such as care standardization.”

After a round of interviews, Smith was offered the role as Manager of Clinical Operations for Vanderbilt Health Affiliated Network in 2017. “It was a chance to work and learn in a fast-paced academic medical center. I really enjoyed meeting people and learning the ways Vanderbilt approaches healthcare,” she said. After a year on the job, she was promoted to Administrative Director of Clinical Integration, the role she holds now.

Click through Smith’s timeline below to find out how she landed the offer.

Want to learn more about the Vanderbilt MMHC?