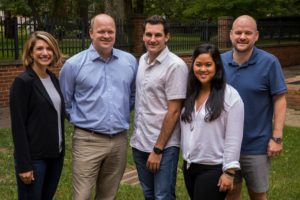 The world of minor league baseball looks very different than it did when Executive MBA student Scooter Kramer and his capstone team began their project for the Nashville Sounds in January 2020. Kramer, a self-proclaimed data nerd and one-time baseball intern, thought that they would simply be developing strategies that the Sounds could leverage in the upcoming season.

“They had a ton of customer data and sales data that they hadn’t had the bandwidth to work through,” Kramer recalled. “With my background in analytics, I got really excited about what all we could do.”

When social distancing guidelines marked a massive delay — and potential cancellation — of the Sounds’ season, the capstone took on new importance. Nashville’s minor league baseball team needed simple, actionable outcomes that they could apply upon reopening to optimize the customer experience and connect with new audiences.

Kramer had connections with Adam Nuse, the Sounds’ general manager and COO, through a charity board where they both served and his previous work with Major League Baseball teams. His background in baseball and analytics inspired Kramer to propose the project in late 2019. “Adam was more than willing to work with us,” he said.

The proposed capstone centered around data from the Sounds’ ticket sales, but also compared their marketing practices with those of other successful minor league teams. Kramer and the rest of the capstone group used the data to improve the Sounds’ dynamic ticket pricing and recommend some targeted marketing approaches.

“It’s really important to us to stay connected to fans rights now and create an improved, more customized experience for them when they can attend games again,” Nuse said. “This project has set us on a great road to do just that.”

The EMBA capstone team — which also included Emily Deal, Brian Martin, Ian Morrison, and Anna Myint — built a predictive regression model that anticipates what attendance should be based on the day of the week, the time of the game, and weather reports. The model helps the Sounds better staff the stadium for an improved fan experience and make strategic ticketing price decisions.

“We knew you want to price tickets lower for a game on a rainy Tuesday than a sunny Saturday afternoon,” Kramer said. “But what was surprising is that we found if the weather report predicted rain — even if it doesn’t rain — that affects attendance.”

They also discovered that neither give-away promotions nor conflicts with major events like the CMAs or Predator playoff games had much effect on attendance. This suggests that the Sounds’ have a strong fan base with a specific interest in baseball. The capstone team used that information, along with some benchmarking, to recommend a broader range of season passes.

“The Sounds’ smallest season ticket package is an 18-game package, and a lot of their attendees fall in the three to six game range,” Kramer said. “Offering a ballpark pass subscription for unlimited ‘standing room only’ tickets or a six-game season pass is a great way to boost attendance in a loyal audience.”

“If we bring together data on ticketing information and zip code, we can build some broad generalizations about the kind of emails that appeal to people,” Kramer said. “You might send a family deal to a mom in Mt. Juliet or a drink discount to a recent graduate in the Gulch.”

Benchmarking how other teams stay in touch with fans amidst season shutdowns also became a focus over the course of the project. Deal’s research found that teams do everything from calling customers just to “check in” to highlighting local sponsor companies on social media. This research also examined the impact of reassessing business models during slow periods like the pandemic. Nuse says the Sounds are considering the full array of recommendations from the project.

“We’d like to be playing baseball, but at least we’re taking this time to evaluate our business,” Nuse said. “We have a one-year hiatus to look at what kind of things we really want to adopt but have never had time to. This project can give us some extra direction on that.”

Want to learn more about the Vanderbilt Executive MBA?