Path to the Promotion: Manager of Enterprise Financial Systems, FedEx

After pivoting from retail to the corporate side, Jared Johnson (EMBA’18, Global Immersion Track) used the Executive MBA program to climb the ladder in just five years 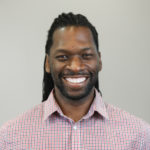 Jared Johnson obtained his undergraduate degree in industrial engineering in 2000. He had a resume built for an international career and was about to return from a year working in London when two planes hit the twin towers in New York.

“I came back right after September 11, and a lot of the jobs I was looking at, at that point disappeared,” Johnson says. “I don’t know that I built my resume the right way, but it also seemed hard to figure out how to get back into the corporate world at that point.”

Johnson ended up spending a decade working in retail with several entrepreneurial side ventures. But he still had his sights set on corporate America and eventually decided to take a step back in his earnings to take a step forward in his business career.

Johnson started making his dreams a reality by taking an entry level position at FedEx corporate. Five years later, he is living his vision of being a manager at a Fortune 500 company through years of dedication and hard work — obtaining an MBA from Vanderbilt was a key part of his strategy.

Click through the timeline below to see how Johnson made a complete career change and quickly climbed the corporate ladder with the help of a globally recognized Vanderbilt EMBA.

Thinking about an Executive MBA?