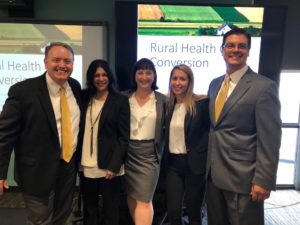 “The complexity of this kind of project was one of the reasons I was interested in doing the program,” Adams said.

Converting these facilities provides a more stable reimbursement stream — which enables struggling locations to remain open — while expanding the available medical services. Before Adams joined the MMHC program, he had only successfully converted a location to an RHC once, and it took two and a half years.

“It was an extreme example, because we had to widen the hallways by three inches,” Adams says. “However, I knew I could really benefit from learning how to manage projects better.”

With the help of his MMHC capstone team, Adams has helped Ardent Health convert 4 facilities in the year-and-a-half since his graduation. From January through the end of the program in the fall, students work in teams of 4-5 people on capstone projects for healthcare organizations, from ideation to implementation. The capstone gives students the opportunity to apply their classroom knowledge to the real world, while healthcare organizations benefit from students’ perspectives and consulting recommendations.

When Adams floated the RHC conversion as a possible capstone project to Burch Wood, the director of the MMHC program advised him to set his sights higher. “Burch told me that we really needed a playbook to identify all the steps, so that others involved in the project can know what we’re doing and why,” Adams recalled. “With a playbook, we can convey the specifics of what needs to be done to a wide audience without having to walk each individual through it.”

The vision was to create not only an Excel checklist with all the necessary steps but also a full workbook that went into the details and rational of each requirement to give each person involved a full frame of reference. “With these tools, our RHC conversion teams are asking clarifying questions instead of trying to understand what each step means,” Adams said.

While dividing Medicare and Medicaid information research among 5 healthcare professionals seems like short work at first glance, Adams said that visiting an RHC outside of Nashville is what really brought insight to the project.

“Everyone brought different perspectives to the visit and asked questions that I would never have considered,” Adams said. “Showing them a facility really helped them understand the result and reason behind what we were doing, and the observations they made helped me understand things I’d glossed over in the past.”

Hema D’Souza, as a laboratory outreach manager with a background in chemistry, asked about the lab test processes. Jenny Mataj, a program manager with Vanderbilt University Medical Center, asked about patient flow through the RHC. Thomas Bogdan, with his experience as an administrator in clinical departments, was interested in the revenue cycle process and billing procedures.

As both a capstone team member and the project sponsor, Adams was in a unique position to share knowledge about the difficulties of RHC conversion. He was also able to direct the project throughout, critically observing where the team might add value. The result has been a dynamic shift in the way that Ardent Health approaches RHC conversions.

“Even if I had had an unlimited amount of time, I never would have been able to put together something as comprehensive as our capstone team did, because everyone came at it from so many different angles,” Adams said. “Seeing it in use after the fact just really confirms how well the project came together.”

Although the resultant RHC conversion playbook was created with Ardent Health in mind, Adams says it would be of value to any organization attempting such a project. Ardent Health has already used it to convert 4 pre-existing centers, with future plans to create 4 to 5 more RHCs.

“My future plan is to be able to pass this on to a project manager and have them run with it,” Adams said. “The real magic to this is that we will be able to expand it and people can work independently. So, there will be far fewer limitations on the number of RHCs we can convert.”