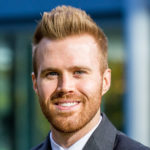 For a self-described risk-averse person, Assistant Professor Erik Olson takes a unique view of accounting. “Most of my closest friends are corporate finance researchers,” he said. “I’m always looking at my research through that lens: How do managers’ motivations affect financial reporting, and how do we improve upon that?”

Olson claims that his time spent pursuing a doctorate at Yale — where the departmental lines between finance and accounting are porous — imprinted this perspective on his research. However, his interest in the intersection between finance and accounting is what actually brought him into academia, starting with a project during his master of accounting. “The way I wrote it was not what Dean McGill was expecting. I wrote it like a scientist,” Olson said. “He told me he didn’t even think a person could look at this topic like that and that I should probably look at a PhD.”

The idea didn’t appeal to Olson at first, though. Up until that point, he’d considered accounting a bit of a backup plan. Then all thought of a law degree or other business pursuits disappeared after McGill showed him two accounting papers on how managers make actual allocation decisions based on what the market tells them. “That was it. That checked all the boxes for me,” Olson recalled. “The dean told me that is what accounting research is really all about, and that’s how I got into the field.”

Olson spent two years working in international tax and transfer pricing at KPMG after obtaining his MAcc, and the work gave him the research idea for his first doctorate paper. He saw the motivations influencing financial reporting at play with a tax bill providing a break for investing in physical assets.  “My client was looking at making a $60 million investment that would have saved them $27 million, if the provision went into effect. But, if not, they’d rather wait to invest that money,” he explained.

Olson naturally wondered if any research considered how many companies were in the same boat and began researching it for his first paper at Yale. After attending a lecture on a working paper that addressed the question as an ancillary part of its research, he had to change gears.  “There was nothing in the public domain about this paper because it hadn’t been published yet and didn’t specifically focus on my topic,” Olson said. “That was my first exposure to the fact that even in academia, work can be really fluid.”

He’s since learned to ride the wave of research inspiration as it comes, with one of his favorite paper ideas coming from a CNBC newscast he was watching over breakfast. During the show, an expert criticized federal tax holidays that incentivize multinational corporations to repatriate their overseas funds (i.e. bring the money back to the U.S.). The expert argued that the holidays did nothing for the job market or the American economy and claimed that managers used these funds to buy back shares and pad their financial reporting rather than investing in employment or raising wages.

“It was such a mike-drop statement that tax holidays are a broken policy tool, yet we continue to use them,” Olson said. “I thought it can’t be that simple. We can’t be using this if it’s bad, and we know it’s bad. I wanted to see if managers had a good reason for doing these buybacks.”

Olson set off trying to answer whether the make-up of an investor base actually influences why companies make stock repurchase decisions. The question at play was whether the type of management in a company attracts short-term, big win day traders versus long-term holders focused on the company’s overall value or the investors’ priorities affect company policies.

“The constructs of the law — because it was a mandatory tax holiday for all firms — gave us a really good way test the influence running both directions,” Olson said. “When money comes to the firm in the wake of the Tax Cuts and Jobs Act of 2017, they seem to be making capital allocation decisions based on their investor base.”

Another of Olson’s papers examines the relationship between buybacks and how managers manipulate earnings in financial reporting. He found that managers who manipulate earnings on paper with tools like discretionary accruals were likely to employ buybacks as well. The more the CEO has invested in company stock, the more likely the on-paper and buyback manipulation will be used together. “I also find that firms with a CFO who is beholden to the CEO are more likely to use these opportunistic share repurchases, and short-horizon ownership strongly influences executives to use them as well,” he said.

In joining Vanderbilt, Olson says he’s found a familiar home in the departmental structure between finance and accounting. “It’s similar to Yale’s in that the lines are very blurred, which is what attracted me,” he said. “When some of Vanderbilt’s finance people sat in on my paper lecture, it seemed a natural fit.”