Originally from Hungary, the Professor of Finance concentrates on delegated portfolios and conflicts of interest in her research 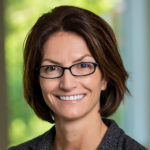 Finance and economics were just becoming subjects students could study when Professor Veronika Krepely Pool entered university in Hungary. “It was a communist country until I was in high school,” she says. “These concepts were so different than what I grew up with, and they were really, really cool in Hungary then. I became really interested in finance.”

During the course of her studies, Pool met someone from Murray State University who encouraged her to look into opportunities to study in the U.S. “There weren’t too many opportunities in the 90s, and I didn’t know U.S. colleges at all,” she recalled. Still, Pool found her way to Murray State to finish an undergraduate degree in economics.

Within 2 years, Pool moved on to a master’s degree in economics with emphasis on finance at Murray State, and later, at the prompting of mentors, she pursued her doctorate in finance at Vanderbilt. Her original plan had been to return to Murray State to teach, but her time at Vanderbilt evinced an interest in research. Her conversations with Professor Nick Bollen about his work hooked her on the economics at play in mutual and hedge fund management.

“Incentives are a critical aspect of every economic problem, so to me it is really interesting to dig into how these incentives play out in portfolio management,” Pool said. “Portfolio managers do not necessarily have the same interests as their clients, and this generates conflict.”

Pool co-authored a paper with Bollen during her doctorate that examined whether hedge fund managers misreport their numbers to data vendors. They later published two additional papers on the same topic. “There is an incentive and opportunity for hedge fund managers to improve their performance history to attract clients,” she said. “If you have a large negative number, it’s going to be really hard to misreport that. But small negatives don’t show up as easily. When we look at the statistical patterns, we see a huge hole around zero with lots of small gains but very few small losses.”

Pool credits their first publication to luck, as few believed that fraud was a problem in the hedge fund industry. As a condition of that first publication, they were required to change the term “fraud,” because the publishers considered the language too strong. “When the Madoff scandal broke in 2008, it became a lot easier to find journals to publish this work,” she said. “By the time we published the second paper, it was clear it was fraud.”

Pool’s research also examines similar dynamics in mutual fund families. “There should be a Chinese wall between these funds, but we see that they interact,” she said. “There is an incentive to maximize family profit, which is not the same as maximizing the individual fund or shareholder interests.”

Two of her current working papers look at conflict of interest in 401K plans where the record keepers provide some other services. Her research finds that record keepers who determine what kind of options to offer participants tend to favor their own proprietary funds, even when they are dominated by funds from other mutual fund families. Pool notes that her research helps reveal the misaligned incentives in finance, describing her work as forensic economics. “There are never smoking guns. It isn’t all obvious fraud,” she said. “We only have data, and we look for footprints in the data.”

Her research also demonstrates that managers’ personal backgrounds influence portfolio decisions. One of her papers examines how simple proximity to other managers can even affect a portfolio profile. “We use public records to calculate the walking and driving distance between houses and pair up millions of addresses, and we find that portfolios become very similar when managers interact with their neighbors a lot,” she said.

Another paper demonstrates that inherit human bias showing up as footprints in the data sometimes adversely affect shareholders. The study finds that fund managers over-invest in their home states — and while the assumption is that this investment is information-driven, the holdings tend to underperform. Pool noted that this is a very natural human behavior. “People choose investments that they are familiar with,” she said. “We all think we have unique insights from home that we want to share.”