Eric Johnson, Dean of the Vanderbilt Owen Graduate School of Management, announced that Neil Ramsey (MBA’83, BE’82) will speak at the school’s Class of 2020 Commencement on May 2. Mr. Ramsey was originally slated to speak at last year’s event before it was postponed in the wake of the pandemic. 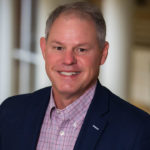 Mr. Ramsey founded RQSI in 1986 and has been involved in the development of systematic investment strategies. He is responsible for all investment activities for RQSI including Private Equity and Real Estate investments.

Mr. Ramsey is also CEO of Conficare, a designer, builder, and financer of senior living facilities.

Mr. Ramsey is on several boards, including Catholic Education Foundation, Kentucky Governor Scholar program, and hOp, and is former head of the investment committee of the Kentucky Retirement System.

He and his wife reside in Louisville, Ky, and have 5 children, of which 2 are Vanderbilt graduates.