How I Got the Job: PIMCO Institutional Group Account Manager

After graduating from Baylor University, Hunter Bingham dove into the world of corporate accounting through a role with American Airlines. During her 2 years working as a financial analyst in the International and Cargo Divisions, Bingham found that her passion and career aspirations were more in line with finance than accounting, which ultimately led to her decision to return to school for an MBA.

“My role with American was very technical, and I was staring at spreadsheets all day, so I was just looking for something that was more forward-facing rather than reporting-based. I also really like working with people, so I wanted to find a role that had more of a client-facing component to it, whether it was internal or external stakeholders,” said Bingham.

Bingham says she was attracted to Vanderbilt Business because of its smaller class sizes and personable experience, as well as the hybrid class structure during the pandemic. She was accepted into the program and began her journey to earning her MBA at Vanderbilt Business in August 2020. She was also impressed with the network of Owen Alum, who aided in her decision to join the Vanderbilt MBA program.

“I worked with so many people at American Airlines who graduated from Owen that encouraged me to pursue my MBA and consider applying to Vanderbilt Business. Being able to connect with them and hear their experiences was something that played a huge part in my decision to go to school here,” said Bingham. 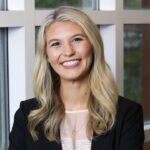 After doing some research and narrowing down a list of companies she would like to work for, in October 2020 Bingham reached out to a recruiter at PIMCO, which was at the top of her list. Bingham networked with MBA graduates who work at PIMCO to see how their programs helped them get to where they are in their careers. After earning a virtual Customer Management Internship with the company, she was offered a full-time position as Institutional Group Account Manager at PIMCO’s Newport Beach, California office, which she accepted.

Through her internship and continued coursework at Vanderbilt Business, Bingham has been able to sharpen her technical skills of finance and statistics. She credits the network of Vanderbilt Business faculty, alumni, and especially her peers with providing her with opportunities to network and connect with people in her desired industry. She says through her leadership roles in campus organizations including Student Government and being a Career Management Center (CMC) Host, she was able to build lasting friendships and professional relationships that opened many doors for her.

“My peers were so valuable and that’s what my favorite part of the business school is thus far is learning and working with my peers. I really love my class and it’s been so great to be around people who are so bright and really excited about what they are doing. I would not have done as well in my PIMCO interview if it wasn’t for a couple of my classmates. The network of Vanderbilt Alumni, and their willingness to help, definitely connected me to people outside of the school that helped me to land my job, and I am so grateful,” she said.

Click through the timeline below to see a visual of how Bingham got the job.