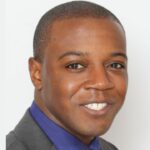 Jack Hatcher graduated from the United States Naval Academy in 2010 and went on to serve as a Submarine Officer in the Navy for more than 6 years. After resigning from the Navy, he began working for Ethicon, a Johnson & Johnson medical device company, as a sales representative.

While still in the Navy, Hatcher attended the 2016 Service Academy Career Conference in Savannah, Georgia, where he met a representative for the Executive MBA program at Vanderbilt Business. He was impressed by the program, and after working at Johnson & Johnson for about a year, Hatcher applied and was accepted.

He began the program in August 2018.  As his first year progressed, Hatcher learned essential technical skills through courses like finance and accounting.

“Those were the areas I was lacking (finance and accounting),” he said. “Once I got into accounting, I understood not only how businesses work, but how leadership makes decisions. When you understand leadership and their mindsets around decision-making, you can be a better asset to your management team and eventually groom yourself into becoming a leader.”

As Hatcher’s education progressed, so did his career. He transitioned into a new position at Bernhard Energy Solutions’ Nashville office in early 2019. He remained there for about a year until the company decided to go in a different direction, consolidating its employees into fewer offices. His days at Bernhard coming to an end, Hatcher went into job search mode.

He leveraged Vanderbilt’s Career Management Center to help identify and land the right position. He participated in resume reviews, mock interviews, and discussions about his career trajectory with CMC coaches, including Senior Associate Director of Alumni and Executive Career Management Lacy Nelson. An operations course inspired Hatcher to consider positions in operations, and he ultimately decided to pursue working at Amazon.

“I was naturally interested in operations being a military guy, I like processes and trying to improve processes where there are flaws, leakages, or bottlenecks and how to manage those. That’s something that really stuck out to me (with operations), and I think that’s what helped me to get my job at Amazon,” said Hatcher.

Hatcher also credits his Vanderbilt network of peers, faculty, and alumni for helping him navigate landing an interview with Amazon. He networked with some of his former Navy colleagues as well as Vanderbilt Executive MBA alums who currently work for Amazon, all of whom helped him find the opening for his role of Senior Program Manager.

“Being at Owen really taught me the importance of building relationships,” says Hatcher. “I didn’t quite understand that before, and it’s not something I feel is really instilled in young people. You’re taught to make good grades, keep your grades up, and work hard, and you will be successful. I feel there should be a greater value put on getting to know the folks around you,” he added.

Hatcher officially started working at Amazon in April 2020, just a couple weeks before he graduated from the Executive MBA program.

Click through the timeline below to see a visual of Jack Hatcher’s Path to the Promotion.