Through his Zoom window, Endre (Andy) Sarkany, Holocaust survivor, recounted the first time he saw the swastika armband; at 7 years old, he watched the welcoming of Nazi soldiers as they marched into his hometown of Budapest, Hungary. 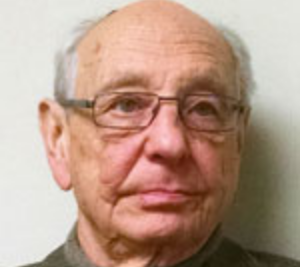 The Owen Jewish Business Association (JBA) partnered with the Jewish Graduate Student Initiative to virtually host Sarkany on February 7. Sarkany spoke on his personal experiences with the Holocaust, his immigration to America, and lessons applicable to today’s world.

“We are fortunate to live in a time where Holocaust survivors are able to share these stories firsthand, and it is crucial that we hear these stories to really personalize these experiences and the horrors many people went through,” says Anna Kovach, JBA President. “The impact of hearing these personal stories is deep and long-lasting and helps support the effort to “Never Forget, Never Again.”

Sarkany presented photos as he talked about gas chambers, the “yellow star” he had to wear as a label, and how “they shoved Jews into cow cars like sardines,” with no food, no water, no facilities for 3-4 days. He talked about staying out of school because kids spit on him and called him names like “dirty Jew,” how his father was sent to a concentration camp, and the ways that antisemitism is demonstrated today.

Noting that “antisemitism is all over,” Sarkany called on the audience to be vigilant, as he cited the 2018 Pittsburgh synagogue shooting and the recent Texas synagogue attack as examples.

“As Sarkany mentioned, the more people who hear stories [like his] and understand the atrocities that were committed against the Jewish people and many other communities across Europe, the more people we have who can advocate for those in need today and in the future,” says Kovach.

After giving examples of antisemitism and white supremacy, Sarkany advised the audience to replace the word “hate” with “love” and “hope.” Sarkany noted that understanding love and hope and keeping those words in mind would make us “able to build a peaceful world of harmony.”

Open to Vanderbilt Business faculty, staff, and students, the virtual event was well attended, with community members attending individually or in a communal space arranged by JBA. “We were lucky enough to have 82 people attend who now will continue to share Sarkany’s story and be advocates and educators for others on the atrocities of the Holocaust,” says Kovach.

“This event was important to our JBA Board to help educate our classmates and give them an opportunity to hear from a Holocaust survivor firsthand,” Kovach adds. “The outpouring of support and gratitude for the event has been overwhelming.”

The JBA provides a tool for networking, education, cultural outreach, and a connection to the Jewish community. Contact the JBA to learn more.