How I Got the Job: Associate, EY Parthenon 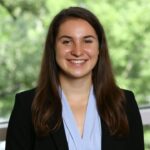 Kaitlyn Judge graduated from the University of Texas at Dallas in the spring of 2021 with a bachelor’s degree in Finance. After completing her undergraduate degree in 3 years, she decided to spend her fourth year pursuing a Master’s of Science in Finance (MSF). The decision to continue her education in finance came after several internships.

“I had done internships in equity research and investment management, and I thought they were super interesting, but I wanted to have more exposure to different roles within finance that were more client-facing; that way I could work in finance but also work with people more,” Judge said.

“I thought pursuing the (MSF) program would give me more time to explore and have more of those experiences and sharpen up some of those finance skills that I had touched on in undergrad, but with COVID and remote learning I was lacking a little bit,” she added.

Judge was attracted to the Vanderbilt MSF program because of its challenging curriculum, the opportunity to work on career development with career coaches, and its collaborative environment. “As an athlete, I love the fast-paced, ambitious, competitive side of things, but I didn’t want to be in a learning environment that was cutting other people down and winning at the expense of others,” Judge said. “From the conversations I had with students at Owen, I learned here, there was a team environment where we’re sharpening each other and making each other better and not cutthroat competition,” she added.

Judge began the program in August 2021 and immediately began work on her career, networking with Vanderbilt MSF alums who worked at regional consulting firms. This ultimately solidified Judge’s decision to pursue a career in consulting.

“Getting to connect with alumni who were in consulting was an integral part of my recruiting process, because I didn’t know anything ahead of time. I also leveraged my network of peers and got to work with second-year MBA students who had consulting internships.They helped with case prep and showed me how to put my best foot forward with the (job) application process,” said Judge.

By September 2021, the MSF recruiting cycle had begun, and Judge was interviewing and connecting with several firms as part of the process. She landed a virtual interview with EY Parthenon in Boston in early October 2021, and by the end of the month, she was invited to a virtual Super Day with EYP. EY offered Judge a full-time Associate position in November 2021, which she accepted shortly after.

Following graduation in May 2022, Judge is looking forward to moving to Boston and starting her journey with EYP. Click through the timeline below to see a visual of how Kaitlyn Judge got the job as an associate at EY Parthenon.