How I Got the Job: Financial Analyst, IBM 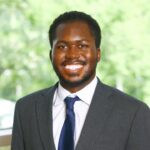 Matthew Seward discovered his passion for finance while studying abroad in London during his sophomore year at the University of Tennessee, Knoxville. While abroad, he held an internship with a non-profit where he was in charge of their fundraising efforts. “That’s when I realized finance is so essential to every industry, because without money you can’t really do the things you want to do,” he said. From there, he held several other finance internships, including ones with U.S. Bank and the Tennessee Valley Authority.

As he got closer to graduation, Seward knew his next step was to pursue a Master of Science in Finance. After researching MS Finance programs, Vanderbilt Business rose to the top of his list, due to its location in his home town of Nashville and the exceptional employment outcomes the program’s graduates produce every year.

Seward was accepted in Vanderbilt’s MS Finance program in October of his senior year and soon began meeting with the school’s Career Management Center to perfect his resume ahead of job recruiting. He was able to land an internship with IBM for the summer between his college graduation and the start of the MSF program.

“When I was looking to land my IBM internship, I would tell recruiters, ‘I’ll be joining Vanderbilt’s Master of Science in Finance program,’ and they were really impressed by that even before I started the program,” said Seward. “When you tell employers you’re going to Vanderbilt Business, it doesn’t just automatically make you qualified for the job, but I do think it gives you leverage.”

Seward completed his virtual internship with IBM in July 2021 right before entering the MS Finance program at Vanderbilt. By mid-August, IBM extended him a full-time job offer for a Financial Analyst role in New York City. He relied on the CMC’s insight to learn more about negotiating salaries before accepting the role in late August.

“The compensation IBM offered me was good, and normally I would’ve just taken it, but after meeting with a CMC coach, she let me know it never hurts to negotiate, because the worst they can say is ‘no’,” Seward noted. “That meeting really helped me learn to negotiate a salary because I had never done that before and it ended up being successful in getting me that extra bump in pay.”

Since landing a job, Seward has spent his time at school honing technical skills he will need to succeed at IBM.

“The financial modeling course I took with Cherrie (Wilkerson, Program Director, MS Finance) really helped me with my Excel skills. I knew how to use Excel, but after taking that class, I definitely feel more confident, and I know what I learned will be directly applicable to my role with IBM,” he said.

Seward is also staying involved in campus organizations, including the Owen Tech Club, and building leadership skills through his work as an MS Finance ambassador and MS Finance Coach.

Click through the timeline below to see how Matthew Seward got the job.