Skip to main content link
Home
MBA How I Got the Job: Consultant, The Chartis Group
Apply
News & Events

MBA How I Got the Job: Consultant, The Chartis Group 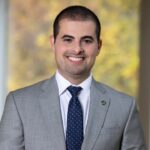 Alex Blackman graduated from Ithaca College in New York in 2016 with a Doctorate in Physical Therapy. He started his career at an outpatient clinic and later a rehabilitation hospital, where he mostly cared for stroke and brain injury patients. While working at Burke Rehabilitation Hospital in New York, Blackman was introduced to some operational aspects of the hospital and became interested in learning more about the business side of the healthcare industry. This led to Blackman ultimately deciding to go to business school.

“Around that 3- or 4-year mark of doing physical therapy, I really liked treating patients and taking care of them, but I feel like with that job, you almost hit a ceiling where there’s not really much more room for advancement,” said Blackman. “So going back to get an MBA, I thought was a good way to kind of move up and just get more of a chance to have a larger impact on patient population. Even though it’s great treating patients one on one, being able to put in procedures and protocols and different things that can really help a larger group of people,” he added.

He was drawn to Vanderbilt Business because of its small class sizes, sense of community among students, and the healthcare concentration the MBA program offers.

Shortly after entering the Vanderbilt MBA program in the fall of 2020, Blackman hit the ground running, meeting with the Career Management Center (CMC) several times. He leveraged the CMC to craft his story for his resume, and practice his interviewing skills. The CMC informed Blackman of an internship opportunity with Monroe Carell Jr. Children’s Hospital at Vanderbilt and provided him with the contact for Kayla Cohen (MBA’16) who serves as the Director of Operations at the hospital and leads the internship program. This networking ultimately landed him an interview with the hospital in February of 2021 and a return offer of Project Lead Intern, which he accepted in March 2021.

After completing his internship in July, Blackman returned for his second year of the MBA program and began preparing to interview with companies for a full-time position.

In September 2021, Blackman reached out to the Human Resources office for The Chartis Group in Nashville to learn more about the company and what positions they had available. Through networking with HR, he was invited for a series of interviews in October 2021, which resulted in a return offer of Performance Improvement and Strategy Consultant. Blackman accepted the offer just before Thanksgiving break.

“What drew me to The Chartis Groups in particular was their focus on the provider side of healthcare, and that a lot of their consultants work in health care organizations before going to be consultants there.”

Blackman points to his involvement with the Owen Strategy and Consulting Club , Vanderbilt Business Healthcare Association, and leading a Healthcare Symposium for sharpening his leadership skills. He also credits the many healthcare and management courses he took during the program with providing him that business knowledge he was lacking, to support the technical skills he already possessed.

Click through the timeline below to see a visual of how Alex Blackman got the job.