On February 24th, Maxim Ieogrychev-Krimberg woke to a phone call at 6:00AM from his wife. The leadership development consultant was in Kryvyi Rih, an industrial city located about 500 km from his home in Kyiv, slated to deliver a training session later that day.

She called with the same news the entire world was waking up to: Russian had commenced an invasion of Ukraine. “She said that everything started; the worst had started,” he said.

Maxim’s mindset became more urgent, with a sole focus on returning to his family. “I had train tickets for later that day. But it was immediately understandable to me that I should be doing something right now, not waiting for my trains the next day. I tried to get to Kyiv earlier but the transportation had already been challenged”. He ended up having to catch his train before returning to Kyiv and his family the following morning.

Three hours after his return, Maxim and his family had a plan. They left Kyiv that day for a village 30 km away, where they united with other families at the house of a relative – “3 families, 6 adults, 4 children, a dog, and a cat” once everyone arrived.

The travel, unfortunately, didn’t end in the village. The 10 family members continued to move around the country as the conflict progressed. In the roughly 2 months that have passed since the start of the invasion, Maxim’s group has moved 5 times for security reasons. 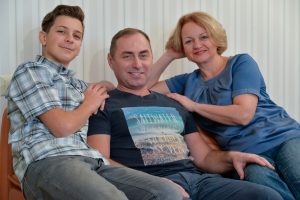 Maxim’s wife Natalia and son Alex departed for Germany last week, where Alex, a 10th grader who studies music, can continue his formal education, which has been practically nonexistent for the past 2 months. With higher education just around the corner (secondary education in Ukraine ends after 11th grade), Maxim and Natalia prioritized finding a secure location where Alex could continue his studies.

Maxim recently made a return to Kyiv alone; his group splits and reunites based on the housing available around them. “What’s going to happen next, I don’t know, but for the time being..it’s okay, I’m here in Ukraine,” he said.

As he’s done since February 24, Maxim operates on a day-to-day basis, with information being the primary driver of action. He spends his days gathering the latest information on the conflict from various internet sources and his network, which then drives discussions amongst his group about their strategy for the next day. He hides in apartments or shelters when alarms blare, waiting minutes or hours for them to cease. He sees the suffering, physical and mental, on a face-to-face basis.

When asked about what the world may not understand about the situation in Ukraine through television and the internet, Maxim points to the intentionality and urgency of his day-to-day experience, one that all Ukrainians are living with at the moment. “This is the first time in my life I’ve had the experience of staying in a queue for a loaf of bread for nearly 2 hours. Many people did not get any that day. Those were the first days of the war and the location was quite close to the front line so the logistics and food supply were under threat,” he said. “Understanding what evil means comes with experience.”

Living in a war zone that one calls home presents challenges too numerous and complex to describe here, but Maxim maintains a genuine sense of optimism and positive energy, which he brings to his days as well. He works on a number of volunteer projects, raising funds for the Ukrainian army among them. He’s working with others to develop housing-related projects to help the growing number of refugees across the country.

Maxim has also connected with Vanderbilt classmates and the broader Owen network, including Dmitry Villevald (MBA’02), John Buehler (MBA’02), Natasha Moore (MBA’03), Rebecca Sharp (MBA’91) and Tim Mayor (MBA’02), who have offered counsel, housing, and their connections. Dean M. Eric Johnson and CMC Director Lacy Nelson have also offered assistance as well. “I appreciate all of their support very much,” he said.

He also leaves some time to think about the future and what he will do professionally when the conflict ends. He doesn’t believe the state of the economy could support his consulting work, noting the World Bank’s estimate that Ukraine’s GDP will fall by almost 50% in 2022. He’s considering a return to the corporate world, where he worked for the majority of his career, or perhaps a government role that could facilitate reconstruction and rebuilding. The latter intrigues him, because “in the future, people like me (western-educated Ukrainians) will be needed to serve as a bridge between Ukraine and the Western world.” Perhaps, after Ukraine is rebuilt, he could envision a return to the type of leadership consulting that brought him to Kryvyi Rih on February 24.

What’s the key to Maxim’s optimism in the face of such visceral adversity? He offers 3 words of advice: