The MMHC Capstone Strategy Project is a foundational element of the Vanderbilt Master of Management in Health Care program. A totally immersive experience, the Capstone challenges student teams to use tools and concepts from their coursework to address  a challenge in  the healthcare industry. Group members, which harken from different corners of the healthcare world, typically bring their unique perspectives to the table as well. In this Capstone Project recap, Orrin Sumatra, Division Administrator at Vanderbilt University Medical Center and Joao de Andrade, Chief Medical Officer at Vanderbilt Lung Institute (both MMHC’23), explain their group’s project. 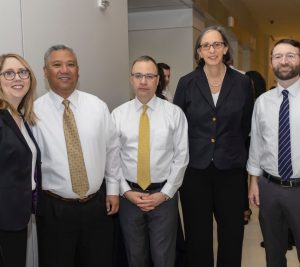 Most commonly found in smokers, COPD is defined as a group of lung diseases that block airflow and make it difficult to breathe. It’s a disease that resonated with team members based in and around the state.

“Tennessee happens to be the middle of the area with the highest prevalence of COPD in the country,” explained de Andrade. “Elderly patients who are admitted to the hospital have a higher chance of being readmitted, and those readmissions cause a higher risk of death and additional loss of quality of life.”

The team devised a way to give patients a better chance for successful recovery when they leave the hospital.

The group found that readmission rates for patients with COPD are influenced by the level of care they receive after they return home from being treated at the hospital.

“We found a publication where the care went beyond the hospital,”de Andrade said. “Patients would receive a coach assigned to them to check on them and make sure they were educated on how to take the medications and use oxygen, and even keep up with them to make sure they were going to any follow up appointments.”

They liked the concept of improving aftercare support for patients, but wanted to create a solution that didn’t rely on human interventions. The team initially considered developing  a new app to support discharged COPD patients, but they eventually decided to leverage features within the EPIC-based “My Health at Vanderbilt” (MHAV) platform that were already available through VUMC.

“Within MHAV, we were able to work with health IT experts to develop what we call a ‘virtual coach’ using a feature called ‘MyChartCareCompanion’. It allows one to develop a set of reminders that start automatically after a patient is discharged,” said de Andrade.

The group developed a set of reminders that prompt patients to exercise and take their medication, among other tasks, while also providing instructions for things like how to properly use an inhaler and book follow up appointments.

The group was grateful for the support of their VUMC mentors Derek Anderson, VP of Business Improvement, and Wright Pinson, Deputy CEO and Chief Health System Officer, as well as Burch Wood, Director of Healthcare Programs at Vanderbilt Business.

“We are now educating providers how to use this resource, and we are still collaborating with the department that handles discharging of patients, so they can leverage this instrument as a way to support patients going home,” he said.

Click here to learn more about the MMHC Capstone Project.

Want to learn more about MMHC?