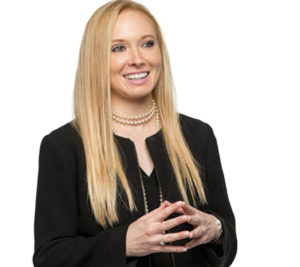 Who: Jessica Kennedy is an assistant professor in organization studies who came to Vanderbilt in 2014, following two years as a postdoctoral fellow at the University of Pennsylvania’s Wharton School, which is also her undergraduate alma mater.

Before embarking on an academic career, Kennedy worked as an analyst with Lazard and Goldman Sachs. It was her investment banking experience, in fact, that propelled her toward pursuing a Ph.D. studying how organizations impact behavior. “I never expected to be working on these topics, I’ll admit because I studied business for undergrad and was really interested in finance,” Kennedy says. “But I then went and worked in investment banking for a few years, and while the deals were really interesting, I also saw these dynamics surrounding how groups accorded power and status and how people made decisions—and how those factors were driving performance in teams.” Ultimately, she got so interested in these questions that she went back and talked with professors from her undergraduate days about their research projects before enrolling in the University of California-Berkeley’s Haas School of Business, where she received her doctorate in 2012.

What she’s researching: Kennedy’s research falls into two main areas. One involves studying power and status hierarchies, examining the factors that elevate individuals within organizations and how that influences their decisionmaking. “In organizations, there are a lot of social dynamics that make the pursuit of excellence in one’s work more complicated. I think that competition for social status is one such factor,” she says. “Hierarchies can also hinder decisionmaking.

For instance, I have research currently under review that looks at how holding a position higher in the hierarchy influences a person’s willingness to express disagreement with an unethical course of action embraced by a group.” The other key topic Kennedy explores is the role of gender in career and negotiation outcomes.

In a study from 2014, Kennedy looked at how gender affected the likelihood a person would be the target of deception in negotiation. She and her co-authors found evidence of a stereotype about women being more easily misled than men, and it corresponded with more unethical behavior in negotiations with women. “We found that men and women alike were targeting women with more deception than men,” Kennedy says, explaining that low expectations about a negotiator’s competence (not high expectations for warmth) drove deceptive intent.

In one of the experiments, MBA students held mock real estate negotiations where buyers decided whether to reveal that the “real” intention for the use of the land in question contradicted the seller’s wishes. Buyers admitted to being deceitful to 22 percent of female sellers, compared to 5 percent of male sellers. While stereotypes are difficult to “disconfirm,” as Kennedy puts it, she suggests there are things women can do in negotiation to avoid deception. These include persistently questioning information, asking for verification from multiple sources, writing critical terms in contracts and signaling a willingness to retaliate against deception. Kennedy’s most recent paper on this topic argues that the perception of women as inherently bad negotiators is a myth. Instead, women possess the same inherent skills as men, but they face various impediments that negatively affect outcomes.

One barrier that Kennedy identifies is “cognitive.” Building on her earlier research that stereotypes about women in negotiations lead to more deception, Kennedy says that negative stereotypes about women negotiators depress their confidence and create a cycle of self-fulfilling prophecies that undermine women’s performance. Another impediment that women face in negotiations is created by negotiating counterparts’ motivations. This speaks to the psychological need for negotiation counterparts to believe that women lack skills in this area as a way to explain why women are often underpaid compared to men. “We generally need to believe that we live within a fair, stable, understandable, controllable social order,” Kennedy says. “The idea that people doing the same type of job—and performing equally well at it—get paid differently is really threatening to most people.”

The third bias facing women in negotiation has to do with the way research has been conducted in this domain. Kennedy says studies in negotiation are often conducted using short-term contexts in which only economic outcomes matter. “In the real world, of course, we care about the relationships that we build through negotiation,” she says. “Because our negotiation simulations aren’t capturing the value that positive relationships bring within longer-term, higher-stakes environments, we may be underselling women’s negotiating abilities.”

Why it’s important: The field of organizational behavior—which draws from disciplines like political science, sociology and psychology—started in part because researchers realized that people in organizations often don’t behave in rational ways that maximize self-interest. Kennedy says they bring a variety of other motives that affect their behavior and attitudes toward others.

In terms of her work on gender and negotiations, Kennedy says there are significant real-world issues involved. There is an economic toll in the sense that women may receive a lower salary or have to pay more for high-cost items like a house or a car. There is also a psychological toll in the sense that negotiators are less satisfied with their working relationships when deception is part of the interaction. Ultimately, biases against women negotiators damage relationship building and undermine the satisfaction of both parties with the outcome of the interaction. Because relationships are such an important part of why people enjoy working in business, these biases could ultimately reduce interest in the work at hand.

Although she hopes to encourage negotiators to identify and correct the biases that may undermine women’s performance, Kennedy has a few recommendations to help empower women negotiators. “Women perform as well as men in negotiations when they believe that negotiating skills are a product of hard work, rather than innate ability,” Kennedy says. “Women negotiators should keep in mind that negotiating skills can be developed and that a single negotiation isn’t a test of their skill. Instead, it’s a learning opportunity that can help them overcome the impact of some of these negative stereotypes that they face about their abilities.”