Moving Up (And Around) in the Financial World

When Ronke Oyekunle (MSF’15) graduated from Tufts University in 2013, she “essentially had no idea what I wanted to do with my career,” as she recalls. The former track and field athlete found a job in the accounting department of a small investment bank in Boston and tried to figure out what she wanted her post-college career to look like. 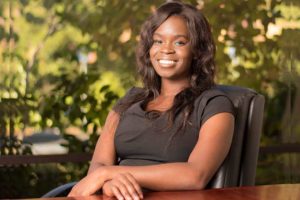 After six months, Oyekunle realized that accounting wasn’t for her — but she was interested in investment banking. She began looking at Master of Science in Finance (MSF) Programs to help kick-start her career in investment banking and was attracted by Vanderbilt’s hands-on career center and MBA-level classes.

Getting Started in Banking

“Having worked with her to prepare, I knew she had tremendous value to offer and a strategy for messaging it. Her success as a collegiate athlete also suggested she was no stranger to performing under pressure,” Gore said.

The hard work paid off early, when Oyekunle connected with alumni working at Jefferies during the Wall Street Trek. They were so impressed by her performance they invited her to formally interview with the firm, along with a few other students. It was her first bank interview, and she aced the process, receiving and accepting an offer from Jefferies before the end of the first Mod.

“A few minutes after witnessing her first handshake on Wall Street, I knew she wouldn’t be on the market much longer,” Gore recalled.

A few minutes after witnessing her first handshake on Wall Street, I knew she wouldn’t be on the market much longer. -Blake Gore

Oyekunle moved to New York City and started her job with Jefferies following graduation. After several months on the job, she decided that she didn’t want to stay in investment banking forever and began considering next steps.

She considered transferring over to the private equity side but decided that didn’t fit well with her future goals either. Eventually, she hit upon a financial career that did appeal to those goals: venture capital, with a concentration in the technology sector, which is one of her passions.

“I was very focused on investment banking, and it worked out well for me. But I think if I had spent more time talking to other people and figuring out what I wanted to do — I probably would have realized early on that VC was a really good fit,” she said.

Oyekunle acknowledges that, during her career search at Vanderbilt, she never thought much beyond that first job in investment banking, or even seriously considered other financial services careers.

“If I hadn’t got my job (at Jefferies), I probably would have been applying to investment banking internships or jobs until graduation, given how focused I was on it…My goal was to get into investment banking, and then figure out what other paths made sense,” she said.

Obviously, the career management resources at Owen helped Oyekunle secure her desired job in investment banking. But she also credits the broad range of MSF classes with preparing her to make the switch to venture capital.

“You’re doing a very specific type of finance when you’re in investment banking. In the MSF program, on the other hand, we got exposed to a much wider range of different types of finance,” she said. “That’s something I never would have gotten exposure to if I’d gone straight into banking right after undergrad.”

You’re doing a very specific type of finance when you’re in investment banking. In the MSF program, on the other hand, we got exposed to a much wider range of different types of finance. – Ronke Oyekunle

Oyekunle began job searching and found a position as an associate at NextEquity Partners, a venture capital firm that focuses on growth-stage technology companies. Earlier this year, she moved across the country from New York City to San Francisco to start the next chapter of her career. She greatly enjoys researching promising startups and technology trends and becoming part of the companies’ growth journeys by investing in them.

“What venture capital gives you the opportunity to do is learn about all of these startups, either when they’re in the early stage or the growth stage or whenever it is, and be at the foreground of really exciting technology development,” she said.

Oyekunle doesn’t regret her time in investment banking, but she counsels current and prospective students not to get too focused on banking at the expense of other options. She points to her own experience as proof that keeping an open mind can lead to a more fulfilling career.

“Banking was a good experience for me, in the sense that it’s helped me with what I wanted to do and gave me a good skill set, but it’s not the only avenue that you could have gone to get (into venture capital),” she said. “There are probably other career paths that are just as interesting to you that might be a really fit for your long-term career…Take the time and do a little bit of research and see what else is out there. And you can do that at the same time you’re pursuing banking.”

To learn more about the Master of Science in Finance, visit our program page.